Before its 1995 launch, no one knew what a spectacular comet finder the SOHO spacecraft would be. It excels at spotting sungrazers, comets sweeping near the sun. 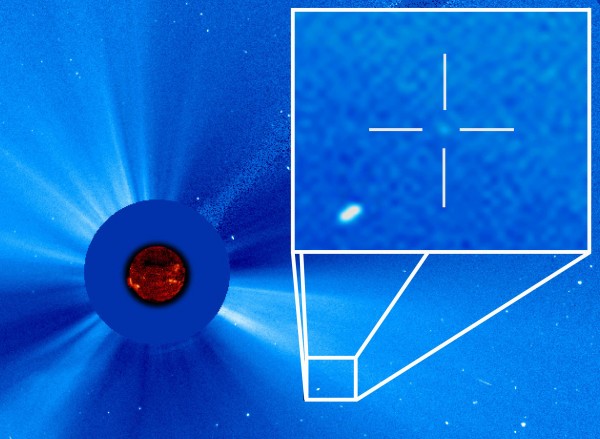 View larger. | The dot in the cross-hairs is a comet streaming toward the sun, seen on September 14, 2015 by the SOHO spacecraft. This is SOHO’s 3,000th comet since its 1995 launch. Image via ESA/NASA/SOHO.

NASA announced this week that the Solar and Heliospheric Observatory spacecraft – SOHO, a joint project of the European Space Agency and NASA – has discovered its 3,000th comet. In a September 15, 2015 statement, NASA called SOHO the greatest comet finder of all time:

SOHO is in a what’s called a halo orbit around the sun–Earth Lagrangian 1 point, which is a point between the Earth and sun where the pull of gravity from these two bodies is more or less balanced and where a spacecraft can keep its position with respect to the Earth and sun, with relative ease. SOHO’s mission is to observe the sun and the space between the planets. The spacecraft watches the sun’s disk and its surrounding environment, and it tracks the constant outward flow of the solar wind, as well as giant explosions of escaping gas called coronal mass ejections, or CMEs. When you hear that a large CME is headed Earth’s way, prompting predictions of awesome displays of the aurora borealis or northern lights, you’ll know that SOHO contributed to giving us that information. 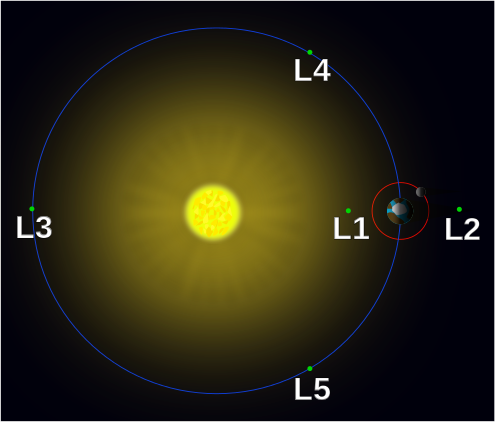 Lagrange points in the Sun–Earth system (not to scale)

Before its launch, no one realized what a spectacular comet finder SOHO would be. The spacecraft turns out to be excellent at spotting a special kind of comet called a sungrazer, which is a comet that passes extremely close to the sun at its closest point, sometimes within just a few thousand kilometers and sometimes actually plunging into the sun. Joe Gurman, mission scientist for SOHO at NASA’s Goddard Space Flight Center in Greenbelt, Maryland, commented in the NASA statement:

SOHO has a view of about 12-and-a-half million miles beyond the sun. So we expected it might from time to time see a bright comet near the sun. But nobody dreamed we’d approach 200 a year.

SOHO’s great success as a comet finder is dependent on the people who sift through its data – a task open to the world as the data is publicly available online in near-real time. A cadre of volunteer amateur astronomers dedicate themselves to searching the data via the NASA-funded Sungrazer Project. While scientists often search SOHO imagery for very specific events, various members of the astronomy community choose to comb through all the imagery in fine detail.

The 3,000th comet was originally spotted in the data by Worachate Boonplod, of Samut Songkhram, Thailand, who commented:

I am very happy to be part of a great milestone for SOHO’s comet project. I would like to thank SOHO, ESA and NASA for making this opportunity possible, including other fellow comet hunters who I have learned a lot from.

At almost 20 years old, NASA said, the SOHO mission is a respected elder in NASA’s Heliophysics System Observatory – the fleet of spacecraft that both watches the sun and measure its effects near Earth and throughout the solar system. SOHO is also bound to go down in spaceflight history as the most prolific comet-finder ever!

The video below has more.

Bottom line: SOHO – the Solar and Heliospheric Observatory spacecraft – has discovered its 3,000th comet. Before its 1995 launch, no one knew what a spectacular comet finder the SOHO spacecraft would be. It excels at spotting sungrazers, comets sweeping near the sun.