SN 1006 is a supernova remnant, a cloud of star debris initiated by a colossal stellar explosion in the year 1006. The debris has been expanding outward that year.

X-rays are a form of electromagnetic radiation: a form of starlight our eyes cannot see and that cannot penetrate Earth’s atmosphere. The first X-ray imaging telescope was launched into space in 1963, and thus, throughout 2013, astronomers are celebrating 50 years of X-ray astronomy. Today (April 17, 2013), NASA released the image below from its current X-ray flagship, the orbiting Chandra X-ray Observatory, in celebration of 50 years of X-ray astronomy. 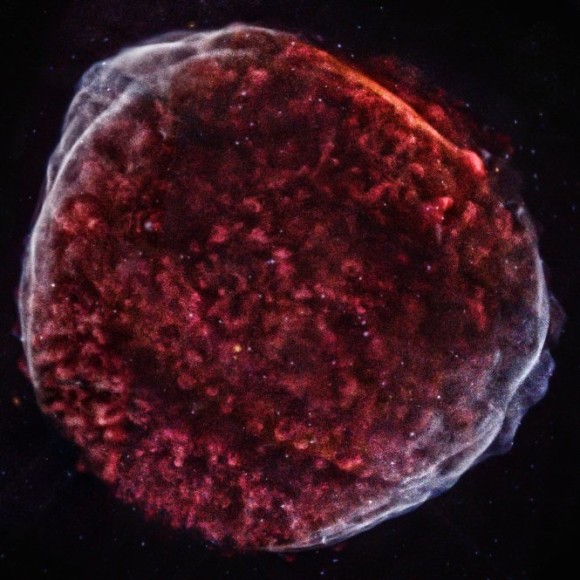 This object is called SN 1006, and it has a unique place in science history. On May 1, 1006 A.D., a new star appeared in Earth’s night sky. It was far brighter than Venus and visible during the daytime for weeks. Astronomers in China, Japan, Europe, and the Arab world all documented it. Today, we know it was a supernova, or colossal explosion of a white dwarf star, which sent its star material hurtling into space. 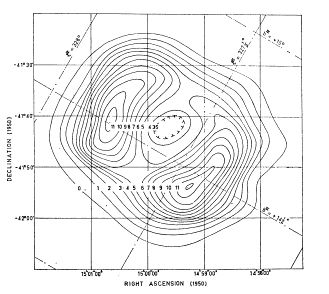 The first sign of SN 1006 in modern times came in 1965, when a radio telescope was used to create a contour map of emissions from the part of the sky where the “new star” had appeared in 1006. The map showed a shell-like structure, as you would expect from an expanding cloud of debris in space. Image via the Astronomical Journal, 1965.

It wasn’t until 1965 that the supernova remnant from this explosion – a vast cloud of debris that has been expanding for 10 centuries – was identified, first at radio wavelengths. In that year, Doug Milne and Frank Gardner used the Parkes radio telescope to demonstrate that the previously known radio source PKS 1459-41, near the star Beta Lupi, had the appearance of a 30-arcminute circular shell, much as you would expect from an expanding cloud of debris. Read Milne and Gardner’s paper here.

Also in the 1960s – when scientists were able to launch instruments and detectors above Earth’s atmosphere to observe the universe in X-rays – this supernova remnant, now called SN 1006, immediately made itself known. It was one of the first X-ray sources to be detected by the first generation of X-ray satellites.

Read more from NASA about SN 106