While planets in our solar system are known to have long-lasting storms, stars – until now – aren’t. This star storm has lasted at least two years.

Illustration of W1906+40, a relatively cool star marked by a raging storm near one of its poles. The storm is thought to be similar to the Great Red Spot on Jupiter. Image via NASA/JPL-Caltech.

Astronomers announced on December 10, 2015 that they’ve discovered what appears to be an extremely small star – a bit like a brown dwarf, or star-planet hybrid, but massive enough to produce thermonuclear reactions in its core – with a long-lasting storm on its surface. Astronomers compare the storm to Jupiter’s Great Red Spot, a hurricane-like feature known for hundreds of years. In the case of the star W1906+40, though, they’ve watched the storm rage for just two years.

Still, even two years is a surprise. While some planets in our solar system are known to have long-lasting storms, stars – until now – aren’t. Most storms observed on stars before this lasted only hours, or at most days. A NASA statement called W1906+40’s storm:

The storm is about as wide as three planet Earths and is thought to be near the star’s polar region.

The astronomers made the discovery using data from NASA’s Spitzer and Kepler space telescopes. Lead researcher John Gizis of the University of Delaware, Newark said:

We know this newfound storm has lasted at least two years, and probably longer. 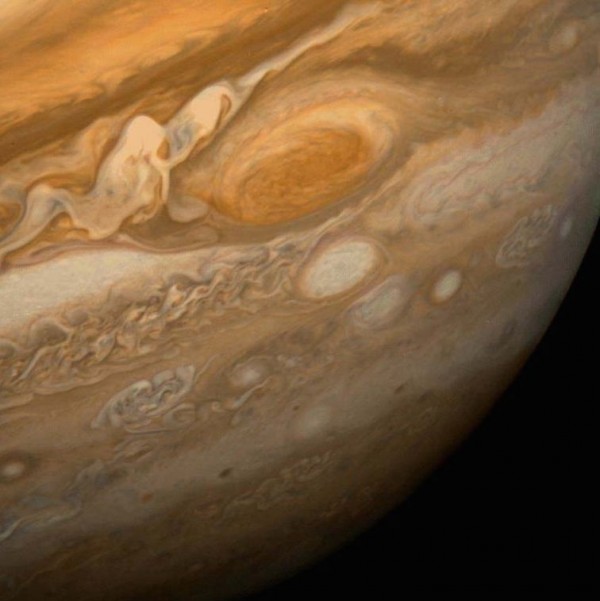 Jupiter’s Great Red Spot – which is nearly three times Earth’s diameter – and which has been seen on Jupiter for nearly 400 years. Image obtained by Voyager 1 on Feb. 25, 1979, via NASA.

You’ve heard of brown dwarfs? This star is an L-dwarf.

Brown dwarfs are typically considered failed stars because they don’t contain enough mass to ignite thermonuclear fusion reactions in their interiors. L-dwarfs are a sub-class of brown dwarfs. They are relatively cool, like brown dwarfs, but they do fuse atoms and generate light, much as our sun does.

That may sound scorching hot, but as far as stars go, it is relatively cool. Cool enough, in fact, for clouds to form in its atmosphere.

Gizis said the L-dwarf’s clouds are made of tiny minerals.

In the new study, the astronomers were able to study changes in the atmosphere of W1906+40 for two years. The NASA statement explained:

The L-dwarf had initially been discovered by NASA’s Wide-field Infrared Survey Explorer in 2011. Later, Gizis and his team realized that this object happened to be located in the same area of the sky where NASA’s Kepler mission had been staring at stars for years to hunt for planets.

Kepler identifies planets by looking for dips in starlight as planets pass in front of their stars. In this case, astronomers knew observed dips in starlight weren’t coming from planets, but they thought they might be looking at a star spot — which, like our sun’s “sunspots,” are a result of concentrated magnetic fields. Star spots would also cause dips in starlight as they rotate around the star.

Follow-up observations with Spitzer, which detects infrared light, revealed that the dark patch was not a magnetic star spot but a colossal, cloudy storm with a diameter that could hold three Earths. The storm rotates around the star about every 9 hours. Spitzer’s infrared measurements at two infrared wavelengths probed different layers of the atmosphere and, together with the Kepler visible-light data, helped reveal the presence of the storm.

While this storm looks different when viewed at various wavelengths, astronomers say that if we could somehow travel there in a starship, it would look like a dark mark near the polar top of the star.

These astronomer say they plan to look for other stars and brown dwarfs that have storms. Gizis commented:

We don’t know if this kind of star storm is unique or common, and we don’t why it persists for so long. 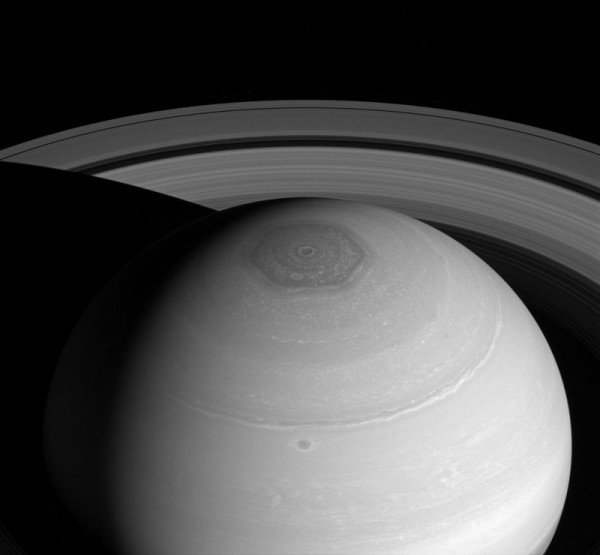 Saturn is another world in our solar system with a storm. One example is seen in this image from the Cassini spacecraft of Saturn’s mysterious hexagon. Inside the hexagon is a swirling polar vortex, which NASA has compares to a hurricane. Read more about this image. 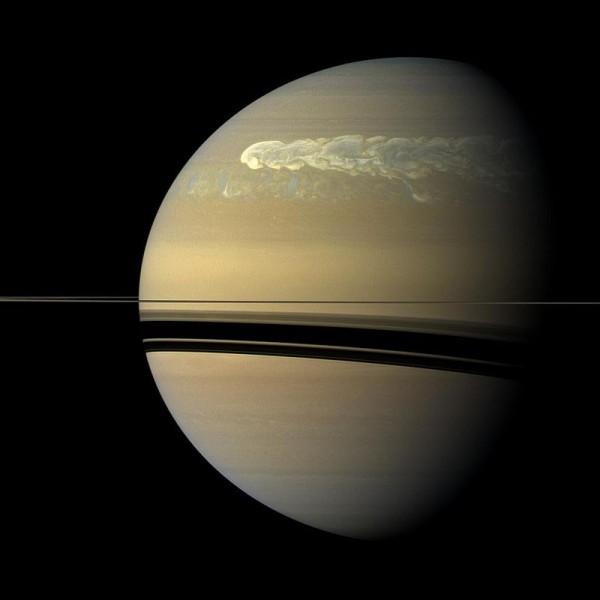 Here’s another kind of Saturn storm. This titanic feature – as wide as 9 Earths – was seen on Saturn by the Cassini spacecraft in February, 2011. Cassini watched the feature evolve for much of that year. Storms like these are thought to come and go on Saturn about every 30 years, which is the length of Saturn’s orbit around the sun. Read more about the great Saturn storm of 2011.

Bottom line: The star W1906+40 appears to have a storm in its atmosphere that has persisted for at least two years. Astronomers are comparing it to Jupiter’s Great Red Spot. Although other planets besides Jupiter in our solar system are known to have storm in their atmospheres, this the first star known to have such a long-lasting storm.