Asteroid passes near Earth on September 7. At its closest (18:18 UTC / 2:18 p.m. EDT), it’s about the same distance from Earth as weather and communications satellites. 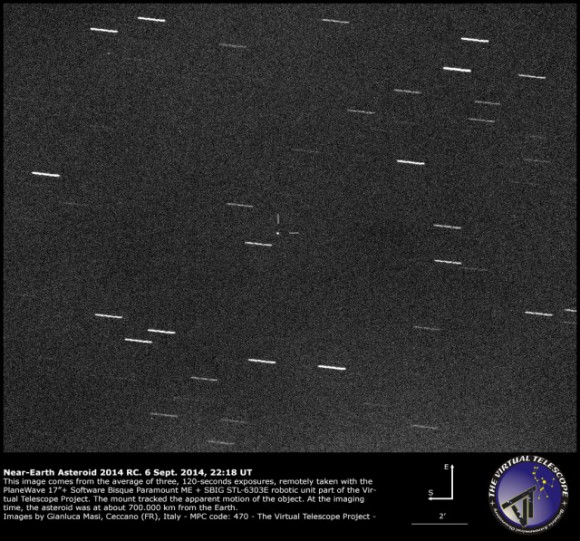 Asteroid 2014 RC will be roughly over New Zealand when it’s closest. From its reflected brightness, astronomers estimate that the asteroid is about 60 feet (20 meters) in size.

At the time of closest approach, asteroid 2014 RC will have an apparent magnitude (brightness) of about 11.5. That means it won’t be observable to the unaided eye. However, amateur astronomers with small telescopes might glimpse this near-Earth asteroid.

What if this asteroid had some closer and entered our atmosphere? It’s approximately as large as the Chelyabinsk meteor over Russia on February 15, 2013. The streak across the daytime sky from that meteor was brighter than the sun. Eyewitnesses said they felt intense heat from the fireball. The Chelyabinsk meteor created a shock wave in Earth’s atmosphere that broke windows in some 7,200 buildings in six Russian cities. Afterwards, about 1,500 people sought medical treatment, mostly from broken glass. Later, a large number of small meteorites were recovered from areas west of Chelyabinsk. 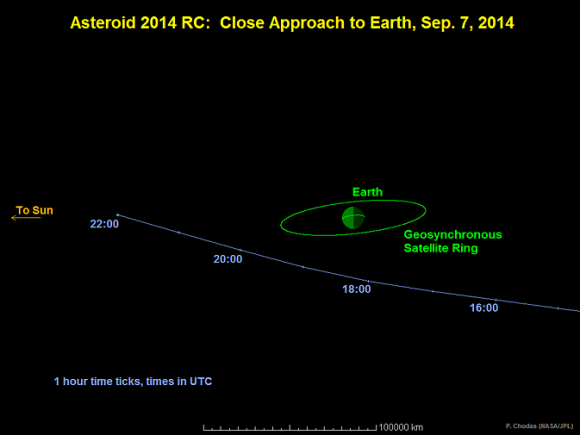 This graphic depicts the passage of asteroid 2014 RC past Earth on September 7, 2014. Times indicated on the graphic are Universal Time. Image via NASA/JPL-Caltech

At today’s asteroid pass, there does not appear to be any threat to Earth or satellites in orbit. Today’s asteroid will pass below Earth and the geosynchronous ring of communications and weather satellites. Researchers say this close approach creates a unique opportunity for them to observe and learn more about asteroids.

How close would today’s asteroid have to come to enter our atmosphere? To make a streak in the sky like the 2013 Chelyabinsk meteor, the asteroid would have to encounter the lower, denser part of Earth’s atmosphere. The dense part of the atmosphere (80 to 90% of the atmosphere as a whole) is called the “troposphere.” It’s where most of our weather happens. This layer of atmosphere is within about 7 miles of Earth’s surface. The outer atmosphere, or stratosphere, goes up only to about 29 miles. Today’s asteroid is passing at about 25,000 miles.

The orbit of asteroid 2014 RC will bring it back to our planet’s neighborhood in the future. There are no known possible impact dates in the next 100 years, but this asteroid will make another close approach to Earth on September 8–9, 2115 when it may come as close as 140,000 miles (220,000 km).

The asteroid’s orbit will be closely monitored in the year’s ahead. 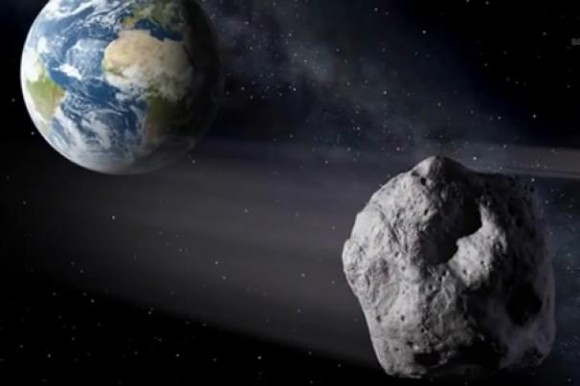 Bottom line: Asteroid 2014 RC – discovered on September 1-2, 2014 – will pass extremely near Earth on September 7. At its closest approach, the asteroid will be about one-tenth the distance from Earth to the moon, or about the same distance as geosynchronous weather and communication satellites.