The discovery is an important step to understanding how galaxies grow and sustain themselves over timescales as long as the age of the universe.

Astronomers reported in March 2012 that they’ve caught six distant galaxies in the act of capturing the ingredients needed for building stars.  The discovery of enriched gas flowing from intergalactic space onto the disks of these spiral galaxies might help solve a long-standing mystery: how do galaxies continue to form stars long after they should have run out of raw material?

Using the W.M. Keck Observatory in Hawai’i, researchers used spectroscopy – the breaking up of light into colors or wavelengths – to measure the speed of gasses in and around nearly 100 galaxies.  They found that in six of those galaxies, clouds of cool gas enriched with heavy elements, specifically magnesium and iron, are spilling down onto the disk of spiral arms where new stars are forming.

This is the first time that astronomers have been able to clearly detect galaxies with active star formation in the distant universe accreting intergalactic gas.  Just how distant?  The light from the most remote systems has taken over half the age of the universe – roughly eight billion years – to reach us! 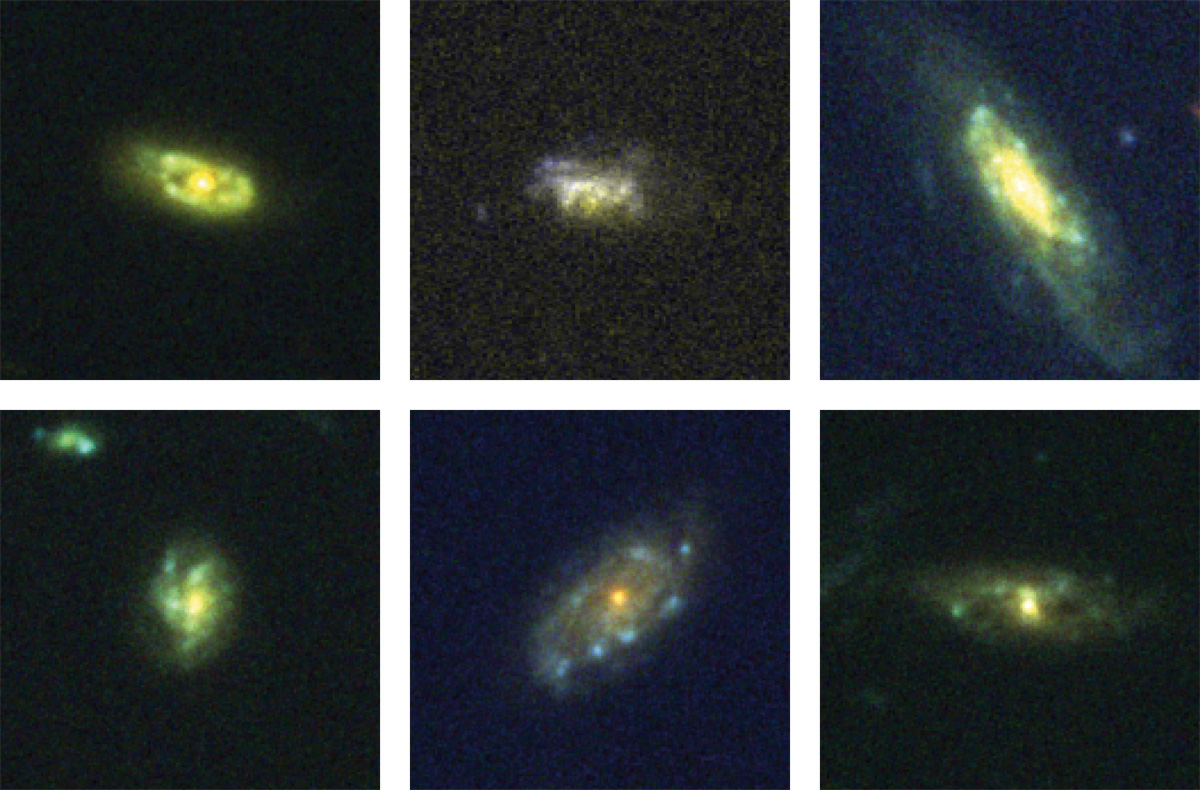 Images from the Hubble Space Telescope of the six galaxies caught in the act of recycling gas from intergalactic space. Credit: NASA/STScI

Why is this so exciting to astronomers?  Because it adds a crucial piece to a long-standing puzzle in astronomy. That is, how do galaxies build stars with the material available to them?  If you add up all the gas available in the Milky Way, for example, and then measure the rate at which our galaxy is forming stars (about one sun per year), the numbers just don’t add up.  The Milky Way should have run out of star building material some ten billion years ago.

Other galaxies have exactly the same problem.  And yet, we see galaxies – our own included – continuing to give birth to stars.  Clearly, there must be another source of material. Our galaxy, and others like it, must somehow be replenishing their supplies of interstellar gas.

These new observations, reported in the March 10, 2012 issue of The Astrophysical Journal Letters, show very distant galaxies doing just that.  But this raises another question: where is this gas coming from?  There are a couple of possibilities.

One option is that these galaxies are eating other galaxies.  We already know that galaxies grow by cannibalizing one another.  The Milky Way is currently consuming two satellite galaxies of its own: the Magellanic Clouds only visible from Earth’s Southern Hemisphere.  But there’s another intriguing possibility. These galaxies might, in fact, be recycling their own gas.

The Magellanic Clouds – satellite galaxies of the Milky Way – dump star building material on to our galaxy via a bridge of hydrogen gas called the Magellanic Stream. Image credit: European Southern Observatory via Wikipedia

Whether through intense winds from very massive, luminous stars or shocks from supernovae, galaxies can be a bit sloppy with their food, throwing it out into intergalactic space. This can set up a “galactic fountain” where gas is shot out of the galaxy and then rains back down to be incorporated into future generations of stars and planets. Computer simulations have demonstrated that this is certainly feasible. But up until now, no active star forming galaxy in the distant universe has ever been observed doing so.

The data in hand aren’t enough to say exactly what the source of the infalling gas is.  Because we are looking at these galaxies edge on, it is very difficult to measure how much gas they might be blowing out of their galactic poles, while they are simultaneously collecting matter from intergalactic space.  But these data are an important step to better understanding how galaxies grow and sustain themselves over timescales as long as the age of the universe.

Bottom line: Astronomers have caught six distant galaxies in the act of capturing the ingredients needed for building stars.  The paper on this finding, whose first author is Kate Rubin of UC Santa Cruz, was published in March 2012 in The Astrophysical Journal Letters. This is the first time that researchers have been able to clearly detect galaxies with active star formation in the distant universe accreting intergalactic gas. These observations may help answer the question of how galaxies continue to create stars long after they should have run out of the raw material needed to do so.