Reports from NOAA and elsewhere predict a chance of significant auroras, possibly observable as far south as the northern U.S. and maybe even farther south. 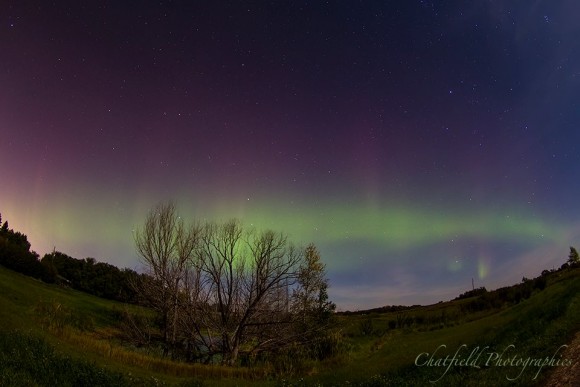 Due to two recent events on the sun – including an X-flare from Active Region 2158 on the sun on Wednesday (September 10, 2014) – reports from NOAA and elsewhere predict good chances for significant auroral displays. Auroras will be possibly observable at latitudes as far south as the northern U.S. states including, for example, Wisconsin, Michigan, and New York, and maybe even farther south. Spaceweather.com reports that the first of two CMEs, or coronal mass ejections, from these events has already struck Earth’s atmosphere:

The first of two CMEs expected to hit Earth’s magnetic field on Sept. 12 has arrived, and a minor (G1-class) geomagnetic storm is underway as a result of the impact. The second and potentially more powerful CME is still en route. NOAA forecasters say geomagnetic storming could become strong (G3-class) during the late hours of Sept. 12 and Sept 13 after the second CME arrives.

Although the specifics can’t be known exactly, the chances for seeing an aurora are generally better between midnight and dawn, even with a bright moon.

Chances of observing the aurora vary greatly depending on location, weather conditions and timing. But how to observe is simple, similar to that of observing meteor showers.

In this case, find a very dark location with a good view to the north.

Take reasonable precautions for personal safety and comfort… and be patient. A chaise lounge, warm clothes and bug spray may be worthwhile.

Although the best times cannot be predicted with great accuracy very far in advance, monitor these pages for the best and latest data: 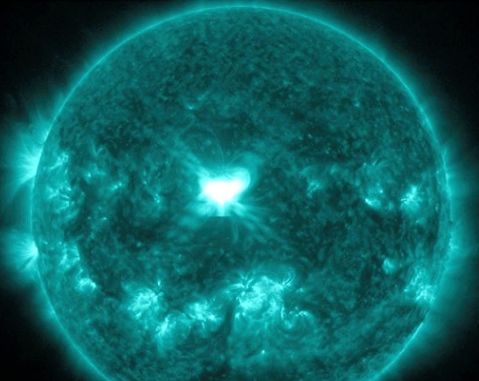 An intense, X-class solar flare occurred on Wednesday, September 10, 2014. It from AR2158, shown here as a bright area on the sun. This is the second major flare in two days from AR2158. Watch for auroras Friday night! Image via NASA.

Animation of the coronal mass ejection (CME) from AR2158 that occurred on September 9, 2014 via Spaceweather.com.

Bottom line: The night of September 12 and morning of September 13, 2014 may feature auroras at latitudes like those of the middle United States, thanks to high activity, including an X-flare, on the sun.