A signal from the 1st stars

It’s potentially one of the most exciting astronomical discoveries of the decade. Astronomers have detected a signal from the 1st stars to form in the universe.

A signal caused by the very first stars to form in the universe has been picked up by a tiny but highly specialised radio telescope in the remote Western Australian desert.

Details of the detection are revealed in a paper published February 28, 2018, in Nature, and tell us these stars formed only 180 million years after the Big Bang.

It’s potentially one of the most exciting astronomical discoveries of the decade. A second Nature paper, also published February 28, links the finding to possibly the first detected evidence that dark matter, thought to make up much of the universe, might interact with ordinary atoms.

Tuning in to the signal

This discovery was made by a small radio antenna operating in the band of 50-100 Mhz, which overlaps some well known FM radio stations (which is why the telescope is located in the remote WA desert).

What has been detected is the absorption of light by neutral atomic hydrogen gas, which filled the early universe after it cooled down from the hot plasma of the Big Bang.

At this time (180 million years after the Big Bang) the early universe was expanding, but the densest regions of the universe were collapsing under gravity to make the first stars. 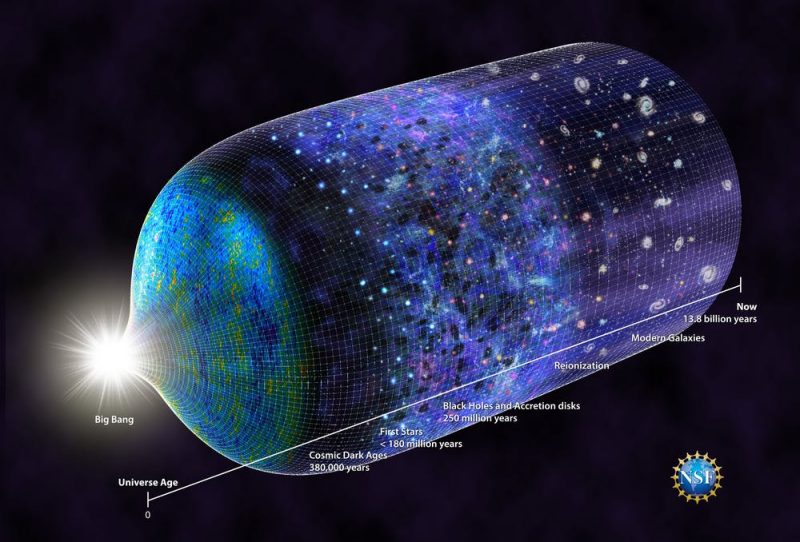 A timeline of the universe, updated to show when the first stars emerged emerged by 180 million years after the Big Bang. Image via N.R. Fuller, National Science Foundation.

The formation of the first stars had a dramatic effect on the rest of the universe. Ultraviolet radiation from them changed the electron spin in the hydrogen atoms, causing it to absorb the background radio emission of the universe at a natural resonant frequency of 1,420 MHz, casting a shadow so to speak.

Now, 13 billion years later, that shadow would be expected at a much lower frequency because the universe has expanded nearly 18-fold in that time.

Astronomers had been predicting this phenomenon for nearly 20 years and searching for it for 10 years. No one quite knew how strong the signal would be or at what frequency to search.

Most expected it would take quite a few more years post 2018.

But the shadow was detected at 78 MHz by a team led by astronomer Judd Bowman from Arizona State University.

Amazingly this radio signal detection in 2015-2016 was done by a small aerial (the EDGES experiment), only a few meters in size, coupled to a very clever radio receiver and signal processing system. It’s only been published now after rigorous checking. 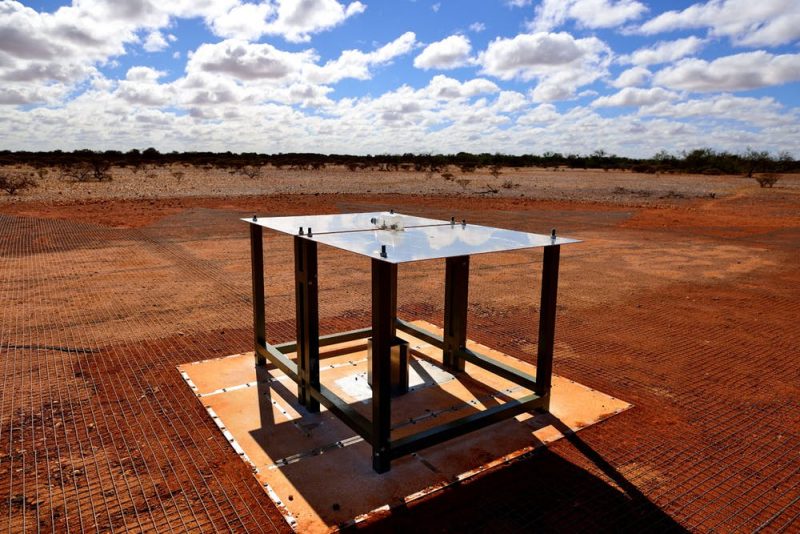 This is the most important astronomical discovery since the detection of gravitational waves in 2015. The first stars represent the start of everything complex in the universe, the beginning of the long journey to galaxies, solar systems, planets, life and brains.

Detecting their signature is a milestone and pinning down the exact time of their formation is an important measurement for cosmology.

This is an amazing result. But it gets better and even more mysterious and exciting. 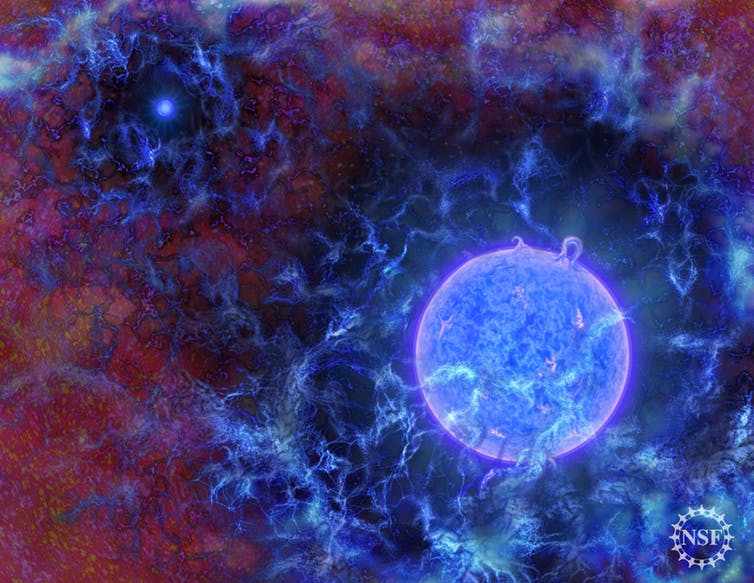 An artist’s rendering of how the first stars in the universe may have looked. Image via N.R. Fuller, National Science Foundation.

The signal is twice as strong as expected, which is why it has been detected so early. In the second Nature paper, astronomer Rennan Barkana, from Tel Aviv University, said it is quite hard to explain why the signal is so strong, as it tells us the hydrogen gas at this time is significantly colder than expected in the standard model of cosmic evolution.

How do you make the atoms colder? You have to put them in thermal contact with something even colder, and the most viable suspect is what is known as cold dark matter.

Cold dark matter is the bedrock of modern cosmology. It was introduced in the 1980s to explain how galaxies rotate – they seemed to spin much faster than could be explained by the visible stars and an extra gravitational force was needed.

We now think that dark matter has to be made of a new kind of fundamental particle. There is about six times more dark matter than ordinary matter and if it was made of normal atoms the Big Bang would have looked quite different to what is observed.

As for the nature of this particle, and its mass, we can only guess.

So if cold dark matter is indeed colliding with hydrogen atoms in the early universe and cooling them, this is a major advance and could lead us to pin down its true nature. This would be the first time dark matter has demonstrated any interaction other than gravity.

Here comes the ‘but’

A note of caution is warranted. This hydrogen signal is very difficult to detect: it is thousands of times fainter than the background radio noise even for the remote location in Western Australia.

The authors of the first Nature paper have spent more than a year doing a multitude of tests and checks to make sure they have not made a mistake. The sensitivity of their aerial needs to be exquisitely calibrated all across the bandpass. The detection is an impressive technical achievement but astronomers worldwide will be holding their breath until the result is confirmed by an independent experiment.

If it is confirmed then this will open the door to a new window on the early universe and potentially a new understanding of the nature of dark matter by providing a new observational window in to it.

This signal has been detected coming from the whole sky, but in the future it can be mapped on the sky, and the details of the structures in the maps would then give us even more information on the physical properties of the dark matter.

Today’s publications are exciting news for Australia in particular. Western Australia is the most radio quiet zone in the world, and will be the prime location for future mapping observations. The Murchison Widefield Array is in operation right now, and future upgrades could provide exactly such a map.

One of 128 tiles of the Murchison Widefield Array (MWA) telescope. Image via Flickr/Australian SKA Office/WA Department of Commerce.

This is also a major science goal of the multi-billion dollar Square Kilometre Array, located in Western Australia, that should be able to provide much greater fidelity pictures of this epoch.

It is extremely exciting to look forward to a time when we will be able to reveal the nature of the first stars and to have a new approach via radio astronomy to tackle dark matter, which has so far proved intractable.

Let’s hope the governments of the world, or at least Australia, can keep the frequency of 78 MHz clean of pop music and talk shows so we can continue to observe the birth of the universe.

Bottom line: Astronomers have detected a signal from the first stars to form in the universe.