Should the Higgs boson have caused our universe to collapse?

British cosmologists have concluded that the universe should not have lasted for more than a second after the Big Bang. 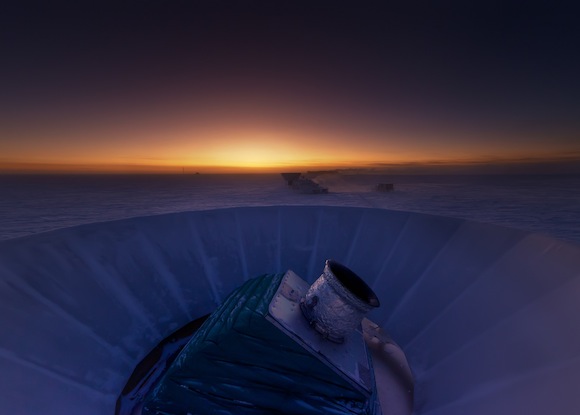 View larger. The BICEP2 telescope at twilight, which occurs only twice a year at the South Pole. The MAPO observatory (home of the Keck Array telescope) and the South Pole station can be seen in the background.

British cosmologists are puzzled: they predict that the universe should not have lasted for more than a second. This startling conclusion is the result of combining the latest observations of the sky with the recent discovery of the Higgs boson. Robert Hogan of King’s College London (KCL) presents the new research on June 24 at the Royal Astronomical Society’s National Astronomy Meeting in Portsmouth.

After the universe began in the Big Bang, it is thought to have gone through a short period of rapid expansion known as ‘cosmic inflation.’ Although the details of this process are not yet fully understood, cosmologists have been able to make predictions of how this would affect the universe we see today.

In March 2014, researchers from the BICEP2 collaboration claimed to have detected one of these predicted effects. If true, their results are a major advance in our understanding of cosmology and a confirmation of the inflation theory, but they have proven controversial and are not yet fully accepted by cosmologists.

In the new research, scientists from KCL have investigated what the BICEP2 observations mean for the stability of the universe. To do this, they combined the results with recent advances in particle physics. The detection of the Higgs boson by the Large Hadron Collider was announced in July 2012; since then, much has been learnt about its properties.

Measurements of the Higgs boson have allowed particle physicists to show that our universe sits in a valley of the ‘Higgs field’, which describes the way that other particles have mass. However, there is a different valley which is much deeper, but our universe is prevented from falling into it by a large energy barrier.

This is an unacceptable prediction of the theory because if this had happened we wouldn’t be around to discuss it.

Perhaps the BICEP2 results contain an error. If not, there must be some other – as yet unknown – process which prevented the universe from collapsing. Hogan said:

If BICEP2 is shown to be correct, it tells us that there has to be interesting new particle physics beyond the standard model.