Time-lapse movie of plasma jet blasting from a black hole in a distant galaxy. It shows a rear-end collision between two high-speed knots of the jet’s matter.

Scientists assembled this time-lapse movie of a plasma jet blasting from a black hole in a distant galaxy from 20 years of Hubble Space Telescope observations. The video shows the core of the elliptical galaxy NGC 3862, located some 260 million light-years from Earth. It shows a rear-end collision between two high-speed knots of matter in the jet. New analysis suggests that shocks like these, produced by collisions within black hole jets, further accelerate particles in the jets and brighten the regions of colliding material. A team led by astronomer Eileen Meyer of the Space Telescope Science Institute in Baltimore published this study in the May 28, 2015 issue of the journal Nature.

Black hole jets in distant galaxies are commonly seen, but not well understood. They appear to transport energetic plasma – a form of high-temperature ionized gas, composed of free electrons and free atomic nuclei – in a confined beam from the black hole.

NGC 3862 – also known as 3C 264 – is located in the direction of our constellation Leo the Lion. It’s one of only a few active galaxies with jets seen in visible light. 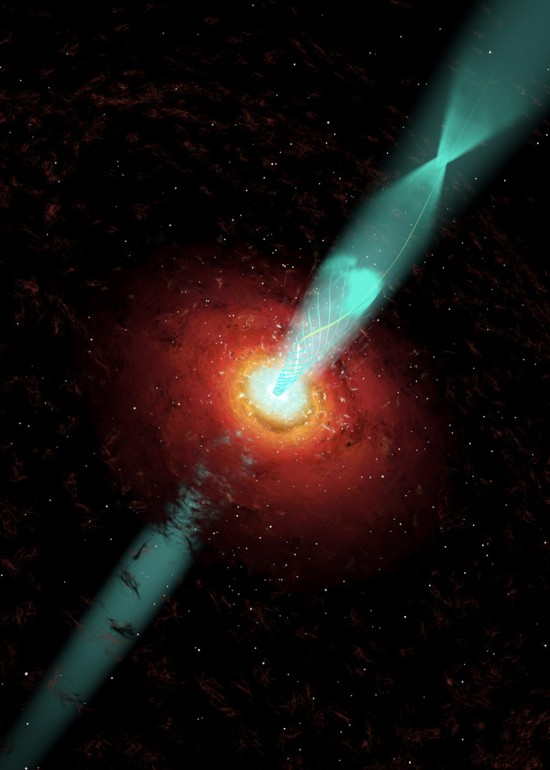 View larger. | Artist’s concept of the jet from NGC 3862. Image via Cosmovision/Wolfgang Steffen/UNAM.

NASA said in a statement on May 27:

The jet from NGC 3862 has a string-of-pearls structure of glowing knots of material. Taking advantage of Hubble’s sharp resolution and long-term optical stability, Eileen Meyer assembled a video from archival data to better understand jet motions. Meyer was surprised to see a fast knot with an apparent speed of seven times the speed of light catch up with the end of a slower-moving, but still superluminal, knot along the string.

By the way, superluminal motions have been observed before in the jets of supermassive black holes. The material appears to be moving at speeds several times the speed of light. These fast speeds are contrary to our understanding of light, thought by physicists to be the fastest-moving substance in the universe. Even light can’t move faster than light speed, according to what we know today of the physics of our universe. Astronomers explain it by saying that superluminal motion is an optical illusion caused by the jets orientation close to our line of sight and by the very fast speeds of the material moving within them. Read more about superluminal motion here.

Meyer said that knots of material colliding into one another in an extragalactic black hole jet have never been seen before. She said that, as the knots continue merging, they will brighten further in the coming decades, adding:

This will allow us a very rare opportunity to see how the energy of the collision is dissipated into radiation.

Meyer is currently making a Hubble-image video of two more jets in the nearby universe, to look for similar fast motions. She notes that these kinds of studies are only possible because of the long operating lifetime of Hubble, which has now been looking at some of these jets for over 20 years. 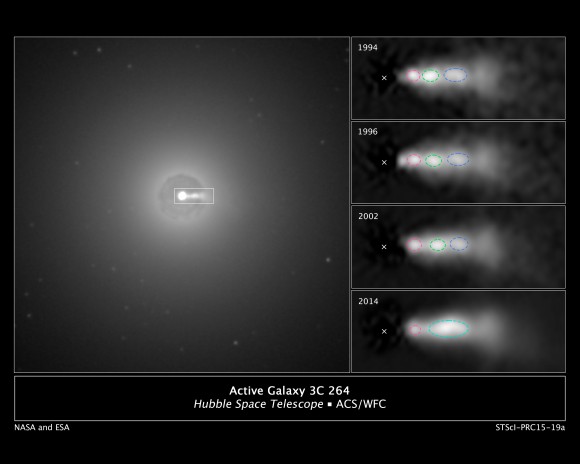 View larger. | In the central region of galaxy NGC 3862 an extragalactic jet of material can be seen at the 3 o’clock position (left). Hubble images (right) of knots (outlined in red, green and blue) shows them moving along the jet over 20 years. The “X” is the black hole. Image via NASA, ESA, and E. Meyer STScI

Bottom line: Time-lapse movie of a plasma jet blasting from a black hole in a distant galaxy, assembled from 20 years of Hubble Space Telescope observations, shows a rear-end collision between two high-speed knots of matter in the jet.