The search for signals from intelligent beings beyond Earth will continue when the SETI Institute reboots its array of 42 antennas north of San Francisco.

After a four-month hiatus, the Search for Extra-Terrestrial Intelligence (SETI) Institute in California is making plans to reboot its Allen Telescope Array (ATA), a large group of 42 small antennas that scan the skies for radio waves that may signal intelligent life. The reboot, planned for September 2011, is possible due to a successful online fundraising campaign. 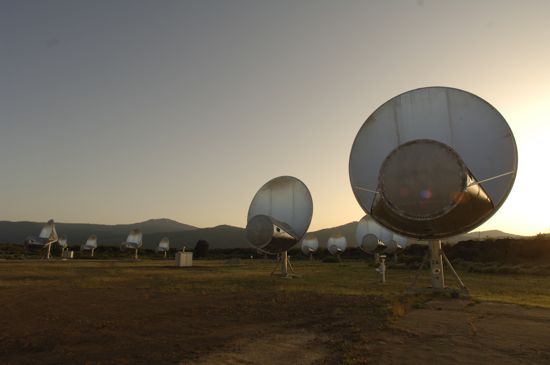 In 2001, Microsoft co-founder Paul Allen donated enough funds to begin technology development and construction of the 42 antennas that now comprise the ATA. The array began functioning in October 2007. It is used in radio astronomy observations both within and outside of the Milky Way, but its primary function is to search for signals of extraterrestrial life. It does this by searching for “narrow-band signals,” signals that are too precise to be generated by pulsars, quasars and other natural astronomical objects.

In an April 22, 2011 letter, SETI Institute CEO Tom Pierson announced that while the institute would continue working, the 42 antennas of the ATA would be be shut down to safe mode due to lack of funding. ATA is located at the Hat Creek Radio Observatory run by the University of California, Berkeley. In the letter, Pierson wrote:

Unfortunately, today’s government budgetary environment is very difficult, and new solutions must be found.  [National Science Foundation] University Radio Observatory funding for HCRO has been reduced to approximately one-tenth of its former level.  This is compounded by growing state of California budget shortfalls that have severely reduced the amount of state funds available to the Radio Astronomy Lab.  Combined, these factors have resulted in the current decision by UCB to reduce operations of the Hat Creek site to a hibernation mode, pending future funding or some alternative solution.  Hibernation means that, starting this week, the equipment is unavailable for normal observations and is being maintained in a safe state by a significantly reduced staff. 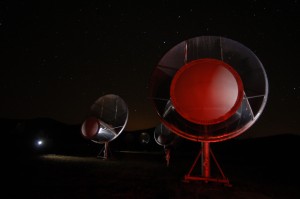 As the SETI antenna array was shutting down, NASA’s Kepler planet-hunting mission was discovering swaths of exoplanets orbiting distant stars. That is one reason SETI said it created SETIStars on June 9, 2011 – creating a focused effort to draw donations from the institute’s supporters. The goal was to raise $200,000. At this writing (August 27, 2011), the site has drawn $226,406 from 2,650 donors, including names like former NASA astronaut Bill Anders, Contact star Jodie Foster, and science fiction author Larry Niven.

While the SETIStars drive sought donations specifically to revive the ATA, any additional donations will be put toward the ongoing operational needs of the array and the SETI Institute itself. Donations are still being accepted here.

In addition to the ATA, SETI is home to the Carl Sagan Center for the Study of Life in the Universe and the Center for Education and Public Outreach.

The Allen Telescope Array at the Hat Creek Radio Observatory – 290 miles (470 km) northeast of San Francisco – was planned to consist of 350 antennas when completed, but funding shortfalls have made that goal difficult to obtain.

Bottom line: The search for signals from intelligent beings beyond Earth will continue when the SETI Institute reboots its array of 42 antennas north of San Francisco. The reboot, planned for September 2011, was made possible by a successful online fundraising campaign. Donors include former astronaut Bill Anders, film star Jodie Foster, and science fiction author Larry Niven.