Time will be 7 p.m. EDT this evening. People in a wide swath of U.S. mid-Atlantic states can see it, if skies are clear. 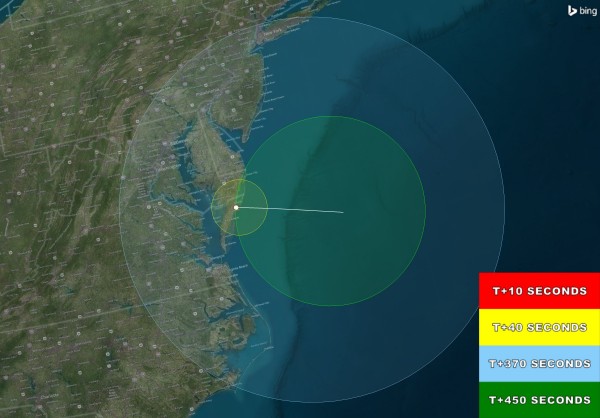 NASA’s next suborbital rocket launch is scheduled for Wednesday, October 7 – at 7 EDT – and, if you live in the mid-Atlantic region of the United States, you might get a glimpse of it. NASA said:

Approximately six minutes after launch, the sounding rocket will deploy four sub-payloads containing mixtures of barium and strontium will be released, creating a cloud that is blue-green and red in color.

Residents from Long Island, New York, 235 miles north of the launch site, to Morehead City, North Carolina, 232 miles south, 165 miles west in Charlottesville, Virginia — and everyone in between — could get a glimpse of the colorful evening launch.

The rocket will launch from the agency’s Wallops Flight Facility in Virginia. NASA said:

For more information about the flight test, visit: https://go.nasa.gov/1VzGPwk

Bottom line: The October 7, 2015 rocket launch from Wallops – visible across a wide swath of the U.S. mid-Atlantic region – is scheduled for between 7 and 9 p.m. EDT. The rocket will release payloads creating a cloud that is blue-green and red in color.