Mosaics of Pluto and Charon, created from your photos sent to NASA during this summer’s #PlutoTime campaign. 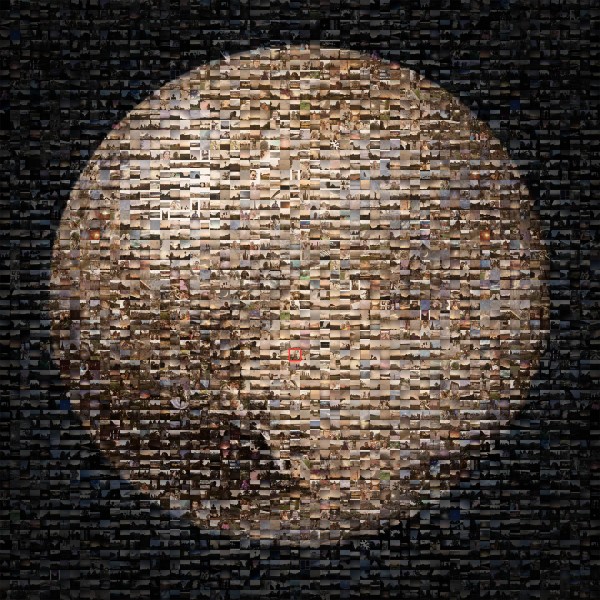 A photo of Pluto discoverer Clyde Tombaugh is embedded in this mosaic of hundreds of images shared during the #PlutoTime campaign. View larger. | Image credit: NASA/JPL

On October 20, 2015, NASA unveiled mosaics of Pluto and its largest moon Charon, made from your photos. The images represent the powerful global response to the popular #PlutoTime social media campaign.

The New Horizons science team – same people who sent a spacecraft whooshing past Pluto and Charon this past July – developed the Pluto Time concept and widget. They said they wanted people to experience the approximate sunlight level on Pluto at noon – generally equivalent to around dawn or dusk on Earth.

Thousands of those submissions have now been assembled into three stunning mosaics of Pluto, Charon, and a combined image of the two. The mosaics include not only dim skies on Earth, but famous landmarks, selfies, and even family pets. The files are so large that – at current resolution – they would make an 11×11-foot print.

View the #PlutoTime mosaic of Charon

View the #PlutoTime mosaic of Pluto and Charon

The #PlutoTime idea stemmed from a frequently-asked question of New Horizons scientists:

How are you going to take pictures of Pluto, given that it’s so far from the sun?

We realized that we could make a web tool that would estimate approximately when the light levels [on Earth] dropped to Pluto levels. We looked up tables of illumination levels during various stages of twilight – used to determine when streetlights come on and such – and determined how low the sun would need to be on a clear day to match Pluto.

After that, it was a matter of doing the math.

The Solar System Exploration Public Engagement team at NASA’s Jet Propulsion Laboratory (JPL) in Pasadena, California assembled the mosaics, using approximately 1,500 to 2,100 images for each. Images are occasionally repeated by the software to correctly fill in the colors and provide the proper shape of Pluto and its terrain.

The creators of the mosaic give a nod to Clyde Tombaugh, the American who discovered Pluto in 1930. If you zoom in on the inset in image at the top of this page, you can see a photo of Tombaugh and his homemade 9-inch telescope in the region of Pluto’s “heart,” informally named Tombaugh Region.

Bottom line: On October 20, 2015 NASA released mosaics of Pluto and its largest moon Charon, created from images in response to its popular Pluto Time social media campaign launched in June, 2015.