See how the moon moved in orbit yesterday

Illustration of how moon moved in contrast to triangle of objects in west after sunset – Mars, Saturn and star Spica – on August 21, 2012 as seen from around the world. 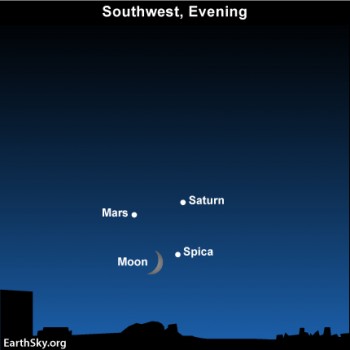 August 21, 2012. Chart not to scale. The photos below show a more realistic view. This chart shows you which object is which. The orientation of the planets to the horizon is the same in all the photos on this post.

Many EarthSky friends have been watching the beautiful triangle of objects in the west after sunset in August 2012. That triangle consists of two planets – Mars and Saturn – and the star Spica in the constellation Virgo. Then this week, as the waxing crescent moon moved through the scene, EarthSky Facebook friends from around the world posted their own photos of western twilight sky, showing us many wonderful and varied views of these bright objects in the night sky. Especially yesterday, our friends shared an amazing assortment of photos from all over the world, which you might still be able to see by clicking on “Recent Posts by Others” on EarthSky’s Facebook page. I’ve assembled a few of their photos below to show you a remarkable fact – that is, the moon moves in orbit around Earth. We all know it does. But did you know you can see the moon’s orbital motion as it travels across Earth’s sky, over the course of a day? The images below illustrate that fact well.

Let’s start with the view on Monday night, August 20. The image below shows how we in the U.S. saw the planets, star Spica and moon.

By the time the line of sunset on Earth had crossed the Pacific, crossing the International Dateline, the moon had had time to move in orbit slightly and so was closer to the planets in the night sky. The photo below is from the Philippines after sunset on August 21, 2012.

You could really begin to see the difference by the time sunset came to European and African longitudes yesterday. The next two images are both from islands in the Mediterranean Sea. 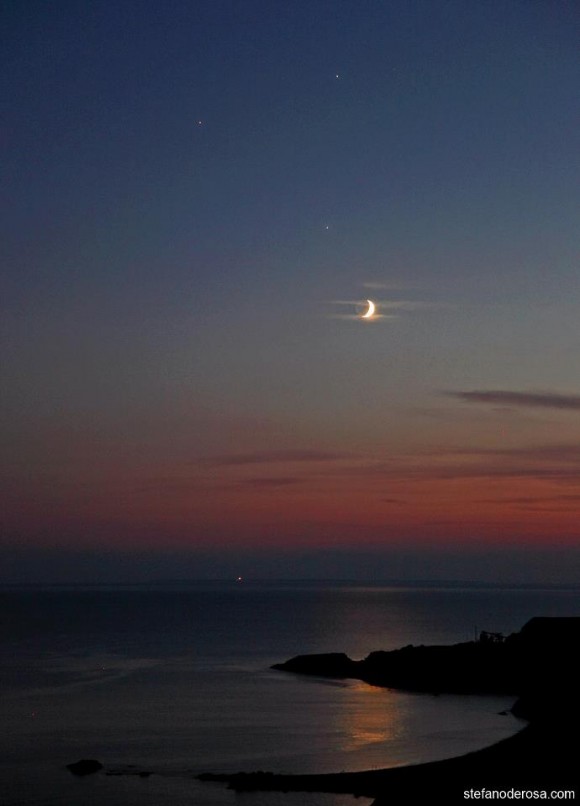 Photo via EarthSky Facebook friend Stefano De Rosa on the island of Isola d’Elba in the Mediterranean. Thanks, Stefano! Beautiful as always. 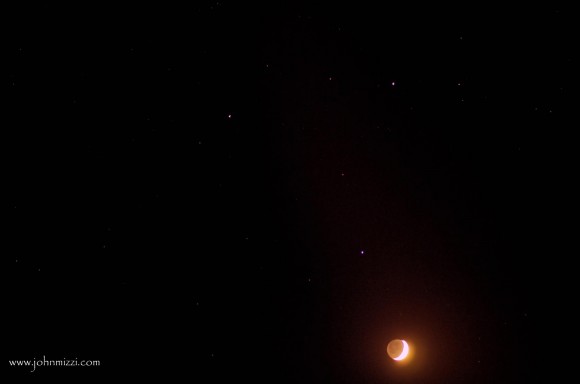 Another view of Saturn, Mars, the star Spica and last night’s waxing crescent moon, also taken August 21 from the island of Gozo (Malta) in the Mediterranean by EarthSky Facebook friend John Michael Mizzi. Thank you for sharing, John.

But of course the moon kept moving. It completes its orbit around the Earth in approximately 27.3 days (with respect to the stars). The moon moves around Earth with a mean orbital velocity of 1,023 meters per second. That’s fast, but space is big! As seen from Earth’s surface, the moon moves across the sky relative to the stars by an amount roughly equal to its own angular diameter – its own apparent diameter on Earth’s sky dome – each day. Or look at it another way. Because of its motion in orbit around Earth, the moon moves on our sky’s dome by about 0.5 degrees per hour – about the distance on the sky’s dome of your little finger held at arm’s length.

By the time sunset came to North America last night, the moon was much closer to the planets and Spica. Why? Because the moon had moved in its orbit. The next three images show how the moon traveled on Earth’s sky, due to its orbital motion, as the line of sunset crossed the U.S. last night.

Photo via EarthSky Facebook friend Chris Levitan on the coast of Oregon, overlooking the Pacific Ocean. Moon, planets and star Spica on August 21, 2012. Thank you, Chris.

And finally here’s an image from the Philippines again, taken a day later than the photo by Raven Yu above. This one shows the moon – with Mars, Saturn and the star Spica – on the evening of August 22, 2012.

Photo from Jv Noriega in Manila, Philippines. Moon with western triangle of Mars, Saturn and star Spica on August 22, 2012. Contrast this photo to the one by Raven Yu, at the top of this post, and you’ll see how much the moon moved in orbit – as translated onto Earth’s sky dome – in one day. Thanks, Jv!

Bottom line: The moon moves in orbit around Earth. As seen on Earth’s sky dome, it moves by about the width of its own diameter each day. This post illustrates how the moon appeared to move in contrast to the triangle of objects in the west after sunset – planet Mars, planet Saturn and star Spica – on August 21, 2012 as seen from around the world. Photos provided by EarthSky Facebook friends. Thanks, everybody! On any ordinary day, if you look outside at the same time each night, you can see the moon’s motion from a single spot on Earth, from one night to the next.