See Comet ISON move in front of the stars

Justin Ng in Singapore acquired this time-lapse video of Comet ISON – this year’s most-watched comet – over 69 minutes on October 27, 2013.

Justin Ng in Singapore, who recently contributed a photo to EarthSky’s Today’s Image series, contacted us again this week with a wonderful time-lapse video of Comet ISON, this year’s most-watched comet. Justin used a telescope and special camera to capture this view of the comet, which is not yet visible to the eye, but which many hope will become visible before this year ends. He acquired the time-lapse over 69 minutes on October 27, 2013.

Journey of Comet ISON on 27 October 2013 from Justin Ng Photo on Vimeo.

Notice the graceful motion of the comet in front of the stars. With the eye alone, you would be challenged to detect any motion of a comet in a single night, much less in only 69 minutes. But the comet is indeed moving in front of the stars, just as the moon or planets move and for the same reason: because it is closer to us than the stars. The comet’s motion is visible here because the field of view is so small. Justin explained:

The primary reason why the comet appears to be moving fast across the sky within 69 minutes is because of the smaller field of view, which makes a very deep space object looks big on the screen and move faster. This is evident if you were to use any planetarium softwares and try to zoom in closely into Comet ISON, you will see its moving faster and faster as the field of view becomes narrower.

I used a 20″ telescope and a specialized monochrome CCD camera to capture it and the field of view is 0.55 degrees. This is extremely narrow and the smaller the field of view, the faster an object will appear to move. Each exposure was only 90 seconds and so when you looked into the time-lapse in the slow motion part, each frame represent the distance covered by Comet ISON within 90 seconds. Which is logical because Comet ISON is traveling at a speed of 684,000kph (425,000mph).

Currently comet is not visible to naked eyes due to its magnitude of about +8.1 and the magnitude of the 2 brightest stars are at around +7, still beyond what naked eyes can see. However there have been reports that the comet is now visible for binoculars and medium-sized telescope.

The images used in the video is what you see in the RAW files. No other editing was done besides cropping the images to fit into 1920 resolution.

Justin had also sent a beautiful photo of ISON, taken on October 26. As he pointed out then, and as is still true as far as we’ve heard, the comet’s nucleus is still intact. That’s important, because sun-diving comets like ISON sometimes disintegrate as they draw closer to the sun that binds them in orbit, and a disintegrated Comet ISON would be much less likely to become visible in Earth’s sky. For now, Comet ISON is hanging in there, as this photo shows. 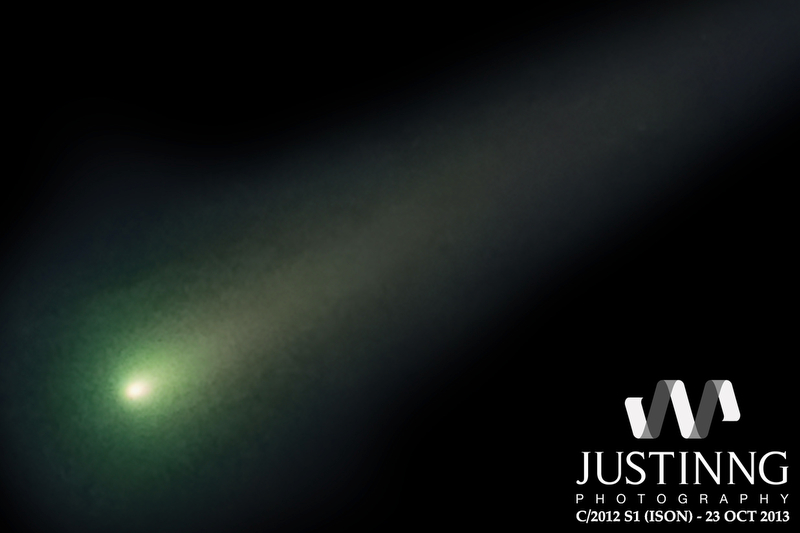 View larger. | Comet ISON on October 26, 2013 by Justin Ng in Singapore. When this photo was taken, the nucleus was still intact. Let’s hope it stays that way, and that ISON becomes visible to the eye! Click here to see more photos by Justin Ng.

Bottom line: Beautiful time-lapse video from Justin Ng in Singapore showing Comet ISON moving in front of the stars. Justin acquired the time-lapse over 69 minutes on October 27, 2013. The movement, which would be extremely difficult to detect with the eye alone over such a short time period, is visible in this video because Justin is using a telescope, and thus the field of view is very small.

Read about Comet ISON as a great binocular comet.