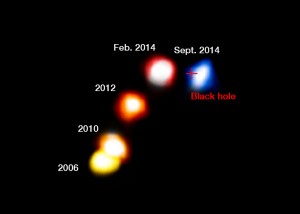 This annotated composite image shows the motion of the dusty cloud G2 as it closes in, and then passes, the supermassive black hole at the centre of the Milky Way. These new observations with ESO’s VLT have shown that the cloud appears to have survived its close encounter with the black hole and remains a compact object that is not significantly extended. The blobs have been colourised to show the motion of the cloud, red indicated that the object is receding and blue approaching. The cross marks the position of the supermassive black hole.

Thank you! Your submission has been received!
Oops! Something went wrong while submitting the form.
END_OF_DOCUMENT_TOKEN_TO_BE_REPLACED