Scientists have long said that Saturn’s glorious rings may be only temporary. New research confirms a “ring rain” onto Saturn that’ll leave the planet ringless in 300 million years, or sooner.

Saturn’s wide, iconic rings make this planet the telescopic showpiece of the solar system, but new research confirms the planet’s rings are only temporary. The new work was published December 17, 2018, in the peer-reviewed journal Icarus. It describes a process whereby ice particles from the rings are being pulled by gravity onto Saturn, falling as a dusty ring rain.

James O’Donoghue of NASA’s Goddard Space Flight Center is lead author of the new study. O’Donoghue said in a statement:

We estimate that this ‘ring rain’ drains an amount of water products that could fill an Olympic-sized swimming pool from Saturn’s rings in half an hour.

Saturn’s rings consists of countless separate particles with sizes ranging from pea-sized to that of giant boulders. These particles are composed mainly of water ice, with a trace of rocky material. There are two basic possibilities for how Saturn got its rings. It is conceivable that Saturn formed with the rings from the great cloud of gas and dust that also formed our sun and the other planets, 4 1/2 billion years ago. Or – as now seems more likely – the rings started out as moons for Saturn that collided, or a moon that came too close (within Saturn’s Roche limit) and was shattered by tidal forces.

We are lucky to be around to see Saturn’s ring system, which appears to be in the middle of its lifetime. However, if rings are temporary, perhaps we just missed out on seeing giant ring systems of Jupiter, Uranus and Neptune, which have only thin ringlets today!

Artist’s concept of how Saturn might look in the next hundred million years. According to this scenario, the innermost rings would disappear first as they rain onto the planet. They’d be followed more slowly by the outer rings. Image via NASA/Cassini/James O’Donoghue.

The first hints that a ring rain existed came from Voyager spacecraft observations in the early 1980s. Now, according to a statement from NASA:

Ring particles are caught in a balancing act between the pull of Saturn’s gravity, which wants to draw them back into the planet, and their orbital velocity, which wants to fling them outward into space. Tiny particles can get electrically charged by ultraviolet light from the sun or by plasma clouds emanating from micrometeoroid bombardment of the rings. When this happens, the particles can feel the pull of Saturn’s magnetic field, which curves inward toward the planet at Saturn’s rings. In some parts of the rings, once charged, the balance of forces on these tiny particles changes dramatically, and Saturn’s gravity pulls them in along the magnetic field lines into the upper atmosphere.

Once there, the icy ring particles vaporize and the water can react chemically with Saturn’s ionosphere. One outcome from these reactions is an increase in the lifespan of electrically charged particles called H3+ ions, which are made up of three protons and two electrons. When energized by sunlight, the H3+ ions glow in infrared light, which was observed by O’Donoghue’s team using special instruments attached to the Keck telescope in Mauna Kea, Hawaii.

Their observations revealed glowing bands in Saturn’s northern and southern hemispheres where the magnetic field lines that intersect the ring plane enter the planet. They analyzed the light to determine the amount of rain from the ring and its effects on Saturn’s ionosphere. They found that the amount of rain matches remarkably well with the astonishingly high values derived more than three decades earlier …

The team also found that one region in the south of Saturn was receiving most of ring rain.

And they discovered a glowing band at a higher latitude in Saturn’s southern hemisphere. This is where Saturn’s magnetic field intersects the orbit of the Saturn moon Enceladus, which was discovered by the Cassini spacecraft to be shooting geysers of water ice into space.

It’s been thought for some years that some of this material from Enceladus rains onto Saturn as well, and this new work confirms that moon rain exists as well. 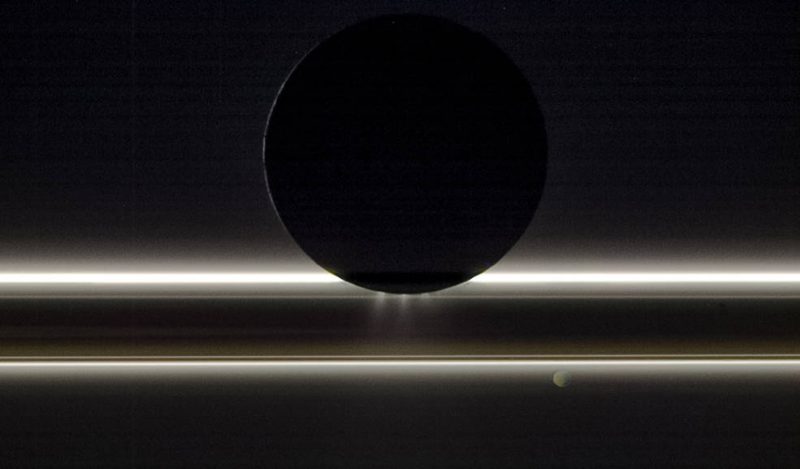 Saturn’s moon Enceladus drifts before the rings and the tiny moon Pandora in this view that NASA’s Cassini spacecraft captured on November 1, 2009. The entire scene is backlit by the sun, providing striking illumination for the icy particles that make up both the rings and the jets emanating from the south pole of Enceladus, which is about 314 miles (505 km) across. Pandora, which is about 52 miles (84 km) wide, was on the opposite side of the rings from Cassini and Enceladus when the image was taken. This view looks toward the night side on Pandora as well, which is lit by dim golden light reflected from Saturn. Image via NASA/JPL-Caltech/Space Science Institute.

Bottom line: New research confirms the idea that the iconic rings of the planet Saturn are only temporary. A ring rain is apparently falling onto Saturn, which, within some 100 to 300 million years, should cause the rings to disappear.

Source: Observations of the chemical and thermal response of ‘ring rain’ on Saturn’s ionosphere