Titan’s Nile is no dry riverbed. It appears to be filled with liquid, presumably ethane mixed with methane. 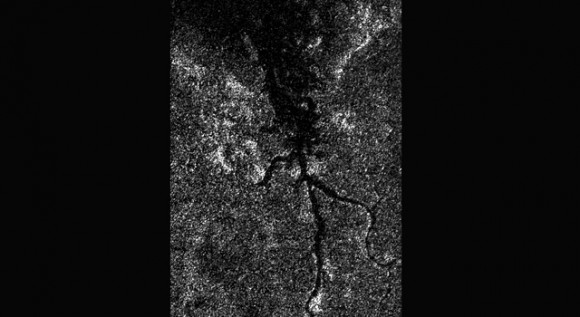 Scientists discover mini Nile on Titan. This image looks very much like the Nile River delta. And there’s even liquid flowing here … but it’s not water.

The image above and at right is from from NASA’s Cassini spacecraft, and it shows a river system on Saturn’s moon Titan reminiscent of Earth’s Nile River. NASA released the image earlier today (December 12, 2012).

And what a river it is! Alien, and yet familiar. We’ve never seen a river system so vast (and so clearly) anywhere other than Earth.

The Cassini spacecraft acquired images of Titan’s “Nile” on September 26, 2012. It was Cassini’s 87th close flyby of Titan since first beginning its exploration of the Saturn system in 2004.

What’s more, unlike the dry riverbeds seen on Mars, this river on Titan appears to be filled with liquid. Scientists think so, because it appears dark along its entire extent in the high-resolution radar image, indicating a smooth surface. It’s liquid … but not water.

Instead, the liquid in Titan’s “Nile” is presumably ethane mixed with methane. Cassini found liquid ethane on Titn in 2008, at the lake known as Ontario Lacus in Titan’s southern hemisphere. NASA said:

Though there are some short, local meanders, the relative straightness of the river valley suggests it follows the trace of at least one fault, similar to other large rivers running into the southern margin of Ligeia Mare. Such faults may lead to the opening of basins and perhaps to the formation of the giant seas themselves.

Bottom line: Today (December 12, 2012), NASA released a Cassini spacecraft image of what they’re calling a “mini Nile” on Saturn’s largest moon Titan. And this is no dry riverbed. It appears to be filled with liquid, presumably ethane mixed with methane.