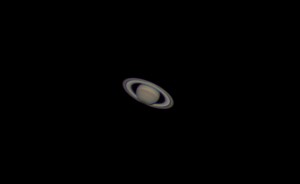 Saturn … taken (ironically) on Saturday which comes from the ancient Roman name “dies Saturni” or Saturn’s Day, honoring Saturn…the roman god of agriculture, after whom the planet was named.
The planet is relatively close to the horizon these days so the “seeing” isn’t optimum for photography but with our recent stretch of clear nights in the Puget Sound and no moon, Saturn was worth the attempt.
Equipment Details I took this with my Explore Scientific 127mm (5 inch) apo telescope. The optical train starts with a ZWO ASI 120mm monochrome webcam attached to an RGB color filter wheel which is attached to a Powermate 4x image amplifier attached to the telescope.
Post-processing Details The process I use involves taking 3 separate 1 minute .avi sequences, one each through the red, green and blue filters. I align and stack each sequence using Registax software which gives me three .bmp images…one red, one blue and one green. I take those images into photoshop and combine them back into a full color (RGB) image.

Thank you! Your submission has been received!
Oops! Something went wrong while submitting the form.
END_OF_DOCUMENT_TOKEN_TO_BE_REPLACED