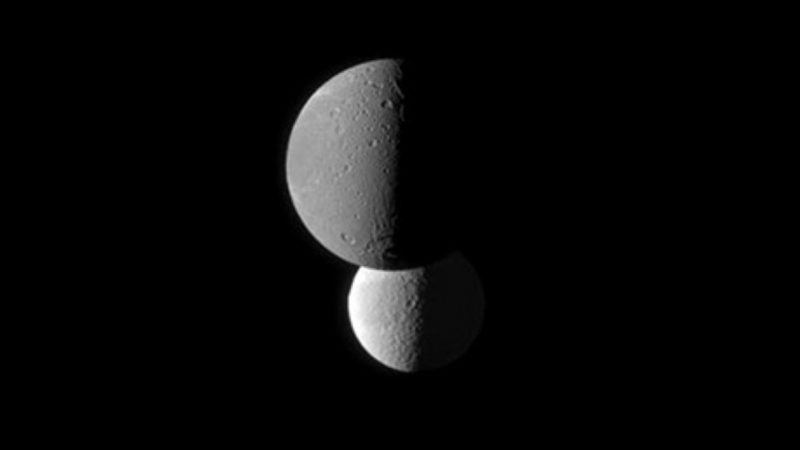 Scientists have been pondering the ages of Saturn’s moons and rings for some time. Some decades ago, it was assumed both the moons and the rings would be found to have formed with the rest of the solar system, 4.5 billion years ago. But more recent results – many based on Cassini spacecraft data – have suggested that the moons and rings are young, on the order of 100 million years (or less). On December 6, 2016, scientists in Europe and the U.S. said their analysis of data from the Cassini spacecraft mission to Saturn favors a young age for Saturn’s moons. Their result comes from a detailed analysis of Cassini data as it relates to Saturn’s core and gravitational forces. The analysis indicates that Saturn’s moons didn’t form at the same time as Saturn, Earth and the rest of the solar system because, if they had, their current distances from Saturn should be greater, these scientists say. The scientists’ statement said:

… this new research suggests, the moons are younger than 4.5 billion years, favoring a theory that the moons formed from Saturn’s rings.

The new result comes from the European-based Encelade science team (pronounced en-CELL-ad), led by Valéry Lainey of the Paris Observatory. This is the same team that, in 2012, released new information about Saturn’s rings, based on a study of the orbits of the moons. That earlier research suggested a young age for the rings.

The new research from the Encelade team provided a key measurements in the research related to the rigidity of the interior of Saturn, which is a gas giant planet. In addition, although most planetary moons, including Earth’s moon, move away from their parent planets, the team confirmed for the first time that Saturn’s moons move away from the planet at a faster rate than expected.

Both of these measurements – on Saturn’s rigidity and the rate at which the moons are moving away – indicate the younger ages for the moons, they say.

Their study is published in the January, 2017 issue of the peer-reviewed journal Icarus.

Read the details about this study from Cornell University

Bottom line: Scientists used Cassini data to show that Saturn’s moons are younger than earlier assumed. Previously, most astronomers would have thought Saturn’s moons were as old as Saturn, Earth and the rest of the solar system, 4.5 billion years old. The new result suggests they moon might have formed more recently, on the order of 100 million years, from Saturn’s rings.