Earth and Mars both are known to have swirling dust devils moving along their surfaces. Saturn’s large moon Titan might have them, too, according to a new study. If so, NASA’s planned Dragonfly mission will be able to find them. 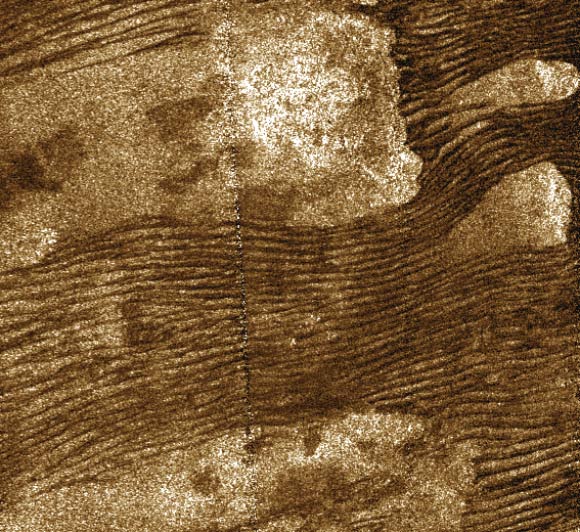 Titan has vast fields of sand dunes, similar to those on Earth and Mars. New research suggests that dust devils might play a role in their formation. Image via NASA/ JPL-Caltech/ Sci-News.com.

Dust devils – short-lived whirlwinds filled with dust grains – are common on Earth, and even on Mars, where various rovers and orbiters have observed them many times. Now there’s another world in the solar system where dust devils might roam, according to a new study from researchers at Boise State University in Idaho. It’s Saturn’s large moon, Titan! And NASA’s planned Dragonfly mission – a drone-like flying robot able to perform vertical-takeoffs and landings – will be able to find them.

The intriguing possibility of dust devils on Titan was the subject of a recent post in AGU Blogosphere by Liza Lester of the American Geophysical Union. The new peer-reviewed paper detailing the dust devil research was published in Geophysical Research Letters on March 3, 2020.

Saturn’s moon Titan may host active dust devils, small dust-laden plumes, which could significantly contribute to transport of dust in that moon’s atmosphere. Although the exact nature of dust on Titan is unclear, previous observations confirm that there is actively blowing dust on that world. If dust devils are active on Titan’s surface, NASA’s upcoming Dragonfly mission is likely to encounter them, but dust devils on Titan are unlikely to pose a hazard to the mission.

The arrival of NASA’s Dragonfly mission on Titan in 2034 presents the prospect of probing extraterrestrial vortices in a similar way to these field studies, although encounters will probably occur primarily while Dragonfly is on the ground. However, Titan’s relevant meteorological conditions suggest that vortex encounters, if in-flight, may occur a few times during Dragonfly’s daily flight. The low wind speeds expected for dust devils on Titan mean they will pose little to no hazard to the mission. However, Dragonfly will spend most of its time on the ground, including during Titan’s midday when vortices are most likely to be active, and so encounters will probably occur on the ground every few Earth hours instead. In this case, they will likely resemble encounters on Mars by landed spacecraft. Even then, though, the imagery and meteorological data collected by Dragonfly during encounters may break new ground in aeolian studies by showing how they operate in a new aerodynamic environment. 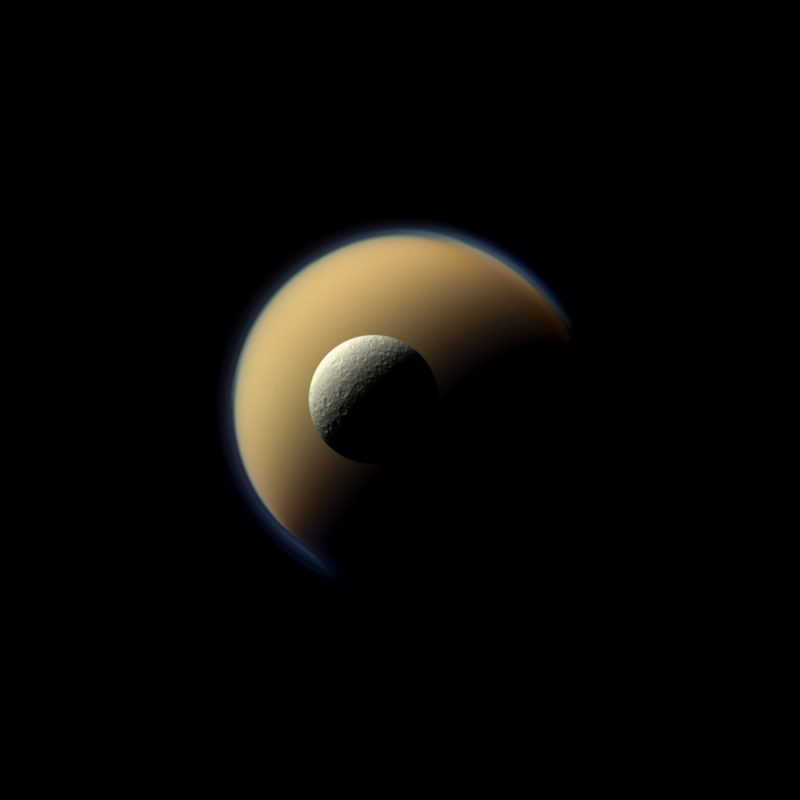 Titan with Mimas in the foreground, as seen by Cassini on June 16, 2011. Like Earth and Mars, a new study suggests that Titan has dust devils. Image via NASA/ JPL-Caltech/ Space Science Institute/ Sci-News.com.

It’s been known for some time now, thanks to the Cassini mission to Saturn and its moons, that Titan has vast expanses of sand dunes (composed of organic hydrocarbon particles, unlike Earth and Mars). Winds on Titan are typically rather weak, but the dune particles do get transported around, and dust devils might be an ideal mechanism for that to happen. As Brian Jackson, a planetary scientist at BSU, said in a statement:

Winds at the surface of Titan are usually very weak. Unless there is a big storm rolling through, there’s probably not that much wind, and so dust devils may be one of the main dust transport mechanisms on Titan, if they exist.

So far, dust devils haven’t actually been seen yet on Titan, but meteorological models, based on data from the Huygens probe which landed on Titan in 2005, suggest they should be possible. Jackson said:

When we plug the numbers in for how much dust the dust devil ought to lift based on the wind speeds we see, they seem to be able to lift more dust than we would expect. There may be some other mechanism which is helping them pull this dust, or the equations are just wrong. 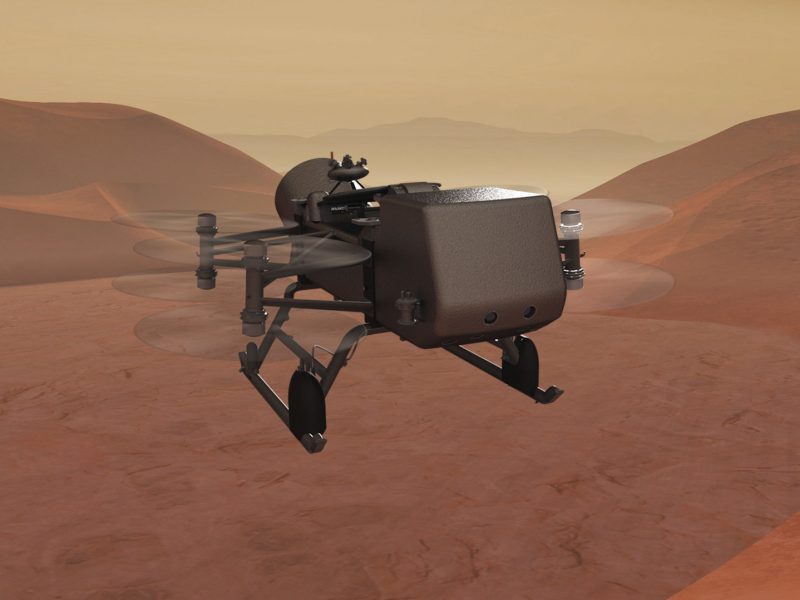 On Earth, dust devils are very common (I remember even being briefly caught in a small one when I was a kid). In order to get more insight into how earthly dust devils form, Jackson and his colleagues studied ones in southeastern Oregon’s Alvord Desert, using small airborne drones carrying meteorological instruments. Those findings can be compared with observations of dust devils on Mars. According to Jackson:

We can watch dust devils skitter across the surface of Mars and see what their internal structure is like, but that doesn’t tell us how much dust they are lifting. Mars’ atmosphere is really, really dusty and dust plays an important role in the climate. Dust devils are probably, if not the dominant mechanism, one of the most important mechanisms for lofting the dust.

Mars’ atmosphere is extremely thin, yet dust devils can still reach a height of 5 miles (8 km). This is especially true during the Martian summer. Mars is very dusty – dust is literally everywhere – and that dust can be carried all over the planet despite the thinness of the atmosphere. The planet even experiences periodic global dust storms.

So how does this apply to Titan?

Titan has a thick atmosphere. It’s even thicker than Earth’s. But it only has one-seventh the gravity of Earth. Because of this, winds on Titan tend to be a lot gentler than those on Earth or even Mars. Jackson said:

It’s just this enormous, puffy atmosphere. When you’ve got that much air it’s hard to get it churning. So you just don’t usually get big winds on the surface of Titan so far as we know.

Since, as far as we know, Titan doesn’t have raging wind storms, smaller dust devils might be a good way to transport the hydrocarbon particles and create the massive dune fields. In this way, Titan would be similar to Mars, even though there are such large differences in atmospheric density and composition, wind speed and sand composition between the two worlds.

It will be a while before we can learn more about dust devils on Titan, and whether they even do actually exist. Dragonfly doesn’t launch until 2026, and won’t arrive at Titan until 2034. The Cassini mission, which ended in 2017, was the most recent to visit Saturn and its moons, with no other missions upcoming until Dragonfly. 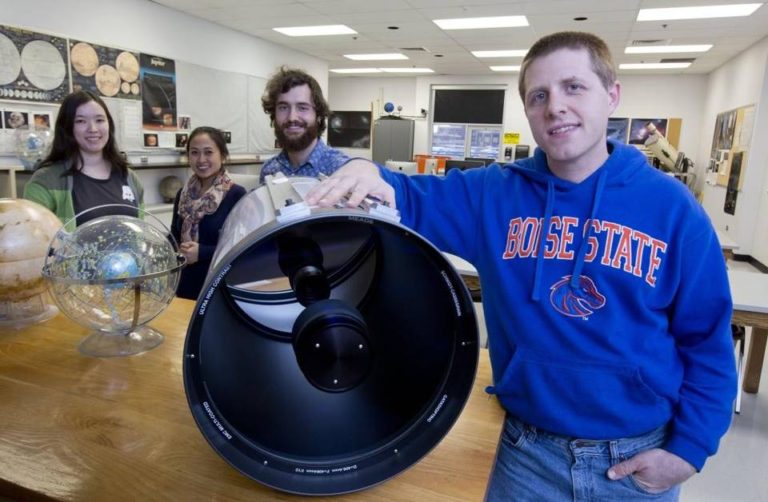 If Dragonfly does find dust devils, it will be fascinating to compare them to the ones on Earth and Mars. This is especially true since Titan is remarkably similar to Earth in some ways, with its rain, rivers, lakes and seas, albeit composed of liquid methane and ethane instead of water. Combined with the sand dunes, you could almost mistake the landscape seen in images sent back as being on Earth, if it weren’t for the smoggy-looking orange-ish sky. Dust devils would add to that already somewhat eerie – yet oddly reminiscent – alien landscape.

Bottom line: Titan may have dust devils like Earth and Mars, a new study says.