Saturn kisses the dark edge of the moon

Astrophotographer Colin Legg in Western Australia caught the August 4, 2014 occultation of Saturn by the moon. He called it “a brilliant thing to watch.” 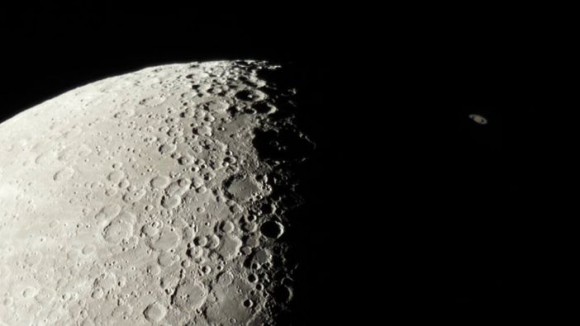 In 2014, the ringed planet Saturn and Earth’s moon are in a cycle of 13 occultations – events during which the moon covers Saturn – that advance from Antarctica through the Northern Hemisphere over the year. Colin Legg in Western Australia caught the August 4, 2014 event: the dark edge of the moon moved in front of Saturn and blotted it temporarily from view. Astronomers call this event an occultation. Colin wrote:

This pic marks C1, the moment Saturn’s disk touches the dark limb of the moon. The rings are already partially obscured. A brilliant thing to watch.

I’m a little sad tonight. Our amazing stretch of four moon/Saturn occultations is over for the year. We had perfect conditions in Western Australia last night for the final installment. Moon was half full and Saturn entered the dark side an hour after sunset. Even naked eye the view was stunning. I could see Saturn hugging the moon up a minute before disappearing.

The view through my C8 telescope as Saturn’s disk kissed the dark edge of the moon. Video frame grab.

Will a Saturn occultation be visible from North America? The August 4, 2014 occultation was not. The Observer’s Handbook of the Royal Astronomical Society of Canada says:

The only occultation from a populated area of North America crosses the eastern U.S. and southeastern Canada, taking place (in daytime) on August 31.