New findings suggest that Saturn’s rings formed only 10 to 100 million years ago, during the earthly age of the dinosaurs. 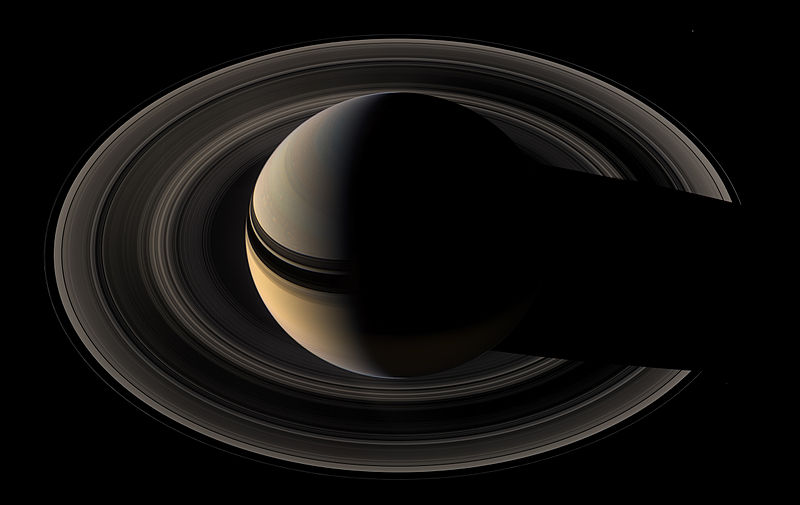 The Cassini spacecraft acquired the images to make this natural color mosaic on May 9, 2007, as it soared above the shaded side of Saturn’s rings. Image via NASA PhotoJournal.

A new analysis of gravity science data from the Cassini spacecraft’s last ultra-close flybys of Saturn in 2017 suggests the planet’s iconic rings are only 10 to 100 million years old. From our planet’s perspective, that means Saturn’s rings may have formed during the age of the dinosaurs.

The findings, published January 17, 2019, in the peer-reviewed journal Science, support the hypothesis that the rings are rubble from a comet or Kuiper Belt object captured late in Saturn’s history.

Last month we reported on new research confirming that Saturn will lose its rings in about 300 million years, or even sooner. Saturn formed 4.5 billion years ago, in the early years of our solar system. The new research says Saturn was ringless for most of its history and the ring system is a young upstart that attached to Saturn much later. 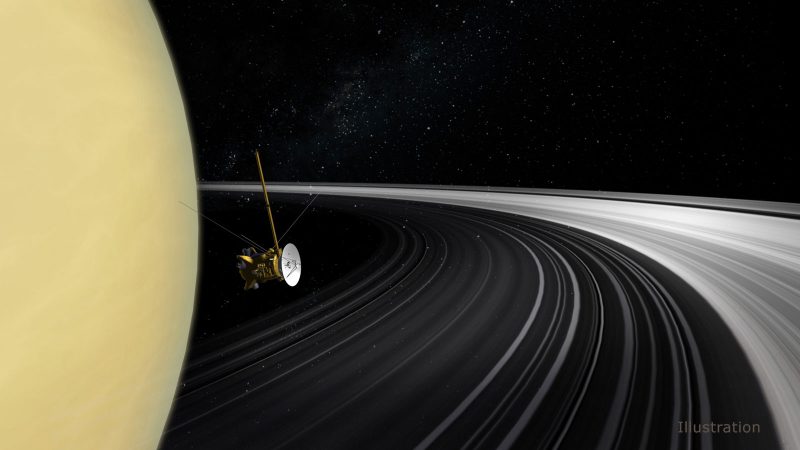 Artist’s concept of the Cassini orbiter crossing Saturn’s ring plane. New measurements of the rings’ mass give scientists the best answer yet to the question of their age. Image via NASA/JPL-Caltech.

One of the last acts of NASA’s Cassini spacecraft before its 2017 death plunge into Saturn’s hydrogen and helium atmosphere was to coast between the planet and its rings and let them tug it around, essentially acting as a gravity probe. Precise measurements of Cassini’s final trajectory have now allowed scientists to make the first accurate estimate of the amount of material in the planet’s rings, weighing them based on the strength of their gravitational pull.

Once scientists knew how much gravity was pulling on Cassini, causing it to accelerate – down to a fraction of a millimeter per second – they could determine how massive the planet is and how massive the rings are.

Only by getting so close to Saturn in Cassini’s final orbits were we able to gather the measurements to make the new discoveries.

Their estimate — about 40 percent of the mass of Saturn’s moon Mimas, which itself is 2,000 times smaller than Earth’s moon — tells them that the rings are relatively recent, having originated less than 100 million years ago and perhaps as recently as 10 million years ago.

According to a statement from University of California Berkeley about the findings:

[The rings’] young age puts to rest a long-running argument among planetary scientists. Some thought that the rings formed along with the planet 4.5 billion years ago from icy debris remaining in orbit after the formation of the solar system. Others thought the rings were very young and that Saturn had, at some point, captured an object from the Kuiper belt or a comet and gradually reduced it to orbiting rubble.

Read more here about how the astronomers did the calculations to figure out the age of the rings.

The new calculation builds on a connection scientists previously made between the mass of the rings and their age. Lower mass points to a younger age, because the rings, which are bright and mostly made of ice, would have been contaminated and darkened by interplanetary debris over a longer period. With a better calculation of ring mass, scientists were better able to estimate the rings’ age.

The study authors say that the new evidence of young rings lends credence to theories that they formed from a comet that wandered too close and was torn apart by Saturn’s gravity – or by an event that broke up an earlier generation of icy moons.

Cassini’s mission ended in September 2017, when it was low on fuel and deliberately plunged into Saturn’s atmosphere to protect the planet’s moons.

Bottom line: A new study using data from the Cassini spacecraft’s 2017 flybys of Saturn suggests the planet’s iconic rings are only 10 to 100 million years old.