A Russian Soyuz rocket launched an unpiloted Progress resupply vehicle Tuesday morning – April 28, 2015 – for what was supposed to be a fast rendezvous trip to the International Space Station (ISS). However, numerous problems have resulted in what may be a lost vehicle, after the craft was seen spinning wildly on orbit.

Russian space agency officials have called off plans to try to dock Progress 59 at the space station on Thursday. NASA spokesman Rob Navias said in a NASA TV update that the docking — which had been scheduled for Thursday — is now “indefinitely postponed.”

The Russian Progress vehicles are part of a fleet of robotic spacecraft designed deliver supplies to ISS. Other craft used for this purpose include those from Japan and Europe, as well as commercial spacecraft built by the U.S. companies SpaceX and Orbital Sciences Corp.

The most recent cargo ship to visit the space station was the unmanned SpaceX Dragon capsule, which launched on April 14 and arrived at the orbiting lab on April 17.

You might find updates on the out-of-control Progress resupply ship, here 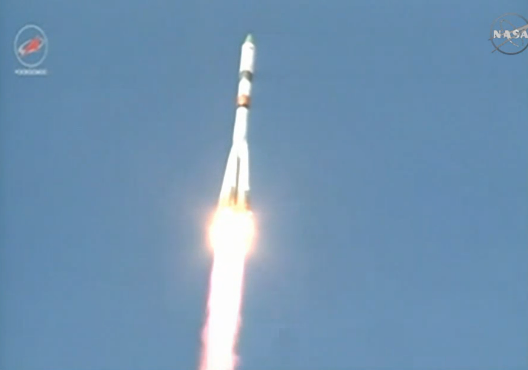 The unpiloted ISS Progress 59 cargo craft (M-27M) launched at 3:09 a.m. EDT (7:09 UTC, 1:09 p.m. local time in Baikonur) from the Baikonur Cosmodrome in Kazakhstan. At the time of launch, the International Space Station was flying about 257 miles over northeast Kazakhstan near the Russian border, having flown over the launch site two-and-a-half minutes before liftoff.

Less than 10 minutes after launch, the resupply ship reached preliminary orbit and deployed its solar arrays and navigational antennas, but ground controllers noticed the spinning shortly after that.

Progress was originally planned to make a four-orbit, six-hour journey to ISS; however, after telemetry could not confirm the Kurs automated rendezvous antennas was deployed, that schedule was changed to a two-day, 34-orbit rendezvous to the station.

Now the rendezvous is postponed indefinitely.