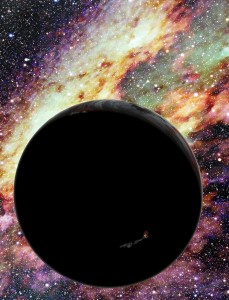 In this artist’s conception, a runaway planet zooms through interstellar space. New research suggests that the supermassive black hole at our galaxy’s center can fling planets outward at relativistic speeds. Eventually, such worlds will escape the Milky Way and travel through the lonely intergalactic void. In this illustration, a glowing volcano on the planet’s surface hints at active plate tectonics that may keep the planet warm.

Thank you! Your submission has been received!
Oops! Something went wrong while submitting the form.
END_OF_DOCUMENT_TOKEN_TO_BE_REPLACED