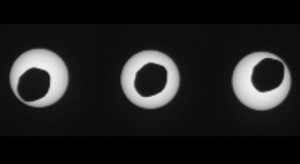 This set of three images shows views three seconds apart as the larger of Mars’ two moons, Phobos, passed directly in front of the sun as seen by NASA’s Mars rover Curiosity. Curiosity photographed this annular, or ring, eclipse with the telephoto-lens camera of the rover’s Mast Camera pair (right Mastcam) on Aug. 17, 2013, the 369th Martian day, or sol, of Curiosity’s work on Mars.

Thank you! Your submission has been received!
Oops! Something went wrong while submitting the form.
END_OF_DOCUMENT_TOKEN_TO_BE_REPLACED