Seasons are changing on Rosetta’s comet

Two photos from the Rosetta spacecraft – one from last November, and one from a few days ago – show a comet’s seasons changing. 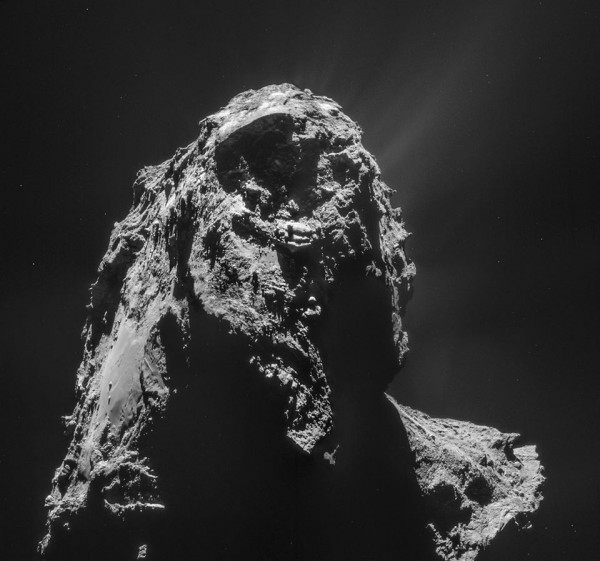 View larger. | Rosetta obtained this image of its comet on January 16, 2015. Contrast it to the image below, and you’ll see how the “seasons” are changing on the comet. This mosaic covers 4.5 by 4.2 kilometers (2.8 by 2.6 miles). Image via ESA NAVCAM Rosetta.

While its Philae Lander continues to ‘sleep,’ waiting for the sun to rise high enough in its sky for its solar panels to begin generating power again, the Rosetta spacecraft continues its science mission at Comet 67P/Churyumov–Gerasimenko. The image above is an amazing four-frame mosaic from Rosetta’s Navigation Camera (NAVCAM), taken on January 16, 2015 from a distance of 28.4 km (17.6 miles). The orientation of the Rosetta Spacecraft and time of day on the comet is identical to the images obtained back on November 2, 2014 (see below), but note how many of the shadowed areas back in November are now starting to get some oblique sunlight, as the comet continues towards an equinox (its northern autumn/southern spring), coming up on May 5, 2015. 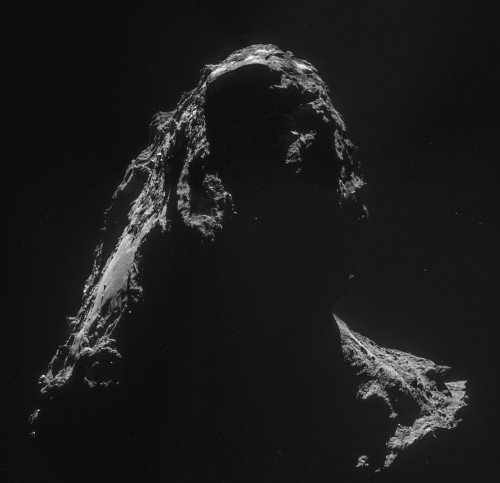 View larger. | Rosetta obtained this image of its comet on November 2, 2014. Image via ESA NAVCAM Rosetta.

In the top image, the smooth area scientists have dubbed Imhotep is visible on the left side. The large pyramid-shaped boulder dubbed Cheops is also on the left, seen obliquely.

The nucleus of 67P/Churyumov–Gerasimenko is smaller than many mountains. It’s also much smaller than both of the Mars moons, Phobos and Deimos.

Many features look like ablation features, that is, features made as ice vaporizes from the comet’s surface. That’s so even though Comet 67P/Churyumov-Gerasimenko has only been in an orbit to allow sublimation only very recently. These features might be impact features that have frozen. Cliffs and boulders on the comet are also visible.

Bottom line: Two photos from the Rosetta spacecraft’s NAVCAM – one from last November, and one from a few days ago (January 16, 2015) – show the change in seasons on Comet 67P/Churyumov-Gerasimenko.