Rosetta’s comet reappears from behind the sun

It’s back! The target comet of ESA’s Rosetta mission disappeared behind the sun and out of the Earth’s view last October. Comet 67P/Churyumov-Gerasimenko can now be seen again. 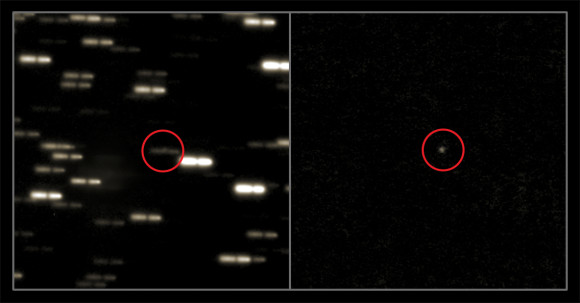 Comet 67P/Churyumov-Gerasimenko as observed on February 28th, 2014, with the Very Large Telescope.
Left: In order to make the comet visible, the scientists superposed several exposures. The images were shifted to compensate for the comet’s motion. The stars appear as broadly smudged lines. Right: Subtracting the starry background reveals the comet. Image credit: MPS/ESO

Rosetta is on a 10-year mission to study Comet 67P/Churyumov-Gerasimenko up close as the comet enters the solar system. The spacecraft woke up from hibernation in January and will rendezvous with the comet in May and enter orbit around it in August. If all goes well, it will be the first spacecraft to orbit a comet’s nucleus and the first lander to do a controlled touchdown, in November, on the surface of a comet. The comet is just a few kilometers across.

In the more recent image, above, obtained by ESO’s Very Large Telescopenin Chile on February 28 – the first since the comet disappeared behind the sun last October – the comet presents itself brighter than expected.

For researchers, the tiny dot in the image carries valuable information. Already 67P/Churyumov-Gerasimenko is approximately 50 percent brighter than in the last images from October 2013. While the comet has moved another 50 million kilometers closer to Earth in this time (and 80 million kilometers closer to the sun), the increase in brightness cannot be explained by the smaller distance alone.

The Rosetta spacecraft was launched from the Guiana Space Centre in French Guiana in March, 2004. The spacecraft was placed in a hibernation mode in June, 2011, and woke up in January, 2014.