“We found a mechanism that replenishes the surface of the comet with fresh ice at every rotation. This keeps the comet ‘alive’,” said a researcher. 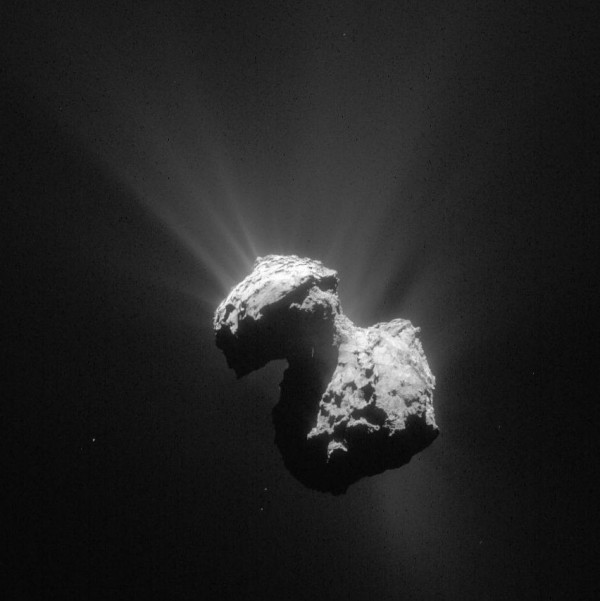 Scientists studying data from the Rosetta spacecraft – which has been orbiting Comet 67P/Churyumov–Gerasimenko since August, 2014 – have identified a region on the comet’s surface where water ice appears and disappears in sync with the comet’s day, or rotation period. They reported their findings on September 23, 2015 in the journal Nature.

Fabrizio Capaccioni, who is principal investigator for a key instrument on Rosetta called the Visible, InfraRed and Thermal Imaging Spectrometer (VIRTIS), said in a statement:

We suspected such a water-ice cycle might be at play at comets, on the basis of theoretical models and previous observations of other comets. But now, thanks to Rosetta’s extensive monitoring at 67P/Churyumov–Gerasimenko, we finally have observational proof.

Maria Cristina De Sanctis, lead author of the study, said they now understand the mechanism that:

… replenishes the surface of the comet with fresh ice at every rotation: this keeps the comet ‘alive.’

The team studied VIRTIS data taken in September 2014, shortly after Rosetta began orbiting the comet and nearly a year away from 67P’s August, 2015 perihelion, or closest point to the sun. They concentrated on a one square-kilometer region on the comet’s “neck” (the narrow part of the comet, between the two larger lobes).

At the time, the comet was about 300 million miles (500 million km) from the sun, and the neck was one of the most active areas.

Comets, of course, have a day-night cycle, just as Earth does and just as all bodies in our solar system do. Each part of Comet 67P has a period of daylight, when that section of the comet is illuminated by our sun, followed by nighttime, when that part of the comet has spun away from the view of the sun in space and now lies in the comet’s own shadow. Comet 67P/Churyumov–Gerasimenko takes just over 12 hours to complete one full spin, so that is the length of its day-night cycle (in contrast to 24 hours for a full spin of Earth).

We saw the tell-tale signature of water ice in the spectra of the study region but only when certain portions were cast in shadow.

Conversely, when the sun was shining on these regions, the ice was gone. This indicates a cyclical behavior of water ice during each comet rotation.

The data suggest that water ice on, and a few centimeters below, the surface sublimates – changes from a solid directly to a gas – when illuminated by sunlight. According to the statement:

The gas then flows away from the comet. Then, as the comet rotates and the same region falls into darkness, the surface rapidly cools again.

However, the underlying layers remain warm owing to the sunlight they received in the previous hours, and, as a result, subsurface water ice keeps sublimating and finding its way to the surface through the comet’s porous interior.

But as soon as this ‘underground’ water vapour reaches the cold surface, it freezes again, blanketing that patch of comet surface with a thin layer of fresh ice.

Eventually, as the sun rises again over this part of the surface on the next comet day, the molecules in the newly formed ice layer are the first to sublimate and flow away from the comet, restarting the cycle.

The scientists said are now busy analyzing data collected via the Rosetta spacecraft over the past year, during which time the comet’s activity steadily increased as the comet drew closer to the sun.

Comet 67P/Churyumov–Gerasimenko swept closest to the sun in its 6.5 year orbit about a month ago, on August 13, 2015. The Rosetta spacecraft is still orbiting it, still sending back data, as the comet now moves back towards the outer solar system. 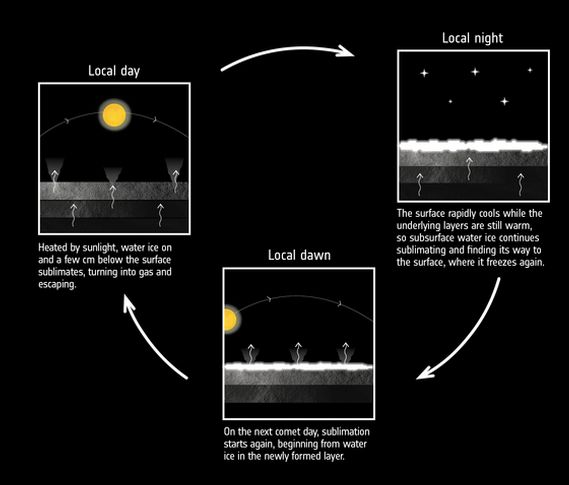 Bottom line: Scientists studying data from the Rosetta spacecraft have identified a region on the comet’s surface where water ice appears and disappears in sync with the comet’s day, or rotation period.