Rosetta spacecraft glimpses its own shadow

It’s a spacecraft shadow on a comet! Rosetta caught its own shadow encircled in a wreath of light, on the icy surface of Comet 67P/Churyumov-Gerasimenko. 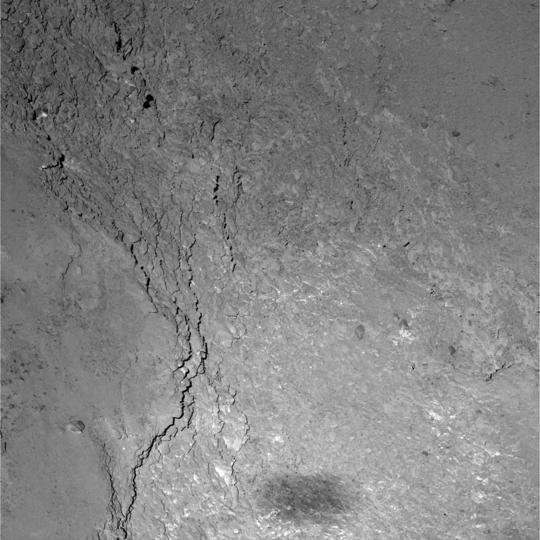 The dark spot at the bottom of the frame is the Rosetta spacecraft’s shadow on Comet 67P/Churyumov-Gerasimenko, which it has been orbiting since last August. The spacecraft was only 4 miles (6 km) from the comet when this image was acquired on February 14, 2015. Image via ESA/Rosetta/MPS for OSIRIS Team MPS/UPD/LAM/IAA/SSO/INTA/UPM/DASP/IDA

On February 14, 2015, the Rosetta spacecraft made a close flyby of Comet 67P/Churyumov-Gerasimenko. The spacecraft not only passed closer to a comet than any spacecraft had before, but it also became part of a unique space geometry. For a short time during the maneuver – as the spacecraft swept in closest to 67P – the sun, the spacecraft and the comet were almost perfectly aligned. Thus – although the resulting images are of high scientific value – they don’t appear as dramatic as some earlier Rosetta images of the comet, because few shadows can be seen. But there is one exception: as a side-effect of this exceptional geometry, we can see Rosetta’s shadow on the surface of the comet, surrounded by a bright halo-like region.

The images were acquired by OSIRIS, the scientific imaging system on board the Rosetta spacecraft. They have a resolution of 11 centimeters per pixel. 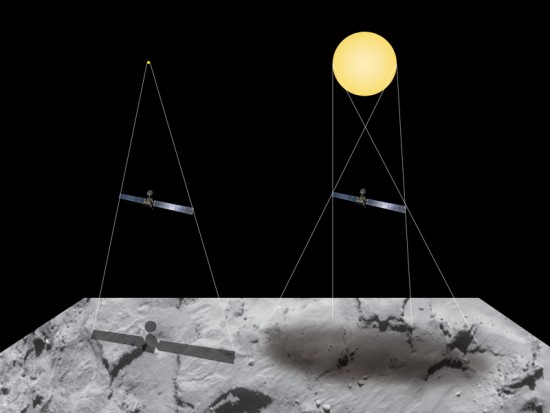 The shadow seen on the comet’s surface is Rosetta’s penumbra. Such penumbras occur when an object is illuminated by an extended light source like the sun. Image via ESA

Bottom line: The Rosetta spacecrft caught its own shadow encircled in a wreath of light, on the icy surface of Comet 67P/Churyumov-Gerasimenko, on February 14, 2015.