The Rosetta team is hoping that a software patch will help re-establish reliable contact with the little Philae lander, lodged somewhere on the comet’s surface. 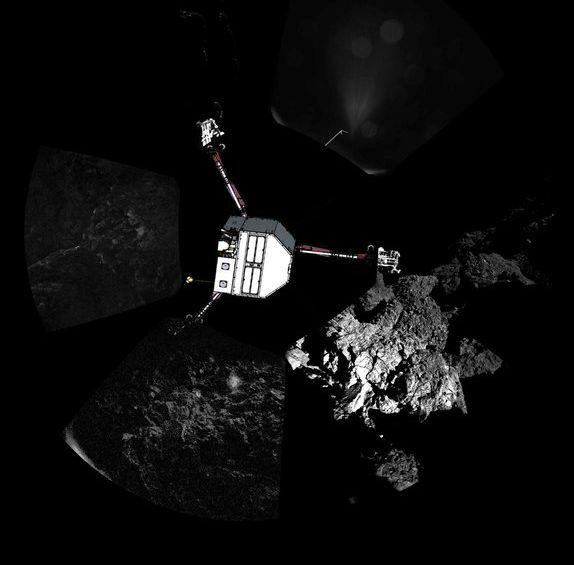 360º view around the point of Philae’s final touchdown. The three feet of Philae’s landing gear can be seen in some of the frames. Superimposed on top of the image is a sketch of the Philae lander in the configuration the lander team believed it was in November 2014. Image credit: ESA/Rosetta/Philae/CIVA

Europe’s Rosetta team have been continuing efforts to re-establish reliable contact with little lander Philae, lodged in an unidentified spot on Comet 67P/Churyumov-Gerasimenko.

Communications have been frustratingly intermittent, and the last signal the Rosetta mothership received from the surface was on July 9. Engineers at the Lander Control Center at the German Aerospace Center (DLR) in Cologne suspect that one of Philae’s two transmitters is not working properly, and one of its two receivers is damaged too.

In the latest bid to improve the situation, a software patch was uploaded from Earth to the Rosetta spacecraft last week, to command Philae to work with one transmitter only, and this has now been sent from Rosetta to the lander. The team is hopeful that Philae will have received its new instructions, since it can pick up and accept commands “in the blind”, and so it should obey them when it is next charged with sunlight.

The patch is not the lander team’s last throw of the dice, however. Commands are also being prepared and tested that aim to get Philae carrying out its science operations once again. The lander’s team wants to activate a command block that is still stored in Philae’s onboard computer, having been performed successfully following its dramatic landing on November 12, 2014. If switched back on, that should allow Philae to run its pre-programmed activities again, via instruments MUPUS, ROMAP, SESAME, PTOLEMY and COSAC, without involving any moving mechanism on the lander. The data collected would then be sent back to Earth via Rosetta, providing a reliable link could be established. 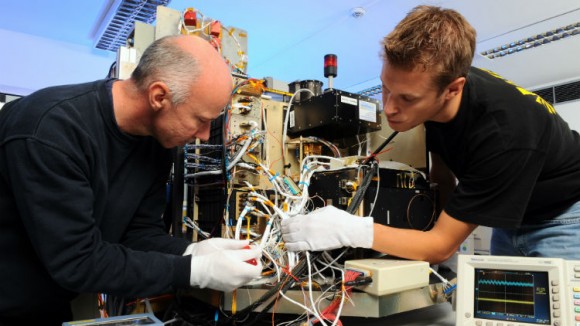 Two members of the lander team in Cologne work with a ground reference model of Philae to try to help solve the communications problem. Image credit: DLR

The patch is part of a strategy to overcome the issue of having infrequent and short lived communications coupled with the way in which the lander has been behaving. The key thing is that we have not had the lander in a science operable situation up to now, so the lander team is looking at modifying things onboard the lander to try to enable operations, given the non-nominal situation we are in.

The last information received from Philae on July 9, following a successful second attempt to contact the landed via the separate antenna on its CONSERT instrument, gave the lander team some information to help it to understand Philae’s current situation. Emily Baldwin, of Rosetta’s communications team, reports in today’s Rosetta blog that the data suggests Philae may have shifted position slightly, altering the orientation of its antenna.

A clue to this came from data revealing how much sunlight was falling on each of the lander’s solar panels. Philae’s project manager, Stephan Ulamec of the German Aerospace Center (DLR), tells the blog:

The profile of how strongly the sun is falling on which panels has changed from June to July, and this does not seem to be explained by the course of the seasons on the comet alone.

If Philae has moved, this could have been caused by a jet of gas from within the comet as it gets warmer and ever more active in the approach to perihelion, its closest point to the sun. It was already clearly sitting on uneven terrain, as was evident from the panoramic image it took of its surroundings after landing.

The Rosetta team has been facing another problem in getting the spacecraft and lander communicating again. Rosetta has been flying closer to the comet in recent weeks, around the boundary of its day and night side (the terminator), seeking the best location from which it can link up. This has taken the mothership to distances ranging from 180 to 153 km (112 to 95 miles) from the comet’s surface.

However, with a more dusty environment so close in, Rosetta’s star trackers, used for navigation, became confused again on the weekend on July 10-11 when they found it difficult to tell the difference between comet particles reflecting sunlight and the stars. The Rosetta blog reports that Rosetta was therefore being moved back to distances of between 170 and 190 km (105 to 118 miles), to keep it safe.

The perils facing Rosetta are clear in this photo of material jetting from the comet on July 7, 2015. Image credit: ESA/Rosetta/NAVCAM – CC BY-SA IGO 3.0 –