One of Rosetta’s final reports was of a large object in its field of view: the comet’s horizon as the spacecraft was about to strike the comet. 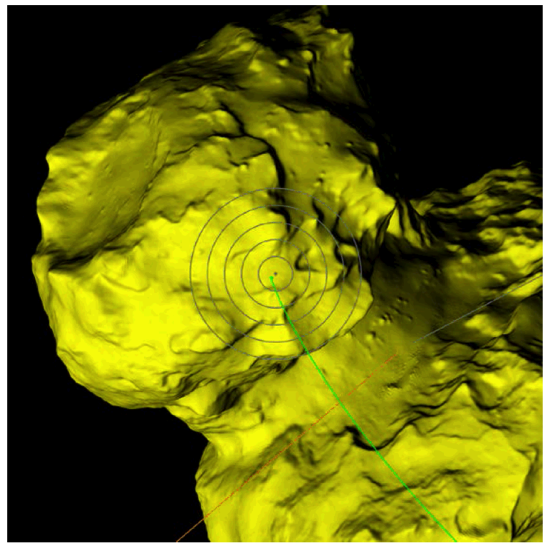 Rosetta touched down just 36 yards (33 meters) from its target point on its comet, as indicated by the green descent trajectory line. Image via ESA’s Rosetta Blog.

ESA released images and information on December 14 and 15, 2016 about what space scientists have been calling the Rosetta spacecraft’s last words. The craft was launched from Earth in 2004 and took a decade to reach its target comet, 67P/Churyumov–Gerasimenko. It went into orbit around the comet on August 6, 2014 and followed it for more than two years as the comet came closest to the sun in August 2015, then began heading to the far part of its orbit again. On September 30, 2016, mission scientists sent Rosetta into the comet’s surface in what they called a controlled impact. This week, they said one of the final pieces of information received from Rosetta was sent by its navigation startrackers: a report of a large object in the field of view. That would have been the comet’s horizon as Rosetta was about to strike.

Rosetta’s signal disappeared from screens at ESA’s mission control at 11:19:37 GMT on September 30, confirming that the craft had collided with the comet’s surface – and switched off – some 40 minutes earlier and 447 million miles (720 million km) from Earth.

Its great distance from Earth was one reason it was decided to close out the mission with a controlled impact, by the way. The comet is heading out towards the orbit of Jupiter, and, as a result, Rosetta was receiving less sunlight. The solar power needed to operate the craft and its instruments was waning, and there had been a reduction in the bandwidth available to downlink scientific data back to ESA. There were some other reasons for the controlled impact as well, which you can read about here … or hear about in the video at the bottom of this post. 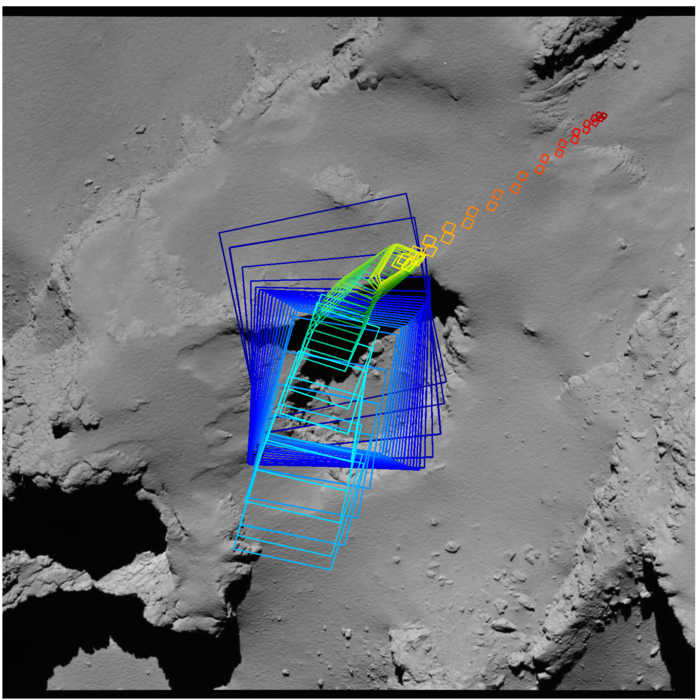 A final imaging sequence from Rosetta. The squares represent imaging ‘footprints’ of Rosetta’s OSIRIS camera during the descent to the comet’s surface. A primary focus was the pit named Deir el-Medina, as indicated by the number of footprints indicated in blue. The trail of orange and red squares reflect the change in pointing of the camera towards the impact site, subsequently named Sais. Image via ESA.

ESA said in a December 15 statement:

Reconstruction of the final descent showed that the spacecraft gently struck the surface only 33 meters [36 yards] from the target point.

The accuracy once again highlighted the excellent work of the flight dynamics specialists who supported the entire mission.

The spot, just inside an ancient pit in the Ma’at region on the comet’s ‘head’, was named Sais, after a town where the Rosetta Stone was originally located. 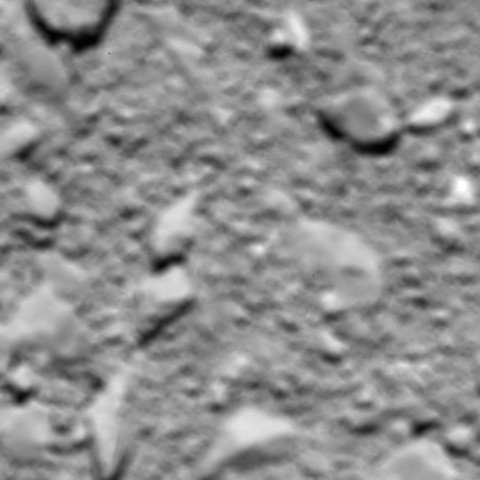 Rosetta’s last image of Comet 67P/Churyumov-Gerasimenko, taken with the OSIRIS wide-angle camera shortly before impact, at an estimated altitude of about 65 feet (20 meters) above the surface. The image measures about 38 inches (96 cm) across. Image via ESA.

If you’re interested in some of the non-technical details of what happened (or was expected to happen) during Rosetta’s controlled impact, try the video below from StarTalk, hosted by Natalie Starkey and comedian Chuck Nice. They recorded it on September 28, 2016, just two days before the craft was sent crashing (in a controlled way!) into the comet’s surface. On the video, Rosetta mission project scientist Matt Taylor explains the challenges of learning as much as possible during the impact. Also, there’s more about the challenge with putting Rosetta in orbit around a comet, and what the comet might smell like.

Bottom line: The Rosetta spacecraft made a controlled impact into its comet on September 30, 2016. One of its final reports was of a large object in the field of view: the comet’s horizon as Rosetta was about to strike.