This free-floating rogue planet – untethered to any star – has a magnetic field millions of times more powerful than Earth’s and auroras much more brilliant than our world’s northern lights. 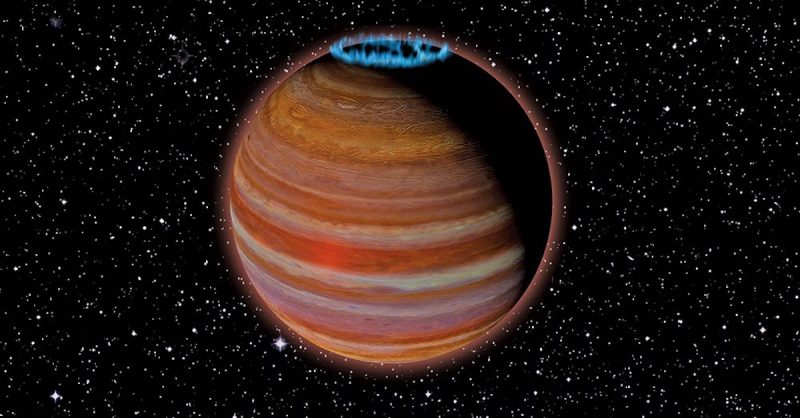 Rogue planets are free-floating worlds, drifting in space between the stars. A growing number of these odd objects have been discovered in recent years, not gravitationally tethered to any star. Now, a weird new one has been found and observed more closely, as discussed in a new peer-reviewed paper in The Astrophysical Journal on July 31, 2018. This world may be unbound to a star, but it is still energetic, with a powerful magnetic field four million times stronger than Earth’s and auroras more powerful than Earth’s northern lights.

Named SIMP J01365663+0933473 by earthly astronomers, this newly-discovered rogue planet is only 20 light-years from Earth, quite close by, astronomically speaking. Astronomers discovered it using the National Science Foundation’s Karl G. Jansky Very Large Array (VLA). They say it’s the first radio observation of a planetary-mass object beyond our solar system and the first time scientists have measured the magnetic field of one of these isolated planets. 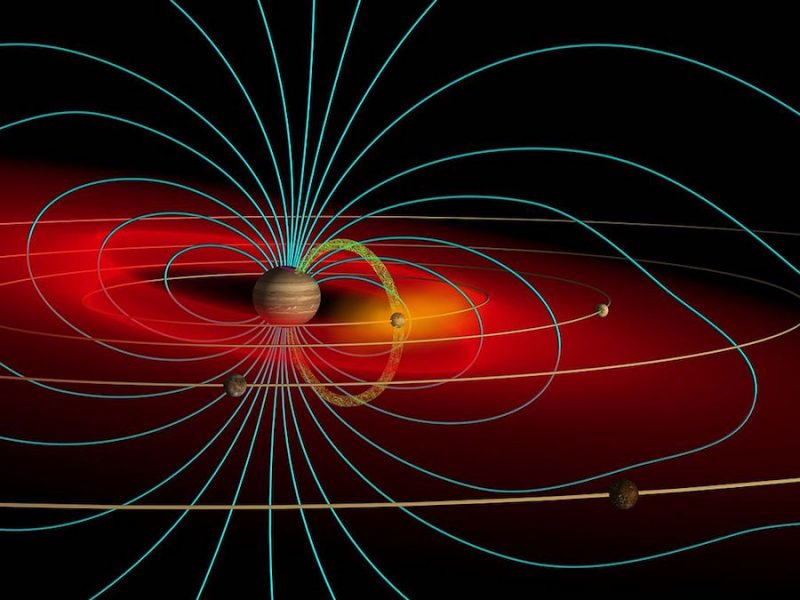 Illustration of the magnetic field around Jupiter. The magnetic field of SIMP J01365663+0933473 is thought to behave in a similar way, but is 20,000 times more powerful. Image via Yned/Wikimedia Commons.

SIMP J01365663+0933473 was first observed in 2016, but the newest observations were needed to reveal its bizarre nature. It was thought at first to be a brown dwarf – on object smaller than a star but larger than a planet – but additional observations indicated that it’s just small enough to be called a planet, albeit still huge – 12.7 times the mass and 1.2 times the radius of Jupiter. It is also very hot – over 1,500 degrees Fahrenheit (825 Celsius) on its surface. According to Melodie Kao at Arizona State University, who led the new study:

This object is right at the boundary between a planet and a brown dwarf, or ‘failed star,’ and is giving us some surprises that can potentially help us understand magnetic processes on both stars and planets.

Perhaps the most surprising thing about SIMP J01365663+0933473 is its powerful magnetic field, some four million times stronger than Earth’s. By comparison, Jupiter’s magnetic field, the strongest in the solar system, is 20,000 times more powerful than Earth’s. As might be expected, the magnetic field on the rogue planet also produces stunning auroras. The researchers involved think that this rogue world’s auroras might be more similar to Jupiter’s than Earth’s however; SIMP J01365663+0933473 does not have a star bombarding it with solar wind particles like Earth does, so the theory is that this unbound world might have its own moon. Jupiter’s auroras are produced not primarily by the sun, as Earth’s are, but primarily by charged particles coming from its volcanically active moon Io. As Kao noted:

This particular object is exciting because studying its magnetic dynamo mechanisms can give us new insights on how the same type of mechanisms can operate in extrasolar planets. We think these mechanisms can work not only in brown dwarfs, but also in both gas giant and terrestrial planets. 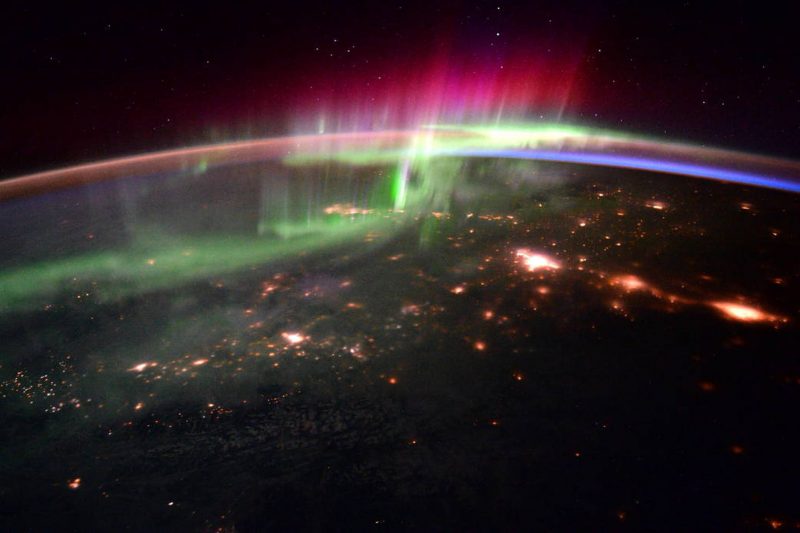 The northern lights (auroras) on Earth as seen from orbit. SIMP J01365663+0933473 has similar auroral displays, but they are much more intense. Image via NASA/ESA.

The new findings about this rogue planet will help astronomers learn more about planetary magnetic fields, exoplanetary ones in particular, but also provide another way of finding exoplanets. As co-author Gregg Hallinan of Caltech said:

Detecting SIMP J01365663+0933473 with the VLA through its auroral radio emission also means that we may have a new way of detecting exoplanets, including the elusive rogue ones not orbiting a parent star.

It’s now estimated that there might be one Jupiter-mass rogue planet for every four stars in our galaxy – an incredible number, although a bit smaller than previously thought. According to Przemek Mróz, an astronomer at the University of Warsaw Observatory in Poland:

Our new microlensing observations are in agreement with theoretical expectations on the frequency of free-floating Jupiters, and with infrared surveys for planetary-mass objects in star-forming regions. We found that Jupiter-mass planets are at least 10 times less frequent than previously thought.

One previous estimate, published in a Nature paper in 2011, was that there could be twice as many rogue planets as stars. So far, 17 known or suspected rogue planets have been discovered. Even though rogue planets have no stars from which to receive heat, they could still retain thick hydrogen and helium atmospheres that could trap heat left over from their formation. They could also remain geologically active for long periods of time. 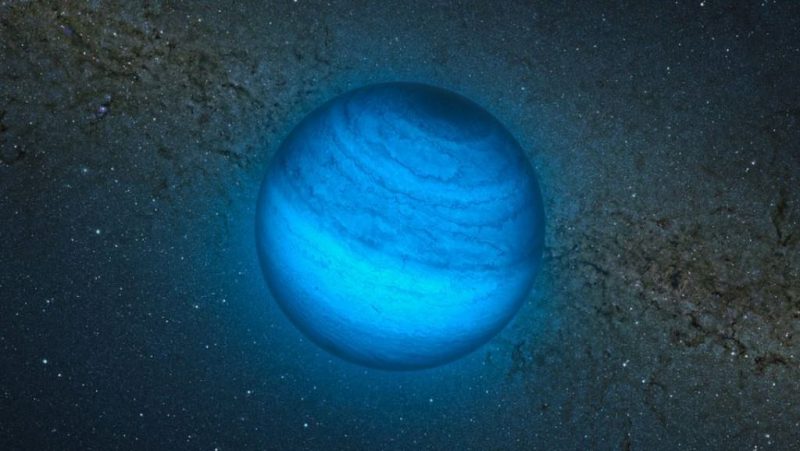 Artist’s concept of another rogue planet, CFBDSIR J214947.2-040308.9. It’s now estimated there may be one Jupiter-mass rogue planet for every 4 stars in our galaxy. Image via ESO/L. Calçada/P. Delorme/Nick Risinger/R. Saito/VVV Consortium.

Could there even be life on rogue planets? According to David Bennett, a senior NASA research scientist:

If you want to understand the possibility of life on other planets, it takes more than just finding one in the same size and orbit as Earth and trying to study it. There are many things that feed into a planet’s habitability – its atmosphere, its history, its water content – and those things can go all the way back to the details of its formation … If we really want to look for life, we need to understand the processes involved in planet formation, some of which can eject planets and make them free-floating.

Bottom line: SIMP is a bizarre world, floating freely through space in remote solitude. But far from being quiet, it has a powerful magnetic field, millions of times stronger than Earth’s, and intense auroras similar to Jupiter’s but much more powerful. Its unique nature will help astronomers learn more about magnetic fields on exoplanets and even help in discovering new exoplanets.

Source: The Strongest Magnetic Fields on the Coolest Brown Dwarfs

Via The Astrophysical Journal