How many asteroids in near-Earth space in mid-February, 2013?

Objects within 0.3 AU of the Earth – or within about a third of Earth’s distance fromt the sun – in mid-February 2013. From Armagh Observatory.

February 15, 2013 was a red-letter day for asteroids in near-Earth space. A small asteroid exploded in the atmosphere above Russia, followed by the much-publicized close flyby of asteroid 2012 DA14. Here’s a way to picture Earth and the asteroids near it in space, from Armagh Observatory in Northern Ireland. The image below is near-Earth space in mid-February, 2013. It shows all the objects within 0.3 AU of Earth on that day – that’s 45 million kilometers – or about 30 million miles – or about one-third of the distance between us and the sun. The red oval around Earth represents 3.84 million kilometers, or 10 lunar distances. 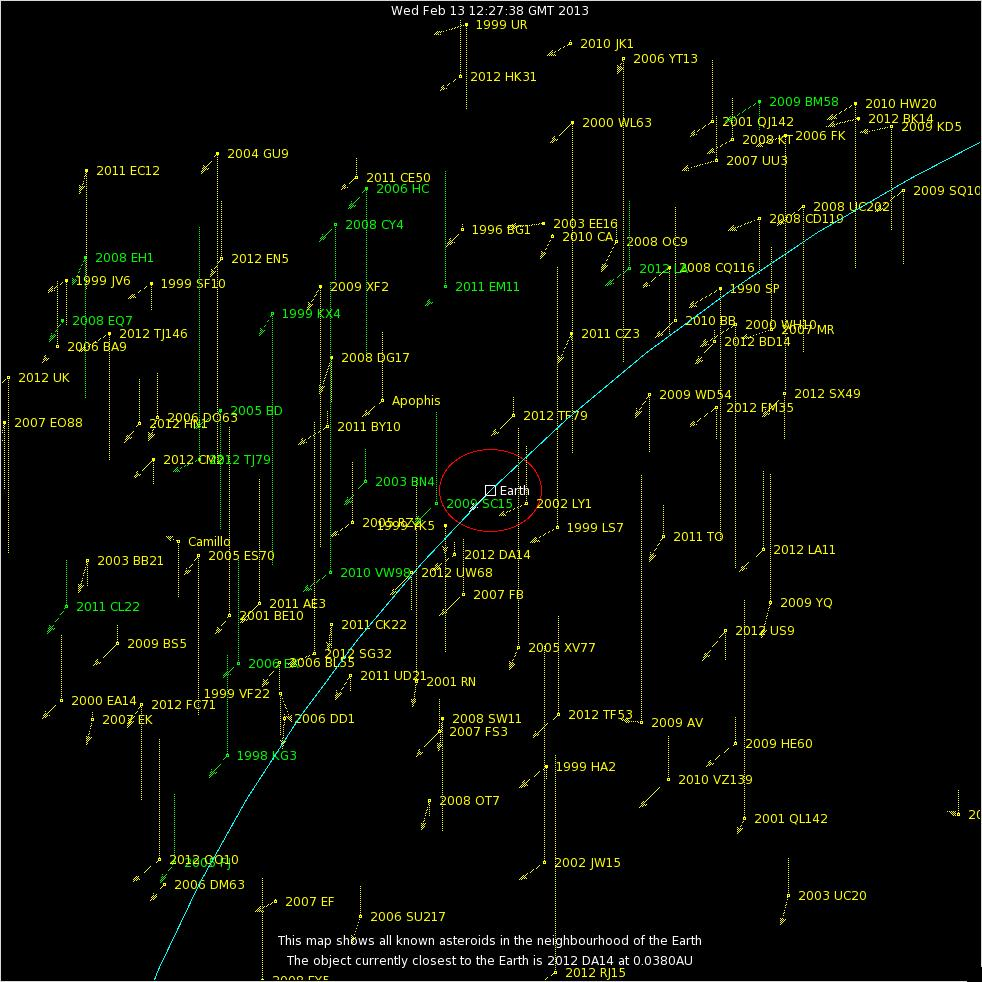 All asteroids within a third of Earth’s distance from the sun in mid-February, 2013 are shown, with Earth at the center, in pseudo 3D. The red oval around Earth represents a distance 10 times greater than the moon’s distance. View larger.. Computer-generated image via Scott Manley at Armagh Observatory

Scott Manley was a PhD candidate at Armagh Observatory in 1998 when he created the software needed to generate this image daily (he now works in San Francisco). Please be aware that the image isn’t depicting asteroids over some period of historic time. It’s a daily image, created with a computer program using data taken from from Ted Bowell’s online catalog of asteroid positions and movements (Bowell is an astronomer at Lowell Obsevatory in Flagstaff, Arizona).

See today’s image of asteroids near Earth in space here.

Scott Manley wrote of the image:

To represent the 3D nature of the positions every asteroid marked has its position projected onto the plane of the ecliptic (essentially the plane which the Earth’s orbit lies in). So the asteroid sits at the top (or bottom) of the ‘flagpole’ and the base of the pole shows where they would appear to be on the larger map of near Earth objects. In addition, the motion over the next 24 hours is represented by lines at the top of the poles.

How can we understand – and live with the idea of – the image above? One thing to remember is that space is much vaster relative to objects in space than this diagram perhaps indicates. I cannot tell you the exact scale of the area of space portrayed here, relative to the objects depicted. But I do know that, at this scale, the word Earth or the words 2012 DA14 are much, much bigger than the objects they represent. Perhaps Earth is a speck of dust at this scale, and the asteroids are microscopic? Something like that. At any rate, there is much more space out there than planets or asteroids, and that is why, contrary to your first impression after looking at this image, we are not being bombarded with asteroids every week or month or year. 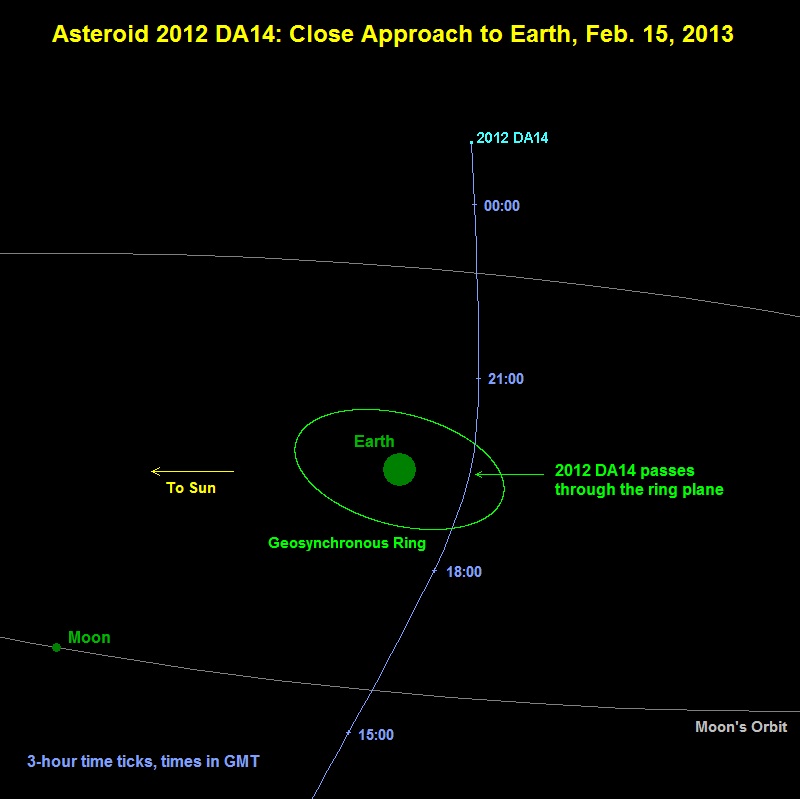 Asteroid 2012 DA14 passed closest on February 15, 2013. As the image above shows, it passed much closer than the orbit of the moon – closer even that orbiting geosynchronous satellites (22,000 miles). Image via NASA. Read more about the close asteroid flyby here.

Still, our Earth is being bombarded with objects from space with regularity – over timescales typically longer than our human lifespans – as astronomers have now realized. Asteroid 2012 DA14 did not strike us on February 15, 2013, and neither did the asteroid that exploded over Chelyabinsk, Russia. However, prior to its passage, 2012 DA14’s potential for destruction was being compared to an event that flattened hundreds of miles of forest and killed reindeer in Siberia in 1908: the Tunguska event. Likewise, the Russian meteor is now said to be the most powerful meteor to have exploded in Earth’s atmosphere since the Tunguska event. Earth is mostly water, so an incoming asteroid would likely land in the ocean. But the potential for destruction remains.

That is why, if an opportunity arises to express an opinion on whether funding should continue for astronomers to track and study near-Earth objects … well, personally, I would vote yes.

Bottom line: This diagram from Armagh Observatory shows the relative positions of near-Earth asteroids within a third of Earth’s distance from the sun in mid-February, 2013, when asteroid 2012 DA14 passed near Earth and when a small asteroid exploded in Earth’s atmosphere over Russia. Astronomer Scott Manley generated the software to create the daily image.

What happened in Tunguska in 1908?