Reddish Jovian Trojans travel in packs around the sun

WISE scientists have uncovered new clues in the ongoing mystery of the Jovian Trojans – asteroids that orbit the sun on the same path as Jupiter.

Scientists using data from NASA’s Wide-field Infrared Survey Explorer (WISE) have uncovered new clues in the ongoing mystery of the Jovian Trojans – asteroids that orbit the sun on the same path as Jupiter.

Like racehorses, the asteroids travel in packs, with one group leading the way in front of the gas giant, and a second group trailing behind. 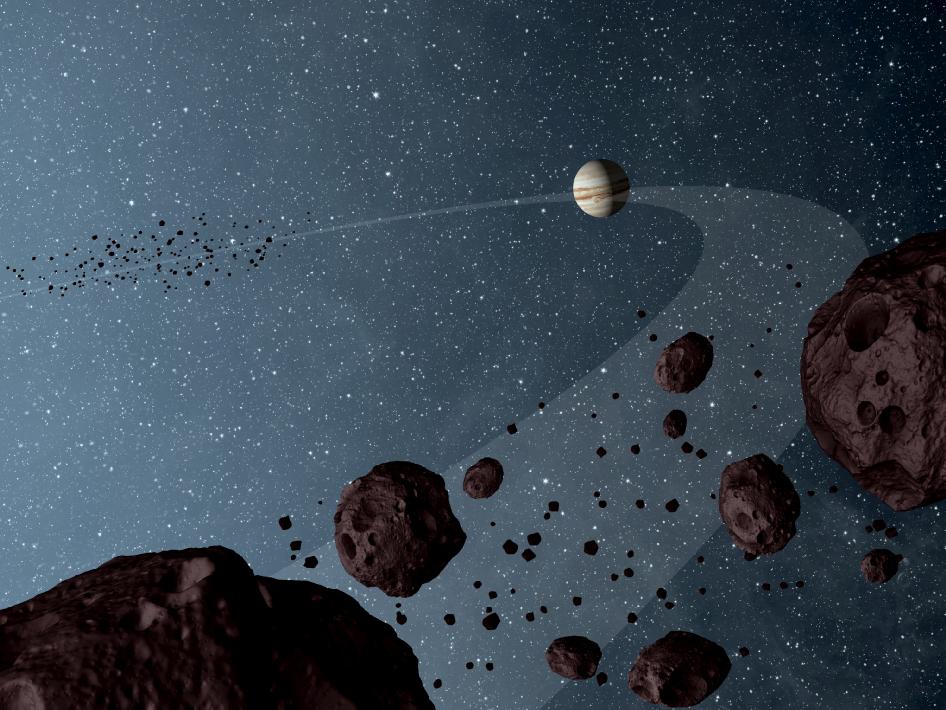 The observations are the first to get a detailed look at the Trojans’ colors: both the leading and trailing packs are made up of predominantly dark, reddish rocks with a matte, non-reflecting surface. What’s more, the data verify the previous suspicion that the leading pack of Trojans outnumbers the trailing bunch.

The new results offer clues in the puzzle of the asteroids’ origins. Where did the Trojans come from? What are they made of? WISE has shown that the two packs of rocks are strikingly similar and do not harbor any “out-of-towners,” or interlopers, from other parts of the solar system. The Trojans do not resemble the asteroids from the main belt between Mars and Jupiter, nor the Kuiper belt family of objects from the icier, outer regions near Pluto.

Tommy Grav, a WISE scientist from the Planetary Science Institute in Tucson, Arizona, is a member of the NEOWISE team, the asteroid-hunting portion of the WISE mission. He said:

Jupiter and Saturn are in calm, stable orbits today, but in their past, they rumbled around and disrupted any asteroids that were in orbit with these planets. Later, Jupiter re-captured the Trojan asteroids, but we don’t know where they came from. Our results suggest they may have been captured locally. If so, that’s exciting because it means these asteroids could be made of primordial material from this particular part of the solar system, something we don’t know much about.

The first Trojan was discovered on Feb. 22, 1906, by German astronomer Max Wolf, who found the celestial object leading ahead of Jupiter. Christened “Achilles” by the astronomer, the roughly 220-mile-wide (350-kilometer-wide) chunk of space rock was the first of many asteroids detected to be traveling in front of the gas giant. Later, asteroids were also found trailing behind Jupiter. The asteroids were collectively named Trojans after a legend, in which Greek soldiers hid inside in a giant horse statue to launch a surprise attack on the Trojan people of the city of Troy. Grav said:

The two asteroid camps even have their own ‘spy.’ After having discovered a handful of Trojans, astronomers decided to name the asteroid in the leading camp after the Greek heroes and the ones in the trailing after the heroes of Troy. But each of the camps already had an ‘enemy’ in their midst, with asteroid ‘Hector’ in the Greek camp and ‘Patroclus’ in the Trojan camp.

Other planets were later found to have Trojan asteroids riding along with them too, such as Mars, Neptune and even Earth, where WISE recently found the first known Earth Trojan.

Before WISE, the main uncertainty defining the population of Jupiter Trojans was just how many individual chunks were in these clouds of space rock and ice leading Jupiter, and how many were trailing. It is believed that there are as many objects in these two swarms leading and trailing Jupiter as there are in the entirety of the main asteroid belt between Mars and Jupiter.

To put this and other theories to bed requires a well-coordinated, well-executed observational campaign. But there were many things in the way of accurate observations – chiefly, Jupiter itself. The orientation of these Jovian asteroid clouds in the sky in the last few decades has been an impediment to observations. One cloud is predominantly in Earth’s northern sky, while the other is in the southern, forcing ground-based optical surveys to use at least two different telescopes. The surveys generated results, but it was unclear whether a particular result was caused by the problems of having to observe the two clouds with different instruments, and at different times of the year.

Enter WISE, which roared into orbit on Dec. 14, 2009. The spacecraft’s 16-inch (40-centimeter) telescope and infrared cameras scoured the entire sky looking for the glow of celestial heat sources. From January 2010 to February 2011, about 7,500 images were taken every day. The NEOWISE project used the data to catalogue more than 158,000 asteroids and comets throughout the solar system.

The results were presented October 15, 2012 at the 44th annual meeting of the Division for Planetary Sciences of the American Astronomical Society in Reno, Nev. Two studies detailing this research are accepted for publication in the Astrophysical Journal.

Bottom line: Two studies presented at the annual AAS meeting in October, 2012 used data from NASA’s Wide-field Infrared Survey Explorer (WISE) to uncover new clues in the ongoing mystery of the Jovian Trojans – asteroids that orbit the sun in packs on the same path as Jupiter.