For the 1st time, astronomers have seen giant bubbles roiling up to the surface of a star beyond our solar system. Each great bubble is so huge it would extend from our sun to Venus. 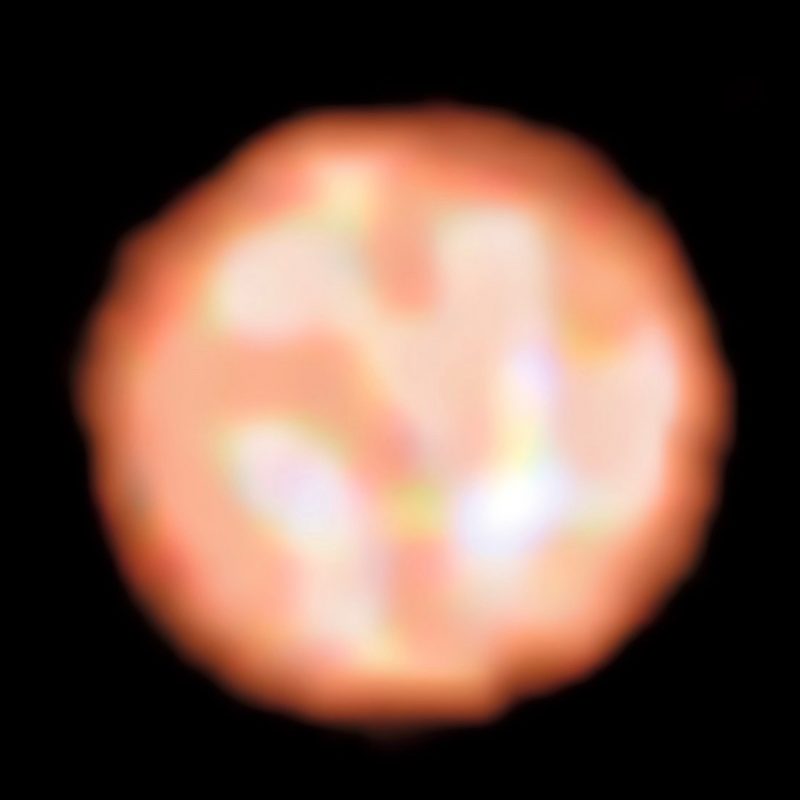 The red giant Pi1 Gruis. Astronomers used ESO’s Very Large Telescope with the PIONIER instrument to see the convective cells on its surface. Each cell covers more than a quarter of the star’s diameter and about 75 million miles (120 million km) across. Image via ESO.

With just a few exceptions, throughout the ages, whether using the eye alone or telescopes, astronomers have seen stars as pinpoints. Stars are really great balls of roiling gases, shining powerfully into space via thermonuclear reactions taking place in their interiors. But all stars besides our sun are so very distant that, even with telescopes, we’ve had very few direct glimpses of their surface features. Now, for the first time, astronomers have directly observed granulation patterns, caused by massive convection currents rising from the star’s interior, on the surface of a star outside our solar system. It’s no coincidence the star is a huge one, the aging red giant Pi1 Gruis, whose diameter is about 700 times that of our sun. The astronomers have seen the giant convective cells that make up the surface of this huge star. These new results are being published this week in the peer-reviewed journal Nature.

These astronomers used the European Southern Observatory’s (ESO’s) Very Large Telescope to make this observation, along with an instrument called PIONIER (Precision Integrated-Optics Near-infrared Imaging ExpeRiment). They said in their statement from ESO:

Located 530 light-years from Earth in the constellation of Grus (The Crane), Pi1 Gruis is a cool red giant. It has about the same mass as our sun, but is 700 times larger and several thousand times as bright. Our sun will swell to become a similar red giant star in about five billion years.

An international team of astronomers led by Claudia Paladini of ESO … found that the surface of this red giant has just a few convective cells, or granules, that are each about 75 million miles (120 million km) across — about a quarter of the star’s diameter. Just one of these granules would extend from the sun to beyond Venus. The surfaces — known as photospheres — of many giant stars are obscured by dust, which hinders observations. However, in the case of Pi1 Gruis, although dust is present far from the star, it does not have a significant effect on the new infrared observations.

When Pi1 Gruis ran out of hydrogen to burn long ago, this ancient star ceased the first stage of its nuclear fusion program. It shrank as it ran out of energy, causing it to heat up to over 100 million degrees. These extreme temperatures fueled the star’s next phase as it began to fuse helium into heavier atoms such as carbon and oxygen. This intensely hot core then expelled the star’s outer layers, causing it to balloon to hundreds of times larger than its original size. The star we see today is a variable red giant.

Until now, the surface of one of these stars has never before been imaged in detail. 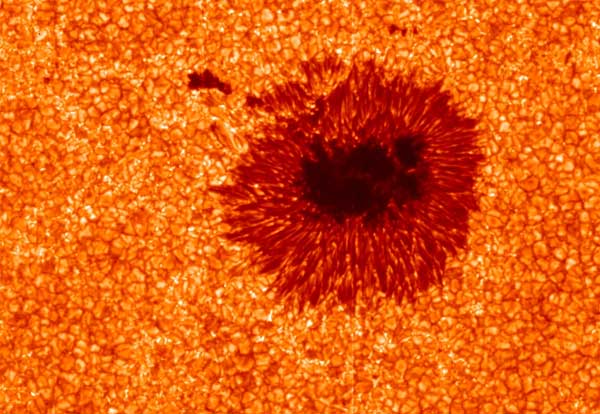 A piece of our sun’s surface, showing a sunspot and solar granulation. In part because the sun is more compact than Pi1 Gruis, it has millions of convective cells, instead of just a few. Image via the Hinode spacecraft.

In many ways, Pi1 Gruis is like our sun; both are stars, after all, and subject to many of the same processes. But, as with people, stars can be very different from each other. Pi1 Gruis has slightly more mass than our sun (about 1.5 solar masses), and a much larger volume, because it’s in a more advanced stage of its evolution. That may be why – in contrast to Pi1 Gruis’ few, very large convective cells – our sun’s photosphere contains about two million convective cells, with typical diameters of just 1,000 miles (1,500 km). The ESO statement explained:

The vast size differences in the convective cells of these two stars can be explained in part by their varying surface gravities. Pi1 Gruis is just 1.5 times the mass of the sun but much larger, resulting in a much lower surface gravity and just a few, extremely large, granules.

Doubtless if we could see Pi1 Gruis’ surface in even more detail, we’d be boggled at its beauty and complexity. That’s certainly the case with our own sun, whose surface has been revealed to us in recent decades by spacecraft, such as NASA’s Solar Dynamics Observatory, which captured the images to make the mesmerizing video below:

ESO also pointed out that the stage of life at which we see Pi1 Gruis is short-lived, on the timescale of stars:

While stars more massive than eight solar masses end their lives in dramatic supernovae explosions, less massive stars like this one gradually expel their outer layers, resulting in beautiful planetary nebulae. Previous studies of Pi1 Gruis found a shell of material 0.9 light-years away from the central star, thought to have been ejected around 20,000 years ago. This relatively short period in a star’s life lasts just a few tens of thousands of years – compared to the overall lifetime of several billion – and these observations reveal a new method for probing this fleeting red giant phase.

The video below, from ESO, zooms in on Pi1 Gruis.

Bottom line: For the 1st time, astronomers have seen giant bubbles roiling up to the surface of a star beyond our solar system. The star is an aging red giant, Pi1 Gruis, located about 530 light-years away.

Source: Large granulation cells on the surface of the giant star Pi1 Gruis