More images will be released soon, from Juno’s flyby of Earth on Wednesday. Plus check out a simulation of Juno’s unique perspective on Jupiter in 2016. 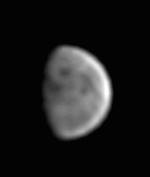 EarthSky friend on Facebook Andrew R. Brown posted these preliminary images from Wednesday’s flyby of the Juno spacecraft past Earth. The spacecraft passed within only 347 miles (558 km) of our planet on October 9, 2013, receiving a gravity assist from Earth that will help send the craft on its way to an encounter with Jupiter in 2016. After seeing so many wonderful spacecraft images over our lifetimes, it’s fun to see some that are unprocessed. Well, not entirely unprocessed; Andrew described the work he did on the moon image:

I have enlarged, rotated, cropped, contrast enhanced and sharpened the JUNOCAM Green filter view of the Moon as the Green filter had the best contrast to start with.

Mare Crisium is very clearly visible at upper centre, very unusual view. Mare Tranquilitatis with Mare Fecunditatis both on the left on the sunrise terminator.

Mare Marginis and Mare Smythii are to the right towards the limb over on the lunar far side. 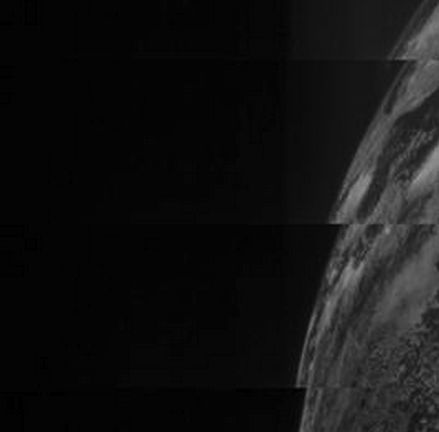 While the main reason for Wednesday’s flyby was the extra gravity boost for Juno to help it along on its journey to Jupiter, the spacecraft’s science instruments were to be activated to sample the Earth environment on Wednesday – a practice run for data-taking when the spacecraft reaches Jupiter in 2016. One of Juno’s activities during the Earth flyby was to make a movie of the Earth-moon system that will be the first to show Earth spinning on its axis from a distance. We expect to see that movie in the days ahead.

For now, the spacecraft has gone into a safe mode, according to a story published today (October 11) by UniverseToday.com. Ken Kremer wrote in that article:

Juno performed a crucial swingby of Earth on Wednesday that accelerated the probe by 16330 MPH to enable it to arrive in orbit around Jupiter on July 4, 2016.

However the gravity assist maneuver did not go entirely as planned.

Shortly after Wednesday’s flyby, Juno Project manager Rick Nybakken, of JPL, told [Kremer] in a phone interview that Juno had entered safe mode but that the probe was “power positive and we have full command ability.”

The most important outcome is that Juno is now on its way to Jupiter, as planned. The real science for the Juno spacecraft will begin when the craft begins orbiting Jupiter some 33 times over the course of a year, beginning in 2016.

Juno will be the first spacecraft to orbit Jupiter over its poles, providing a unique perspective on Jupiter, as shown in the simulated view below. Juno’s orbit around Jupiter will be highly eccentric, taking Juno from just above the cloud tops to a distance of about 1.75 million miles from Jupiter, every 11 days.

Click here for more about Juno’s October 9 flyby of Earth. 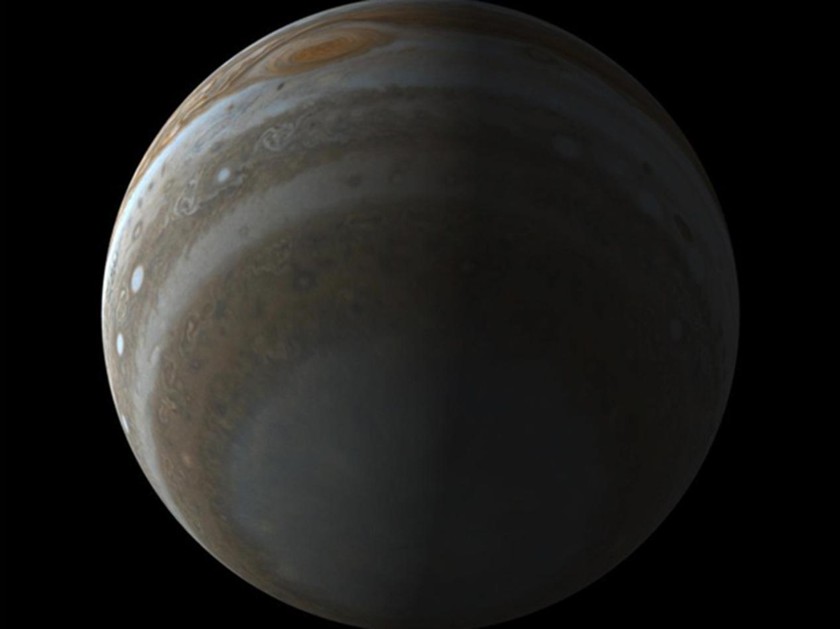 View larger. | Here’s a simulated view of the south pole of Jupiter, as it will be seen by the Juno spacecraft in 2016. This simulation illustrates the unique perspective of the Juno mission. The spacecraft’s polar orbit will allow Junocam to image Jupiter’s clouds from a vantage point never accessed by other spacecraft. Junocam has a 58-degree-wide field of view encompassing the entire polar region. The view illustrated here simulates an image taken 40 minutes before Juno’s closest approach to Jupiter. At closest approach, Junocam’s images of Jupiter’s cloud tops will have a resolution better than 5 kilometers per pixel.
Image via NASA / JPL / MSSS via the Planetary Society. 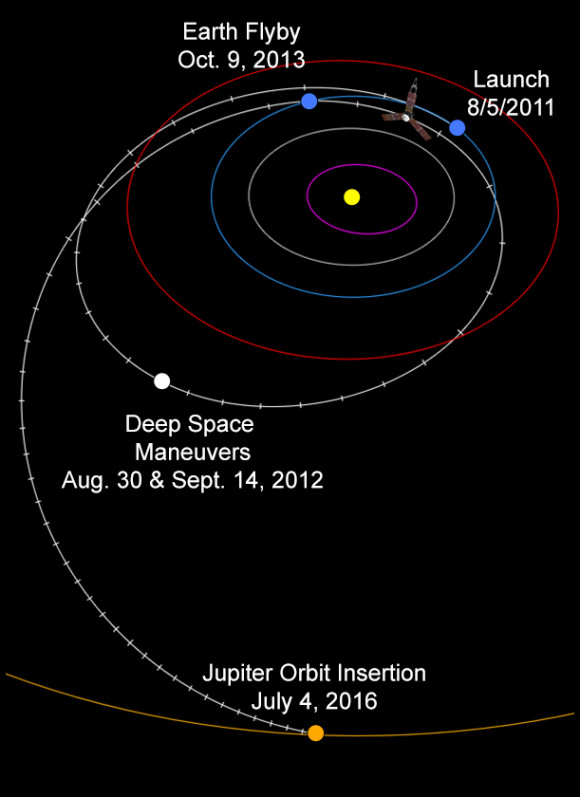 Several commenters on EarthSky Facebook expressed surprise this week that Juno would take so long to get to Jupiter. Distances in space are vast. And the craft is in fact taking a roundabout route to the giant planet, as illustrated by the diagram above. This is the Juno spacecraft’s route to Jupiter, via NASA.