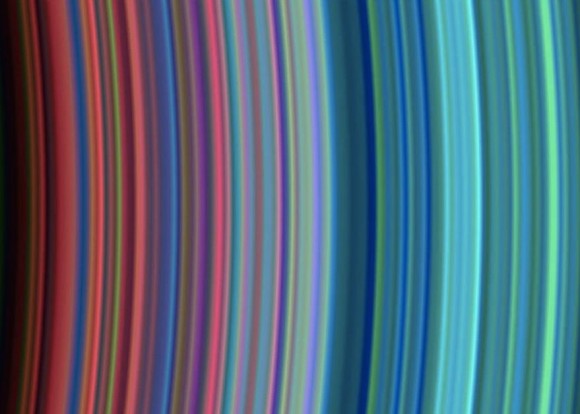 Saturn’s rings, via the Cassini spacecraft. The region shown in this image spans about 10,000 kilometers (about 6,000 miles). Credit: NASA/JPL/University of Colorado

The European Space Agency posted this image on its Flickr page this week (May 5, 2014). It shows a section of Saturn’s beautiful rings, first observed in the year 1610 by early telescopes … and more recently observed close-up by the Cassini spacecraft, which has been orbiting Saturn, weaving in and among its moons, since 2004.

This image shows a portion of Saturn C-ring. The image is closest to Saturn on the left, with the B-ring beginning just right of center.

The variation in the color of the rings arises from the differences in their composition. Turquoise-hued rings contain particles of nearly pure water ice, while reddish rings contain ice particles with more contaminants.

Here’s one of the latest views of Saturn by the Cassini spacecraft. Cassini acquired the data – and Val Klavans processed it into this composite image May 4, 2014. More details on Flickr