Questions of life on Mars revive with methane spike

Curiosity rover has now measured a dramatic spike in methane, an organic chemical, in the Martian air, plus other organic molecules in a Martian rock. 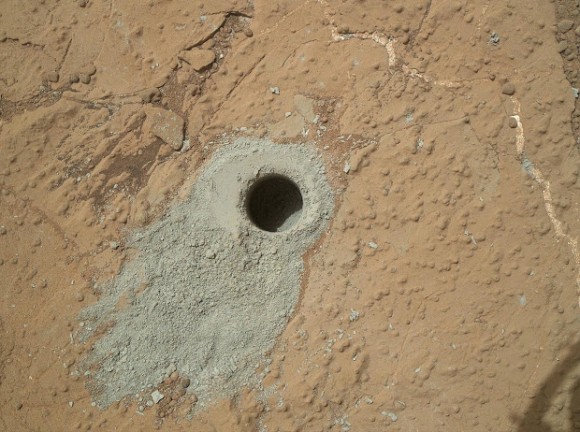 A drill hole on Mars. The robot rover Curiosity detected a temporary spike in methane in the air around itself, and it detected different Martian organic chemicals in a Martian rock. Image via NASA/JPL-Caltech/MSSS

The mystery of whether Mars has or ever had life got a boost today (December 16, 2014) when NASA announced that its Curiosity rover – which landed on Mars in August, 2012 – has measured a tenfold spike in methane in the atmosphere around the rover. NASA scientists made the announcement at the annual meeting of the American Geophysical Union in San Francisco. The journal Science also published these results today.

Methane is an organic chemical, and it’s conceivable, although far from certain, methane-belching microbes on Mars might be responsible for the spike.

However, for about a two-month period in late 2013 and early 2014, researchers did observe a temporary and dramatic increase in methane in the Martian air around the rover.

At the same time, for the first time ever, the rover has detected other organic molecules in a rock-powder sample collected by drilling into a rock on Mars, which scientists have dubbed Cumberland. Organic molecules, which contain carbon and usually hydrogen, are chemical building blocks of life (although they can exist without the presence of life). NASA says it’s the first definitive detection of organics in surface materials of Mars. These Martian organics could either have formed on Mars or been delivered to Mars by meteorites, scientists say.

Is there life on Mars today, or was there ever life on Mars? These results don’t prove either speculation. However, said John Grotzinger, Curiosity project scientist of the California Institute of Technology in Pasadena:

We will keep working on the puzzles these findings present. Can we learn more about the active chemistry causing such fluctuations in the amount of methane in the atmosphere? Can we choose rock targets where identifiable organics have been preserved?

NASA says that Curiosity is:

… one element of NASA’s ongoing Mars research and preparation for a human mission to Mars in the 2030s.

Read more about Curiosity’s measurement of a methane spike on Mars.

Bottom line: Mars Curiosity rover measures a dramatic spike in methane and detects other organic molecules in a rock-powder sample collected by the robotic laboratory’s drill.