Astronomers didn’t expect so many quasars to have halos. The discovery may help them probe the large-scale structure of the universe, aka the cosmic web. 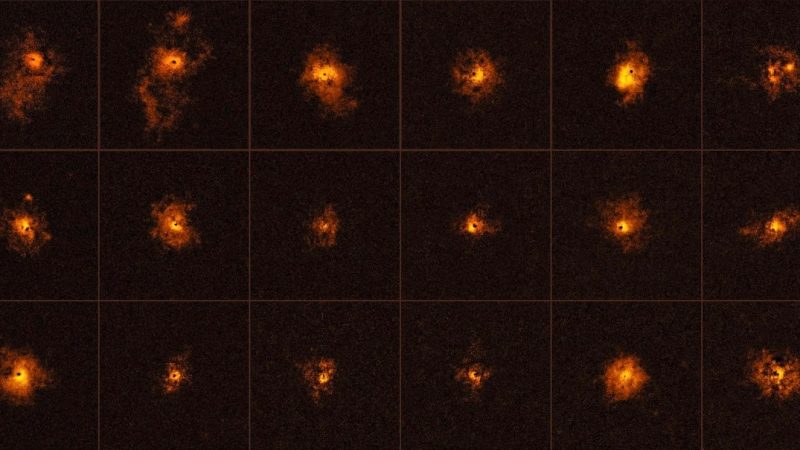 Eighteen of the 19 quasars recently observed by an international team of astronomers. Each observed quasar has a bright gaseous halo around it. Image via ESO.

An international team of astronomers said in late October 2016 that halos around distant quasars – which are thought to be active galaxies in the very early universe, with supermassive black holes actively feeding in their centers – are far more common than previously believed.

They base this announcement on a recent study of 19 quasars, selected from among the brightest that are observable. Previous studies suggested that around 10% of all quasars might be surrounded by halos. This new study showed large halos around all 19 quasars observed.

The halos – which extend up to 300,000 light-years away from the centers of the quasars – are made from gas in the space between the galaxies.

The study is important because of what it reveals about our universe on its largest scale, at least, the largest so far understood by our astronomers. Astronomers refer to this largest scale of our universe as the cosmic web. The video below attempts to describe it.

As astronomers look back into the very early universe, they see quasars and visualize them forming the bright nodes of the cosmic web. Meanwhile, the gaseous components of the web are extremely difficult to detect.

And that’s why this study – revealing gaseous halos around quasars – is so important. The study set out to analyze the gaseous components of the cosmic web, by searching for quasars’ halos. The astronomers’ statement said:

… the illuminated halos of gas surrounding the quasars deliver an almost unique opportunity to study the gas within this large-scale cosmic structure.

The team said it suspects its finding of halos around all 19 quasars is due to the observing power of of the instrument they used to observe the 19 quasars. They were observing with the MUSE instrument on ESO’s Very Large Telescope. MUSE – which had its first light in January, 2014 – stands for Multi Unit Spectroscopic Explorer.

The astronomers say more observations are needed to determine whether, indeed, most or all quasars have halos like the 19 observed in this study. Lead author Elena Borisova, from the ETH Zurich, said:

It is still too early to say if this is due to our new observational technique or if there is something peculiar about the quasars in our sample.

So there is still a lot to learn; we are just at the beginning of a new era of discoveries.

Read more about the study of 19 quasars from ESO 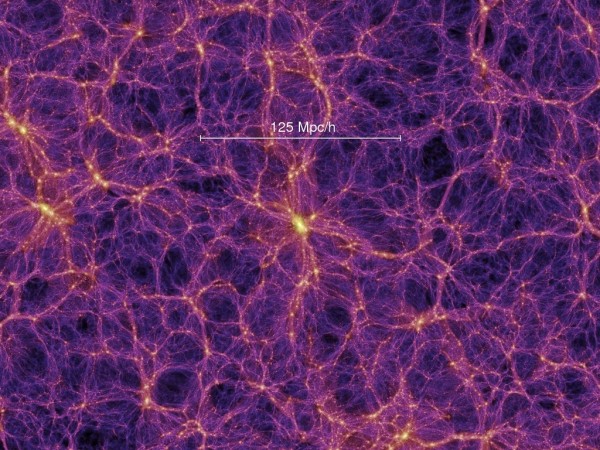 Astronomers believe the early universe was nearly uniform as it expanded outward from the Big Bang. By a few billion years after the Big Bang, areas of slightly higher density had evolved to become galaxy clusters and groups, with sparsely populated regions devoid of galaxies in between. The universe as a whole evolved to this honeycomb-like structure, sometimes called the “cosmic web.” In this artist’s illustration, Mpc/h is a unit of distance, with 1 Mpc/h more than 3.2 million light-years. Image via Volker Springel, Virgo Consortium.

Bottom line: A recent study of 19 quasars revealed halos around all 19. The halos are made from gas in the intergalactic medium. Astronomers didn’t expect to find so many quasars surrounded by halos. They say this discovery should help them probe the large-scale structure of the universe, aka the cosmic web.