A giant collection of galaxies immersed in hot gas about 250 million light years from Earth. 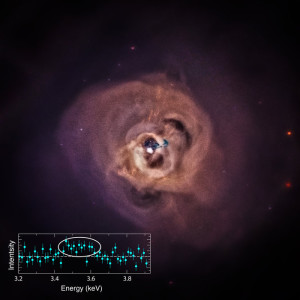 A new study of the Perseus galaxy cluster, shown in this image, and others using Chandra and XMM-Newton has revealed a mysterious X-ray signal in the data. This signal is represented in the circled data points in the inset, which is a plot of X-ray intensity as a function of X-ray energy. The signal is also seen in over 70 other galaxy clusters using XMM-Newton. This unidentified X-ray emission line – a spike of intensity centered on about 3.56 kiloelectron volts – requires further investigation to confirm both the signal’s existence and nature. One possibility is this signal is from the decay of sterile neutrinos, one proposed candidate to explain dark matter.

Thank you! Your submission has been received!
Oops! Something went wrong while submitting the form.
END_OF_DOCUMENT_TOKEN_TO_BE_REPLACED