At Palomar Observatory near San Diego, a dedicated telescope spends its nights surveying the heavens. A recent analysis of its data revealed 4 stars that change in brightness, over just minutes. 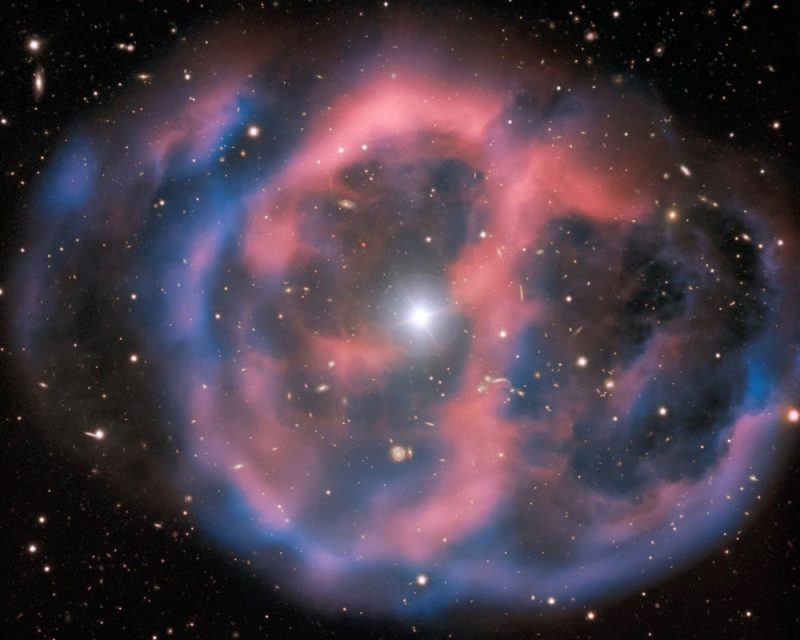 Scientists have discovered a new type of pulsating star, called hot subdwarf pulsators. In other words, the stars are hot, they’re on the small side, and they change rapidly in brightness. This photo shows a nebula, or cloud, surrounding a dead giant star, now categorized as a subdwarf O. Photo via European Southern Observatory.

News of the discovery was published in the peer-reviewed Astrophysical Journal Letters in June. Kupfer explained in a statement:

Many stars pulsate. Even our sun does on a very small scale. Those with the largest brightness changes are usually radial pulsators, ‘breathing’ in and out as the entire star changes size.

By studying pulsations in detail, scientists can learn about these stars’ interior properties, he said.

Like so many discoveries in astronomy, this one was serendipitous. Kupfer and his colleagues at Caltech were searching for extremely close binary, or double, stars in data from the Zwicky Transient Facility (ZTF), which is located at the Palomar Observatory near San Diego, California. The ZTF uses a 48-inch telescope and a camera with a 47-square-degree field of view to scan (or “survey”) the sky. Four stars stood out due to large changes in their brightness over just a few minutes. Follow-up data quickly confirmed that they were indeed pulsators, not binary pairs.

Kupfer and his collaborators have now identified the stand-out stars as what are called hot subdwarf pulsators. A subdwarf is a star about one-tenth the diameter of the sun with a mass between 20 and 50 percent that of sun. They’re incredibly hot — up to 90,000 degrees Fahrenheit (50,000 degrees Celsius), compared to the sun’s 10,000 F (5,500 C). Team member Lars Bildsten, also of UC Santa Barbara, explained:

These stars have certainly completed fusing all of the hydrogen in their core into helium, explaining why they are so small and can oscillate so rapidly.

Read more about the different types of pulsating stars

The discovery came as a surprise. Scientists hadn’t previously predicted the existence of these stars … but in retrospect they fit well into the leading models of stellar evolution.

Because of the stars’ low masses, the team believes they started life as typical sun-like stars fusing hydrogen to helium in their cores. After exhausting the hydrogen in their cores, the stars expanded into the red giant stage. Usually, a star will reach its largest radius and begin fusing helium deep in the core. However, the scientists think these newly discovered stars had their outer material stolen by a companion before the helium became hot and dense enough to fuse.

In the past, hot subdwarfs were almost always related to stars which became red giants, started fusing helium in their cores, and then got stripped by a companion. The new findings indicate that this group includes different types of stars.

Some do helium fusion and some don’t.

These astronomers said the stars’ pulsations let them probe the masses and radii of the stars, and then compare these measurements to computer models of how stars behave. UC Santa Barbara astrophysics postdoctoral student Even Bauer (@evbauer_astro on Twitter), also a team member, commented:

We were able to understand the rapid pulsations by matching them to theoretical models with low mass cores made of relatively cold helium.

Thus a chance discovery by a sky survey instrument – which spends its nights silently, steadily observing the heavens – has led to new insights on the way stars evolve. Kupfer commented:

I expect that these large, time-domain surveys like the Zwicky Transient Facility will bring many unexpected discoveries in the future.

Bottom line: Scientists have discovered a new type of pulsating star, called hot subdwarf pulsators. In other words, the stars are hot, they’re on the small side, and they change rapidly in brightness.

Via University of California, Santa Barbara