Two stars in a double system are not playing nice. One star, a pulsar, has punched a hole in the disk of the other, sending debris outward at 7% of light speed! 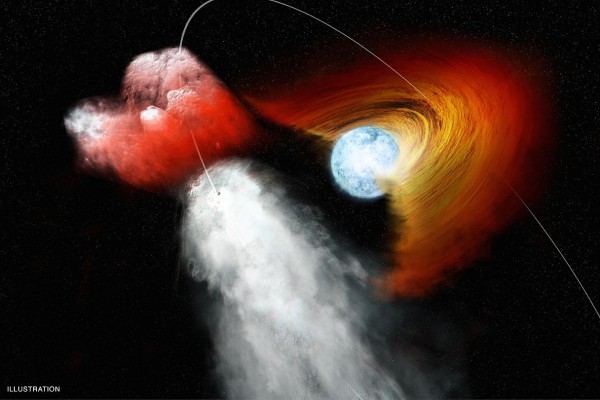 View larger. | Artist’s concept of a pulsar punching a hole in a stellar disk. This illustration shows the pulsar just after colliding with the disk. Image via NASA/CXC/PSU/G.Pavlov et al

NASA’s Chandra X-ray Observatory announced last week (July 22, 2015) that it has found a huge clump of stellar material – spanning over a hundred times the size of our solar system – which has been jettisoned away from a double star system at incredibly high speeds. Researchers think that one of the objects in the double system – a pulsar – knocked out the chunk of debris when it collided with the disk around the other object in the system, a massive star. The chunk of debris seems to be moving at between 7% and 15% of the speed of light! That’s at least about 4 million miles per hour. These results appear in the June 20, 2015 issue of The Astrophysical Journal.

This image above is an artist’s concept of the double star system, known as PSR B1259-63/LS 2883, or B1259 for short. The two objects – the pulsar and the massive star – orbit around one another in only 41 Earth-months. The massive star about 30 times more massive than our sun and has a disk of material swirling around it. The pulsar, an ultra-dense neutron star, was presumably left behind when an even more massive star underwent a supernova explosion.

The ejected clump is large – a hundred times the size of our solar system – but it’s not very dense. The material in it has the mass equivalent to all the water in the Earth’s oceans.

The images above are real images of this system, from the Chandra X-Ray Observatory. Chandra acquired the images between December 2011 and February 2014. The bright source in the center of these images is the binary system, while the smaller point-like source to the lower right seen in the second two observations is the clump that has been dislodged.

The Chandra observations suggest that the clump is not only moving quickly (at least 7% of light speed), but may, in fact, be picking up speed. The data suggest it may have accelerated to 15% the speed of light between the second and third observations. This acceleration could be due to intense winds flowing off of the pulsar’s surface at nearly the speed of light, which are caused by its rapid rotation and strong magnetic fields. Oleg Kargaltsev of George Washington University in Washington, DC, a co-author on the study, commented:

After this clump of stellar material was knocked out, the pulsar’s wind appears to have accelerated it, almost as if it had a rocket attached.

The X-ray emission observed by Chandra is likely produced by a shock wave created as the pulsar’s wind rams into the clump of material. The ram pressure generated by this interaction could also accelerate the clump.

Chandra will continue monitoring B1259 and its moving clump with observations scheduled for later this year and in 2016.

Bottom line: X-ray astronomers have found a double star system consisting of a pulsar and a massive star. The pulsar has collided with a disk of debris around the other star, sending a chunk of debris outward. The ejected chunk is 100 times as wide as our solar system and is moving outward at 7-15% of the speed of light.