“It’s like taking a single picture of the Empire State Building from an airplane that reveals a bump on the sidewalk next to it that is as high as an ant.”

The blackened circle in the center of the image below is a large star, known to astronomers as HR 8799. It’s located about 129 light-years away. In this image, astronomers have optically suppressed (blotted out) the star’s light, in order to gaze directly upon its system of at least four known giant, red planets. In 2008, three of these planets were among the first ever directly imaged around a star. Astronomers got direct views of the fourth planet, closest to the star and hardest to see, in 2010. That was an accomplishment; before that, all planet discoveries had been made through indirect means, for example by looking for the wobble of a star that occurs as planets orbit around it. But just seeing the planets isn’t enough. Now astronomers want to know about the atmospheres of these and other distant worlds. 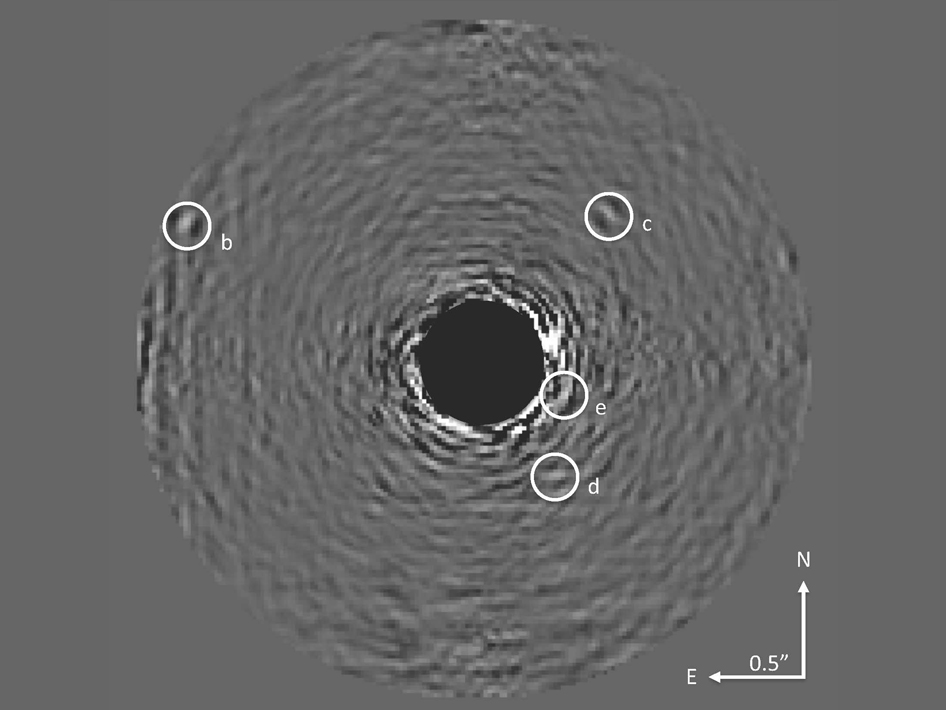 This image is amazing because it’s a direct look at four known exoplanets, all orbiting a large star called HR 8799, located some 129 light-years away. In other words, what you’re seeing here is a distant solar system. Even more amazing, astronomers have now been able to use spectroscopic analysis to probe for information about the atmospheres of these planets. Image courtesy of Project 1640.View larger.

This image shows the HR 8799 planets. The four spots indicated with the letters b through e are the planets. This is a composite image using 30 wavelengths of light and was obtained over a period of 1.25 hours on June 14 and 15, 2012.

A team of researchers belonging to a group called Project 1640 – partly funded by NASA’s Jet Propulsion Laboratory in Pasadena, California – have now used the Palomar Observatory near San Diego to obtain detailed spectra of these four planets. In other words, they’ve managed to split the light reflected from these worlds into a rainbow array of colors. This work lets the astronomers probe for information about the atmospheres of the planets. Gautam Vasisht of JPL, co-author of a new study about this work appearing in the Astrophysical Journal said in a May 9, 2013 press release:

In just one hour, we were able to get precise composition information about four planets around one overwhelmingly bright star. The star is a hundred thousand times as bright as the planets, so we’ve developed ways to remove that starlight and isolate the extremely faint light of the planets.

The Project 1640 team used a combination of instruments, including a coronagraph to mask out starlight; an advanced adaptive optics system, which removes the blur of our moving atmosphere by making millions of tiny adjustments to two deformable telescope mirrors; an imaging spectrograph that records 30 images in a rainbow of infrared colors simultaneously; and a state-of-the-art wave front sensor that further adjusts the mirrors to compensate for scattered starlight. Ben R. Oppenheimer – chair of the Astrophysics Department at the American Museum of Natural History in New York and lead author of the new study – said:

It’s like taking a single picture of the Empire State Building from an airplane that reveals a bump on the sidewalk next to it that is as high as an ant.

All four planets are nearly the same in temperature. But, as Project 1640’s work showed, they have different chemical compositions. Unexpectedly, some of the planets’ atmospheres do not have methane, and there may be hints of ammonia or other compounds that would also be surprising.

Further theoretical modeling will help to understand the chemistry of these distant worlds.

Read more about Project 1640 from NASA: Sifting through the atmospheres of far-off planets

Bottom line: On May 9, 2013, NASA released a press release discussing Project 1640, which is partially funded by NASA’s Jet Propulsion Laboratory. Project 1640 consists of various astronomers who want to use spectroscopy – or the splitting of light into rainbow colors – to gain insight into the atmospheres of exoplanets. In particular, they now have insight into the atmospheric compositions of four known planets orbiting the large star HR 8799.