Astronomers thought the 1st galaxies would be small. Now they’ve spotted 2 giant galaxies from when the universe was only 5% of its current age. 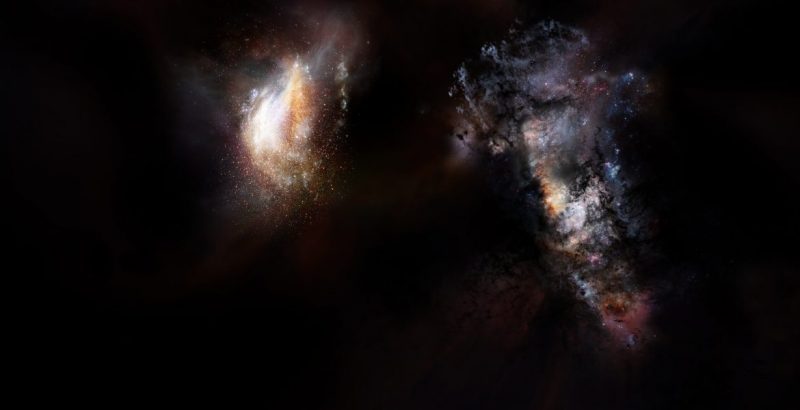 View larger. | Artist’s concept of SPT0311-58, a pair of massive galaxies in the very early universe. Researchers say galaxies of this era are “messier” than the ones we see in the nearby universe. Their more jumbled shapes are due to the vast stores of gas raining down on them and their ongoing interactions and mergers with their neighbors. Image via NRAO/ AUI/ NSF; D. Berry.

Our solar system – our sun and family of planets – is thought to have been built from clumps of space stuff sticking together. Likewise, astronomers expected the first galaxies – those that formed shortly after the Big Bang – to resemble the little dwarf galaxies we see today, so that they’d serve as building blocks for larger galaxies that came later. And so nature surprised us by revealing examples of massive, star-filled galaxies seen when the cosmos was less than a billion years old. Now, new observations with the Atacama Large Millimeter/submillimeter Array (ALMA) in Chile have revealed two giant galaxies seen even farther away, and longer ago, when the universe was only 780 million years old, or about 5 percent its current age. These giant, early galaxies – collectively known as SPT0311-58 – appear to be nestled inside an even-more-massive dark matter halo, containing several trillion times the mass of our sun.

The researchers reported their findings in the peer-reviewed journal Nature on December 6, 2017.

They said these two giant, early galaxies are close to each other, less than the distance from Earth to the center of our Milky Way galaxy. That’s why, they think, the galaxies will shortly merge to form the largest galaxy ever observed at that period in cosmic history. Dan Marrone, associate professor of astronomy at the University of Arizona in Tucson and lead author on the paper, said in a statement:

With these exquisite ALMA observations, astronomers are seeing the most massive galaxy known in the first billion years of the universe in the process of assembling itself. 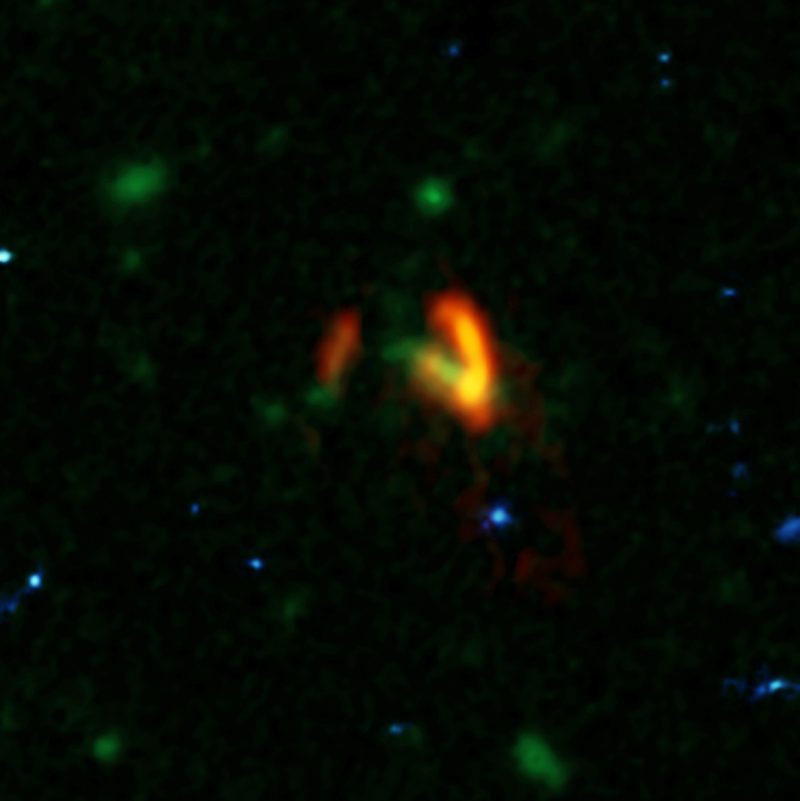 A composite image showing ALMA data (red) of the two galaxies of SPT0311-58. These galaxies are shown over a background from the Hubble Space Telescope (blue and green). The ALMA data show the two galaxies’ dusty glow. The image of the galaxy on the right is distorted by gravitational lensing. The nearer foreground lensing galaxy is the green object between the two galaxies imaged by ALMA. Image via ALMA (ESO/NAOJ/NRAO), Marrone, et al.; B. Saxton (NRAO/AUI/NSF); NASA/ESA Hubble.

Located in the Atacama desert of northern Chile, ALMA is one of the world’s most advanced tools for astronomical observing. It’s an interferometer of radio telescopes, which has been fully operation only since March of 2013. It’s made possible by an international partnership between Europe, the United States, Canada, Japan, South Korea, Taiwan, and Chile. But even ALMA couldn’t see so far back into space and time without help.

In this case, the help came from nature itself, which produces what is called a a gravitational lens whenever an intervening massive object, like a galaxy or galaxy cluster, bends the light from more distant galaxies. In a universe of at least 100 billion galaxies (or more), this happen pretty often, but can be tricky to observe. Although galaxies between us and SPT0311-58 bent and magnified their light, sophisticated computer models were required to reconstruct the image of SPT0311-58 as these galaxies would appear in an unaltered state.

Yet the process of teasing out this data from the observations yielded yet more information according to these astronomers:

Justin Spilker at the University of Texas at Austin, a co-author on the study, commented:

That’s a whopping large quantity of dust, considering the young age of the system.

The astronomers believe the larger galaxy’s pace of star formation was likely triggered by a close encounter with its slightly smaller companion, which already hosts about 35 billion solar masses of stars and is also forming stars at a rate of about 540 solar masses per year.

The new observations also allowed the researchers to infer the presence of a truly massive dark matter halo surrounding both galaxies. Dark matter is thought to provide the pull of gravity that causes the universe to collapse into structures such as galaxies, groups and clusters of galaxies and so on. By comparing their calculations with current cosmological predictions, the researchers found that this halo is one of the most massive that should exist at that time. 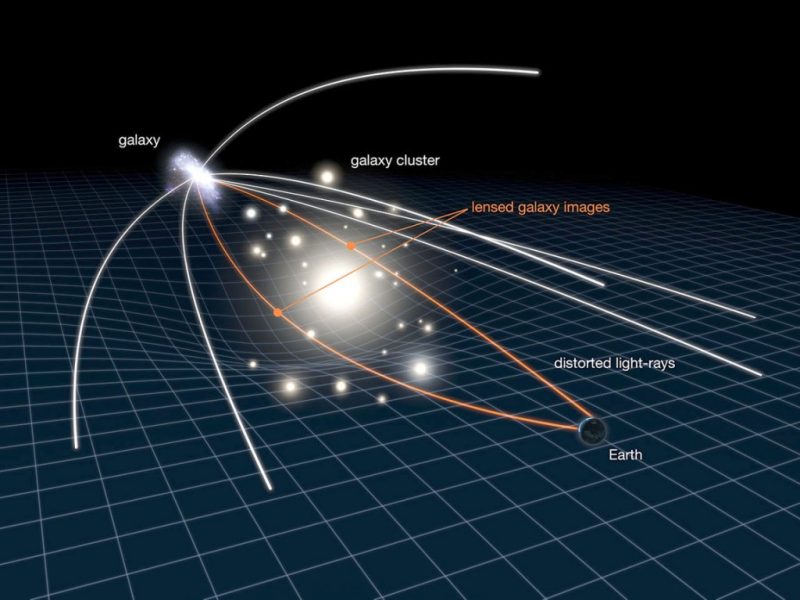 Gravitational lensing works – as Albert Einstein explained in his theory of general relativity – mass bends light. The gravitational field of a distant galaxy or galaxy cluster causes light to bend around it. From Earth, we see the light as displaced from where it would otherwise be. Image via SpaceTelescope.org.

The astronomers said they are seeing these galaxies during a period of cosmic history known as the Epoch of Reionization:

… when most of intergalactic space was suffused with an obscuring fog of cold hydrogen gas. As more stars and galaxies formed, their energy eventually ionized the hydrogen between the galaxies, revealing the universe as we see it today.

In any case, our next round of ALMA observations should help us understand how quickly these galaxies came together and improve our understanding of massive galaxy formation during reionization.

Read more about this study from NRAO

To correct for the effects of gravitational lensing in these galaxies, the ALMA data (left panel) is compared to a lensing-distorted model image (second panel from left). The difference is shown in the third panel from the left. The structure of the galaxy, after removing the lensing effect, is shown at right. This image loops through the different velocity ranges within the galaxy, which appear at different frequencies to ALMA due to the Doppler effect. Image via ALMA (ESO/NAOJ/NRAO); D. Marrone et al.

Bottom line: Astronomers thought galaxies in the early universe would be small. But they’ve just spotted 2 giant galaxies – collectively known as SPT0311-58 – at a time when the universe was only 780 million years old, or about 5 percent its current age.

Source: Galaxy growth in a massive halo in the first billion years of cosmic history