Water plumes erupting on Jupiter’s moon Europa might make it easier to investigate whether life exists in the warm ocean believed to be deep beneath its icy surface.

Astronomers using the Hubble Space Telescope have imaged what might be water vapor plumes erupting off the surface of Jupiter’s moon Europa, NASA announced yesterday (September 26, 2016).

Scientists estimate that the plumes rise about 125 miles (200 km) before, presumably, raining material back down onto Europa’s surface. The findings might make it easier to investigate whether life exists in the warm, salty ocean believed to be deep beneath the world’s icy surface. 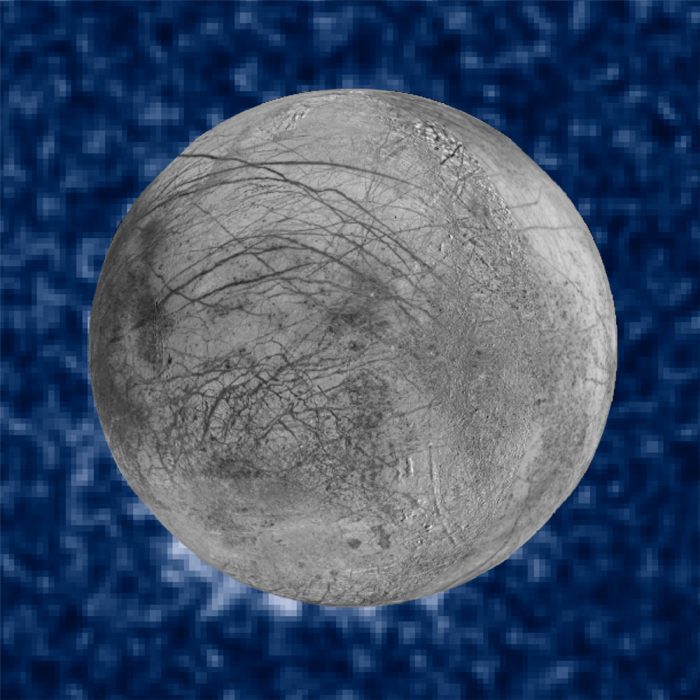 This composite image shows suspected plumes of water vapor erupting at the 7 o’clock position off the limb of Jupiter’s moon Europa. The plumes, photographed by NASA’s Hubble’s Space Telescope Imaging Spectrograph, were seen in silhouette as the moon passed in front of Jupiter. Hubble’s ultraviolet sensitivity allowed for the features, rising over 100 miles (160 km) above Europa’s icy surface, to be discerned. The water is believed to come from a subsurface ocean on Europa. The Hubble data were taken on January 26, 2014. Image via NASA.

Scientists’ consensus is that Europa has a huge global ocean containing twice as much water as Earth’s oceans, but it is protected by a layer of extremely cold and hard ice of unknown thickness. The plumes provide a tantalizing opportunity to gather samples originating from under the surface without having to land or drill through miles of ice.

Europa’s ocean is considered to be one of the most promising places that could potentially harbor life in the solar system. These plumes, if they do indeed exist, may provide another way to sample Europa’s subsurface.

Jupiter has 67 known moons. Europa is the sixth-closest to the planet and about 1,900 miles (3,100 km) in diameter, slightly smaller than Earth’s moon.

If the findings are confirmed, Europa would be the second moon in the solar system known to have water vapor plumes. In 2005, NASA’s Cassini orbiter detected jets of water vapor and dust spewing off the surface of Saturn’s moon Enceladus.

The new study will be published in the September 29, 2016 issue of the Astrophysical Journal.