Chiron is the second minor planet and the second centaur – orbiting beyond Jupiter in the outer solar system – suspected to have a ring system.

Artist’s impression of the remote asteroid Chariklo, which was discovered a year ago to have two dense and narrow rings. Now another minor planet, Chiron, might have rings, too. If so, it’ll be the 6th body in our solar system known to have a ring system. Image via ESO

We started with one ringed planet, Saturn. Then, as technology improved and spacecraft began venturing out into the solar system, scientists discovered that rings also encircle Jupiter, Uranus, and Neptune. And a year ago the minor planet Chariklo – a peculiar small, rocky body orbiting between Saturn and Uranus, possessing qualities of both asteroids and comets – was discovered to have rings. Now MIT scientists say that a second minor planet – called Chiron – may have rings. They announced their results this week (March 16, 2015) and published them in the journal Icarus.

If not rings, these scientists say, then Chiron might have jets, or a shell of dust. That would be interesting, too.

Both Chariklo and Chiron belong to a relatively new class of objects in our solar system called centaurs. They orbit the sun beyond the orbit of the fifth planet, Jupiter. A century ago, scientists didn’t know of objects in this region of space. Most asteroids, after all, orbit closer in, between the orbits of Jupiter and the fourth planet, Mars. Astronomers found the first centaur (Hidalgo) in 1920. Astronomers didn’t realize there would be more objects in this part of space until they found Chiron in 1977. Now Chariklo is the largest confirmed centaur at 160 miles (260 km) in diameter. Chariklo is as big as a mid-sized main-belt asteroid.

Chiron is at least 80 miles across (130 km), maybe larger. The MIT scientists found its possible ring system from Earth, after observing an event in 2011 in which Chiron passed in front of a star, briefly blocking its light. After this stellar occultation by Chiron, the researchers analyzed the star’s light emissions, and the momentary shadow created by Chiron, and identified optical features that suggest Chiron might possess a ring system, a circular shell of gas and dust, or symmetric jets of material shooting out from Chiron’s surface. 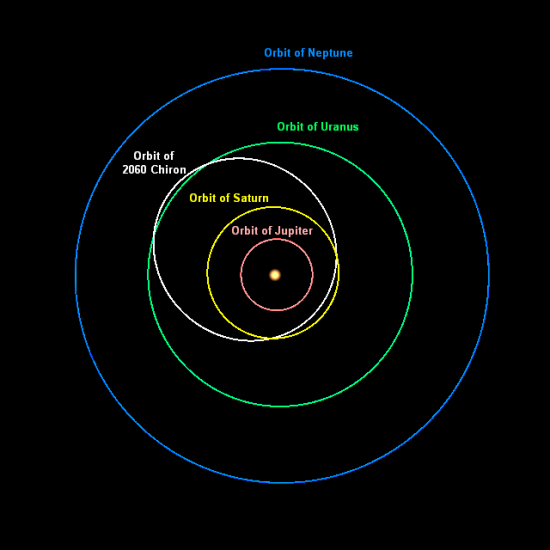 Orbit of Chiron, via Reyk at Wikimedia Commons

Astronomer and study team member Amanda Bosh of MIT’s Department of Earth, Atmospheric and Planetary Sciences said in a statement:

It’s interesting, because Chiron is a centaur — part of that middle section of the solar system, between Jupiter and Pluto, where we originally weren’t thinking things would be active. But it’s turning out things are quite active.

Today, scientists estimate there are more than 44,000 centaurs in the solar system, concentrated mainly in a band between the orbits of Jupiter and Pluto. While most centaurs are thought to be dormant, scientists have seen glimmers of activity from Chiron. Starting in the late 1980s, astronomers observed patterns of brightening from the centaur, as well as activity similar to that of a streaking comet.

In 1993 and 1994, James Elliot, then a professor of planetary astronomy and physics at MIT, observed another occultation of a star by Chiron and in that way was able to make the first estimates of its size. At the time, Elliot also observed features that he said looked like jets of water and dust spewing from the centaur’s surface.

The new MIT study observed something similar to what Elliot observed in the 1990s. They saw symmetrical, sharp features near the start and end of the stellar occultation – suggesting that material such as dust might be blocking a fraction of the starlight. The MIT researchers saw two such features, each about 300 kilometers from the center of the centaur. Judging from the optical data, the features are 3 and 7 kilometers wide, respectively.

Until Chariklo’s rings were found, it was commonly believed that these smaller bodies don’t have ring systems. If Chiron has a ring system, it will show it’s more common than previously thought. 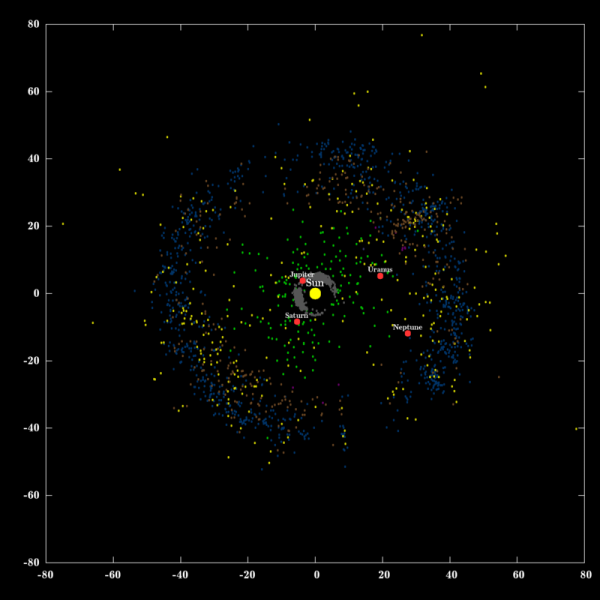 View larger. | Positions of known outer solar system objects. The centaurs are those objects (in green) that lie generally inwards of the Kuiper belt (in blue) and outside the Jupiter Trojans (grey). Image via Dr. Wily D / Wikimedia Commons

Bottom line: An occultation of a star by the minor planet Chiron – an event in which Chiron passed in front of a star – has revealed that this tiny world in the outer solar system might have its own system of rings. If so, it’s the second minor planet and sixth solar system body known to have rings.