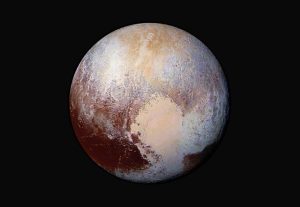 New Horizons scientists use enhanced color images to detect differences in the composition and texture of Pluto’s surface. When close-up images are combined with color data from the Ralph instrument, it paints a new and surprising portrait of the dwarf planet. The “heart of the heart,” Sputnik Planum, is suggestive of a source region of ices. The two bluish-white “lobes” that extend to the southwest and northeast of the “heart” may represent exotic ices being transported away from Sputnik Planum.

Four images from New Horizons’ Long Range Reconnaissance Imager (LORRI) were combined with color data from the Ralph instrument to create this enhanced color global view. The images, taken when the spacecraft was 280,000 miles (450,000 kilometers) away, show features as small as 1.4 miles (2.2 kilometers).

Thank you! Your submission has been received!
Oops! Something went wrong while submitting the form.
END_OF_DOCUMENT_TOKEN_TO_BE_REPLACED