Closest views yet of Nix and Hydra 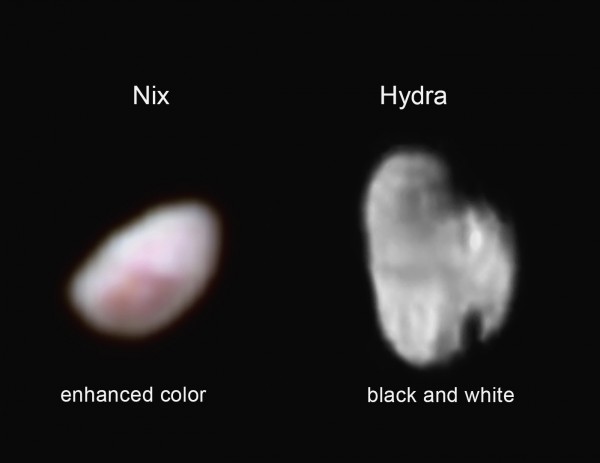 Here are Nix and Hydra, getting their moment of fame following the passage of the New Horizons spacecraft on July 14, 2015. I understand that there are sharper images coming.

Nix from this angle appears kidney-bean-shaped and has a relatively smooth profile at this resolution of 1.9 miles (3 km). There is a curious reddish circular area with a brighter center, most likely an impact crater. New Horizons was 102,000 miles (165,000 km) from Nix at the time. The image shows the dimensions of Nix, to be 26 miles (42 km) long and 22 miles (36 km) wide.

Hydra is Pluto’s outermost known moon. Here Hydra is seen to be very irregular in shape with a crater largely in shadow at the bottom, another crater on the top of the wide portion. There is a lobe protruding further up, with a curious greyer area in between. The resolution is 0.7 miles (1.2 km) and New Horizons was 143,000 miles (235,000 km) from Hydra at the time.