New analysis of data gathered from New Horizons’ 2015 flyby of Pluto shows evidence of Earth-like snow-capped mountains and the potential for glaciers made of methane ice. 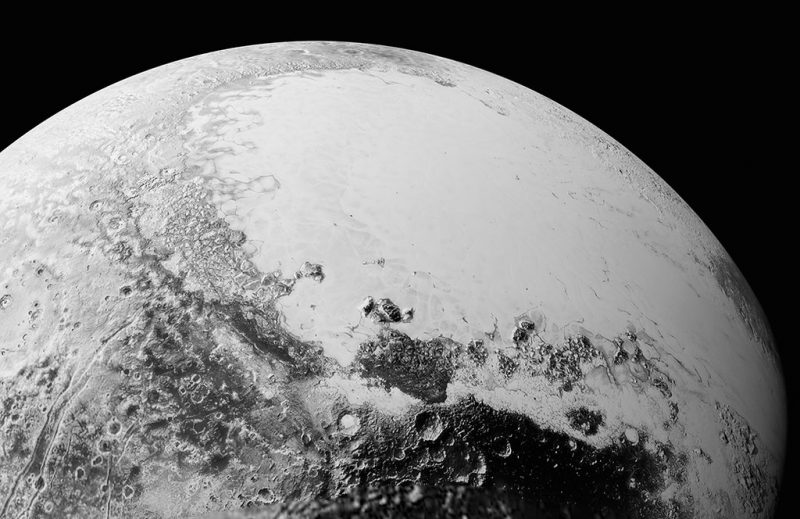 This article – written by Kelcie Walther – is republished with permission from GlacierHub.

As winter approaches and snow blankets Earth’s peaks, they may not look so different from a mountain vista on a planet 3.2 billion miles farther from the sun. A paper published October 13, 2020, in the journal Nature describes Pluto’s ice capped mountains. The Pigafetta and Elcano Montes in the eastern Cthulhu region of Pluto have summits that, according to the study’s authors:

The findings come from new analysis of data gathered in 2015 from a long-range reconnaissance imager and a multispectral visible imaging camera, instruments that were aboard NASA’s New Horizons spacecraft.

Tanguy Bertrand, a NASA postdoctoral fellow at the Ames Research Center and the lead author of the study, explained how the team drew these conclusions about Pluto’s similarity to Earth:

We analyzed spectra obtained from the surface, by fitting these spectra with models based on laboratory experiments. This allows us to understand what the composition of the surface is.

This isn’t the first time that discoveries about the icy nature of Pluto’s surface have been made from New Horizons data; in 2017, GlacierHub reported on the discovery of penitentes, jagged spires of frozen methane and nitrogen, in the Tartarus Dorsa area of Pluto. The new finding is, however, the most complete picture we have so far of a landscape that resembles Earth’s own so closely.

Glaciers and sheet ice on Earth result from an accumulation of snow over time. Earth’s temperatures are lower at higher altitudes, so tall mountain peaks stay cold and snow accumulates to form ice. Because of Pluto’s thin atmosphere, its surface stays consistently cold, and as the sun warms its thin atmosphere, temperatures actually rise with altitude.

The ice on Pluto is made not of water, but of frozen methane (and sometimes nitrogen) gas. Pluto lacks the conditions to create the kinds of weather events we have on Earth, so it doesn’t snow and there isn’t any wind. Rather than coming from snow, Pluto’s ice builds up from methane frost, which is formed when vapor condensates into ice directly on surfaces. 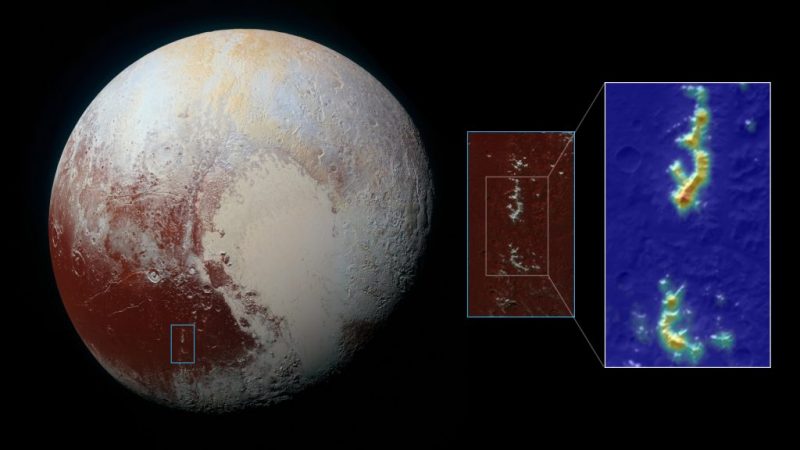 An image from the New Horizons flyby in 2015 with an enlarged image of the Pigafetta Montes. The colored slopes on the right show areas where methane ice is found. Image via NASA Ames Research Center.

In an interview with GlacierHub, Bertrand explained:

Pluto’s atmosphere has more gaseous methane at its warmer, higher altitudes. This allows that gas to saturate and freeze directly on the mountain peaks tall enough to reach the [methane-]enriched zone.

As methane frost accumulates on Pluto’s tall peaks, it likely forms thick ice, much as an accumulation of snow does on Earth. But ice melts on Earth, while on Pluto the only factor that breaks down ice is sublimation, the process through which a substance, in this case methane, goes straight from the solid state to the gaseous state. The exact thickness of the ice on Pluto’s mountains is currently unknown, but it is likely that more frost forms than can be sublimated.

There are likely thick layers of methane ice on Pluto, but do they move like glaciers? Thick ice on Earth qualifies as a glacier when gravity pulls it downslope, causing it to slide. In order for thick ice on Pluto to meet the criteria for being classified as a glacier, it needs to show the same downslope movement. A certain mass of ice is needed to trigger downslope movement, and Pluto’s conditions most likely make accumulating this mass a slow process.

While the current thickness of the methane ice in the Pigafetta and Elcano Montes is unknown, Jeffery Kargel, a senior scientist at the Planetary Science Institute, estimates that under Pluto’s low gravity, which is only 6% of Earth’s gravitational force, ice would need to be about 100 meters (330 feet) thick to flow downslope.

On Pluto, such an accumulation of ice could occur over a long timescale. Kargel told GlacierHub:

It could be around 5 millimeters of added methane ice per Pluto year. So around 20,000 Pluto years (close to 5 million Earth years) would be required to make a methane glacier 100 meters thick.

On Earth, by contrast, enough snow to form a glacier can accumulate over the course of as few as 100 years. 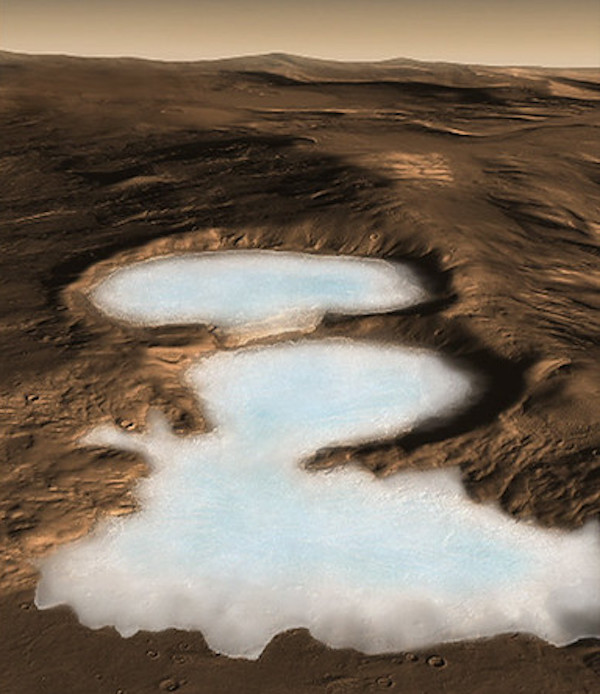 Artist’s rendering of a glacier on Mars. Image via NASA/JPL.

Though it would take many years to form glaciers on Pluto, both Bertrand and Kargel believe that glaciers probably do exist on the dwarf planet. Kargel said:

Glaciation – in one chemical form or another – is probably not so rare in the cosmos and our own little solar system. If you get piles of brittle-ductile solids supplied by atmospheric transport, the piles will flow under force of gravity.

Pluto’s glaciers, if they exist, wouldn’t be the only extraterrestrial glaciers out there. NASA found evidence of glaciers on Mars more than 10 years ago. Mars is much closer to Earth, and a great deal more is known about its appearance and geography. Mars has long occupied a place in the imagination of Earthbound humans; stories of the “red planet” and Martians have been a part of popular culture for years. The new discoveries about the Pigafetta and Elcano Montes on Pluto raise the idea that planets much farther from Earth might share some similar characteristics with our home planet.

Pluto is at the far reaches of our solar system. Very little was known about its surface until the New Horizons mission. With this new vision of Pluto’s mountains as reminiscent of the Rockies or Himalayas, the dwarf planet feels less far away than the 9.5 years it took the New Horizons spacecraft to reach it.

Bottom line: An analysis of data gathered from New Horizons’ 2015 flyby of Pluto shows evidence of Earth-like snow-capped mountains made of methane ice that bear a striking resemblance to terrestrial alpine landscapes.

Source: Equatorial mountains on Pluto are covered by methane frosts resulting from a unique atmospheric process