The hills are thought to be fragments of Pluto’s rugged uplands that have broken away and are being carried along the flow paths of glaciers. 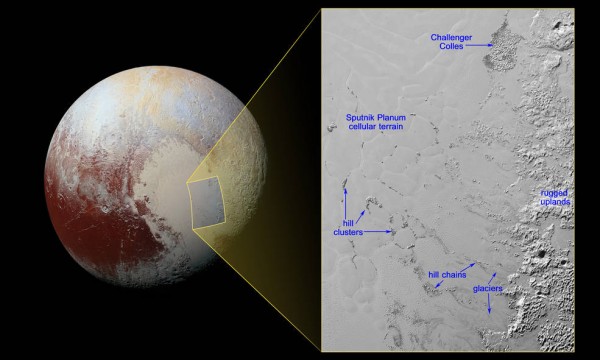 View larger. | Hills of water ice on Pluto ‘float’ in a sea of frozen nitrogen. They’re thought to move slowly over time, somewhat like icebergs in Earth’s Arctic Ocean. For the scale here, notice the feature informally named Challenger Colles – honoring the crew of the lost Space Shuttle Challenger. It appears to be an especially large accumulation of these hills, measuring 37 by 22 miles (60 by 35 km). Image via NASA/JHUAPL/SwRI.

Just when you think Pluto couldn’t get any more fascinating, it does. NASA said on February 4, 2016 that numerous, isolated hills – possibly fragments of water ice from Pluto’s surrounding uplands – are floating on the nitrogen ice glaciers on the little world’s surface. This is happening in the beautiful heart-shaped feature on Pluto known as Sputnik Planum. NASA said the hills individually measure one to several miles or kilometers across. The images suggesting them come, of course, from NASA’s New Horizons spacecraft, which streaked past Pluto last July and is still sending its data back to Earth. In a statement, NASA said the hills are:

… likely miniature versions of the larger, jumbled mountains on Sputnik Planum’s western border. They are yet another example of Pluto’s fascinating and abundant geological activity.

Because water ice is less dense than nitrogen-dominated ice, scientists believe these water ice hills are floating in a sea of frozen nitrogen and move over time like icebergs in Earth’s Arctic Ocean.

The hills are likely fragments of the rugged uplands that have broken away and are being carried by the nitrogen glaciers into Sputnik Planum. ‘Chains’ of the drifting hills are formed along the flow paths of the glaciers.

When the hills enter the cellular terrain of central Sputnik Planum, they become subject to the convective motions of the nitrogen ice, and are pushed to the edges of the cells, where the hills cluster in groups …

New Horizons obtained the inset image above – showing the hills – at a range of approximately 9,950 miles (16,000 km) from Pluto, about 12 minutes before New Horizons’ closest approach to Pluto on July 14, 2015.